Mishriff To Return To Turf In The Sheema Classic 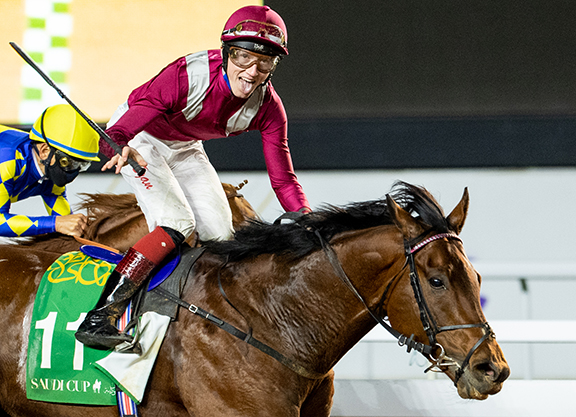 Saudi Cup winner Mishriff (Ire) (Make Believe {GB}) will make his next appearance in the G1 Dubai Sheema Classic on Dubai World Cup night at Meydan on Mar. 27, Racing Post reports. After winning the world's richest race in his second try on the dirt, the 4-year-old Mishriff had been considered a leading candidate for the $12-million G1 Dubai World Cup, but he will instead return to the turf for the $6-million Sheema Classic and step up to a mile and a half for the first time. Mishriff won the G1 Prix du Jockey Club and G2 Prix Guillaume d'Ornano last summer.

Trainer John Gosden told Racing Post, “This morning we've accepted an invitation for Mishriff to run in the Dubai Sheema Classic. He's a versatile horse and we've always wanted to try him over this trip of a mile and a half. This will then give him plenty of time for a break before tackling Royal Ascot in June and the Eclipse S. at Sandown the following month.”