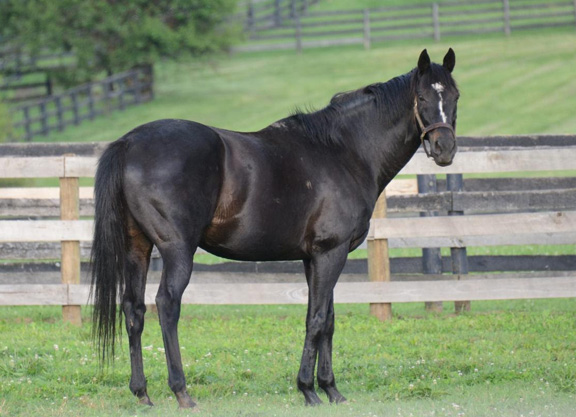 War Emblem (Our Emblem-Sweetest Lady, by Lord at War), winner of the 2002 GI Kentucky Derby and GI Preakness S. died early Wednesday morning at Old Friends Thoroughbred Retirement Center in Georgetown, Kentucky. Pensioned at Old Friends since 2015, he was 21. While the cause of death is thought to be the result of a paddock accident, exact details are unknown. However, results from a necropsy report are expected to be forthcoming.

In 2015 Old Friends re-repatriated War Emblem from the Yoshida family’s Shadai Stallion Farm in Japan. He was the second Kentucky Derby winner returned to the Bluegrass by Old Friends from overseas. Silver Charm, 1997 winner, arrived in 2014.

Bred by Charles Nuckols Jr. & Sons, War Emblem–who was originally campaigned by Russell Reineman and trainer Frank Springer–won the GII Illinois Derby for those connections before being purchased by Prince Ahmed bin Salman’s Thoroughbred Corp. and transferring to Bob Baffert. In his first start following his private sale, the near-black colt annexed the Kentucky Derby and added a win in the second jewel in the Triple Crown two weeks later. Denied the Triple Crown after stumbling badly at the start of the GI Belmont S., the $20,000 Keeneland September yearling purchase finished eighth by long-shot Sarava, who is also a retiree at Old Friends. After the Belmont, War Emblem won the GI Haskell Invitational H. before finishing off the board in the GI Pacific Classic and GI Breeders’ Cup Classic. Retired with 13 starts, 7 wins, and earnings of $3,491,000, he was sold in the fall of 2002 to the Yoshida family for $17 million to stand at Shadai Stallion Station in Hokkaido, Japan.

“We’re very grateful to Mr. Yoshida and all of the fans who helped get War Emblem to Old Friends nearly five years ago,” said Old Friends founder and President Michael Blowen. “I know we’re supposed to appreciate all of our retirees the same but he was one of the very special ones. He was tough, narcissistic, bold and handsome. I adored him. I proudly count among a very meager number of accomplishments the day he allowed me to put his halter on without biting me. He trusted me. What more could I ask for? The farm will recover from his loss over time, but it’ll never be the same.”