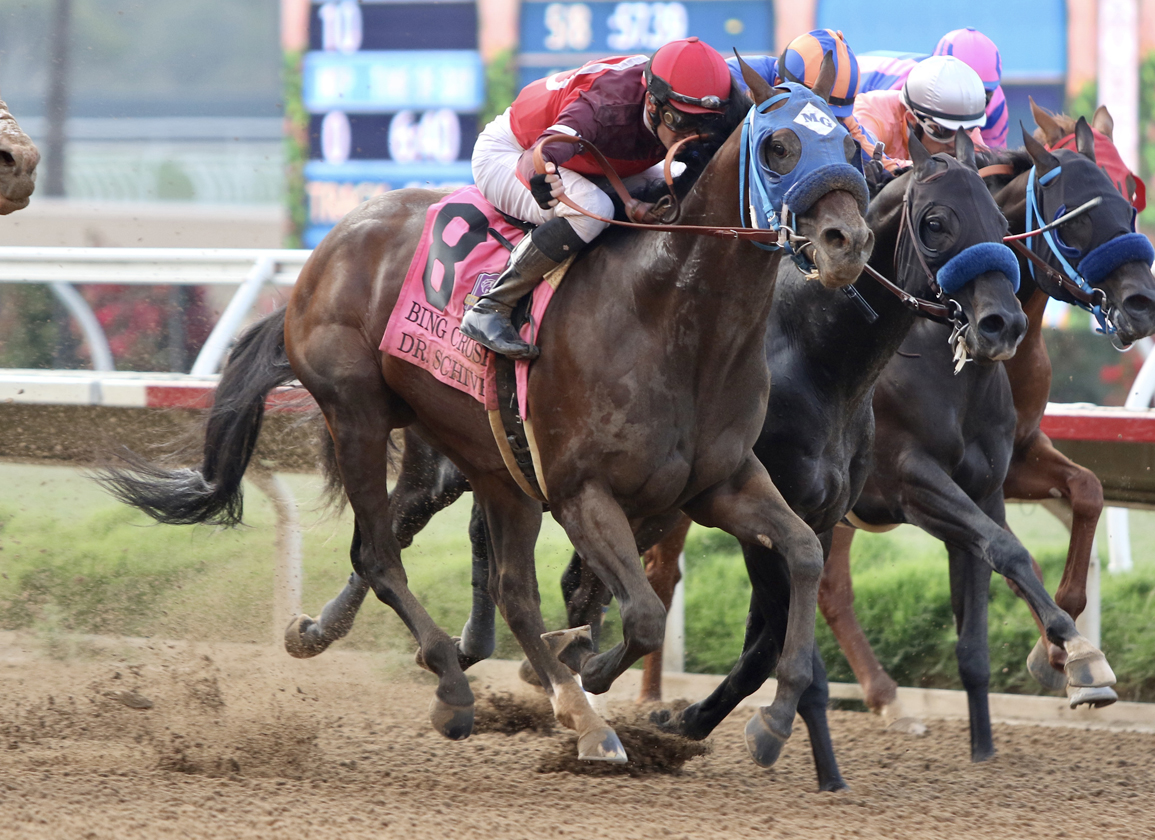 Sent off the 12-5 second favorite while facing his elders in Saturday's GI Bing Crosby S., a 'Win and You're In' qualifier for the GI Breeders' Cup Sprint over course and distance in November, Dr. Schivel (Violence) jumped fairly from an outside gate and was outsprinted through the early stages, covering favored C Z Rocket (City Zip) from the second flight. Beginning to warm up to the task three-eighths out, Dr. Schivel was flushed four wide outside of Eight Rings (Empire Maker) into the lane, was put to a left-handed drive at the furlong grounds and outfinished Eight Rings for the victory. C Z Rocket raced far back into the final 2 1/2 furlongs and found his best stride too late. The race lost some of its luster when defending champion Collusion Illusion (Twirling Candy)–a stablemate of Dr. Schivel's–was scratched, having grabbed a quarter training Friday.

“This is a real racehorse,” said winning trainer Mark Glatt. “He beat the olders today, and hopefully in November he'll be able to do it again.”

A maiden winner at third asking for former trainer Luis Mendez, Dr. Schivel added the GI Runhappy Del Mar Futurity before being given the balance of the year off. Programmed for a late-season sophomore campaign, he returned to action with a tough neck victory in a six-furlong Santa Anita allowance June 18.

With his Futurity victory late last summer, Dr. Schivel became the third of three Grade I winners in 2020 for his sire, joining 'TDN Rising Star' No Parole and Volatile. One of 31 stakes winners (11 grade) for Violence, he is the only black-type winner from a daughter of former Jeff Bonde trainee Mining for Money (Mining), a half-brother to MGSW Intrusion (Top Command), who was a maiden winner and stakes placed in two trips to the post. A half-sister to GI Clement L. Hirsch S. winner Ultra Blend (Richly Blended), Lil Nugget is the dam of the 2-year-old colt Barsini Red (Midshipman), did not produce a foal in 2020 or this year and was most recently bred to Anthony's Cross.