Dr. Schivel Back in Training with Mark Glatt 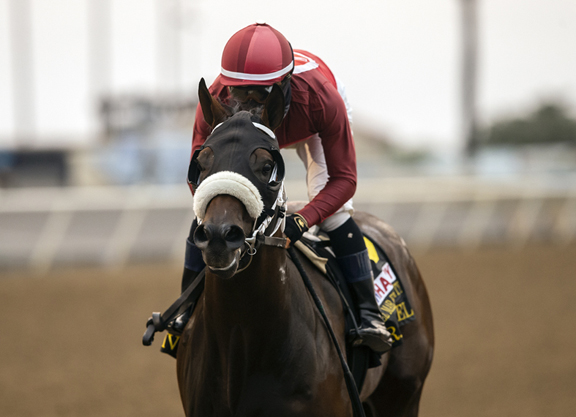 Dr. Schivel (Violence), sidelined since recording an impressive victory in the GI Runhappy Del Mar Futurity Sept. 7, has returned to light training at Mark Glatt's Santa Anita base with an eye on a late spring/early summer return.

“He's been back in training for approximately a month and seems to be doing quite well so far,” Glatt said. “We will start picking it up with him now. The first month, you're just doing a lot of jogging and legging up. So not a hell of a lot to report at the moment, but he's healthy. He grew up quite a bit and he's filled out into his frame as most 2-year-olds turning three do. We're just looking forward to putting a little bit more pressure on him now, getting some workouts into him and seeing where he can take us this spring and summer.”

After announcing his presence with a powerful maiden victory over Spielberg (Union Rags) at third asking for his co-breeders William A. Branch and Arnold R. Hill at Del Mar last summer, Red Baron's Barn, Rancho Temescal and William Dean Reeves joined the ownership group ahead of his final start for trainer Luis Mendez, a 1 3/4-length, stalk-and-pounce victory over that same rival in the seven-furlong Del Mar Futurity.

Dr. Schivel, a $37,000 RNA as a KEEJAN short yearling, was produced by a half-sister to GISW Ultra Blend (Richly Blended). He was one of three North American Grade I winners for young sire Violence in 2020.

“Playing it by ear,” Glatt said when asked if Dr. Schivel was close to breezing. “We're going a little bit slower with him this first month or two than we normally would given the type of issues that he had and the reasons he was turned out. I would certainly say, conservatively, I expect to be breezing him here by the end of this month.”

Regarding the ailments that kept Dr. Schivel on the shelf, Glatt added, “I really don't want to be too specific. He did not require surgery. He had multiple minor things going on that could've turned into dangerous things and we erred on the conservative side with him.”

The aforementioned Spielberg has since added to his resume with a third-place finish in the GI American Pharoah S., a narrow win in the GII Los Alamitos Futurity and a second-place finish behind returning champion Essential Quality (Tapit) in last weekend's GIII Southwest S. at Oaklawn Park.

“It's very exciting,” Glatt said of having Dr. Schivel join his barn. “I haven't ever even breezed the horse myself yet, but obviously his record speaks for itself. It's been nice to follow Spielberg, who he beat pretty handily in the Del Mar Futurity. He's maintained his form and that's always good to see. If you have a horse on the bench and you're paying attention to the horses that they beat, I think that gives you a very good indicator as to where your horse fits down the road. It's been good to see Spielberg holding his own.”

Glatt concluded, “At the moment, I'm just focusing on keeping him healthy and getting him back to the races. If we do that part of it, the races will be there. When we get closer, we'll map out a plan.”