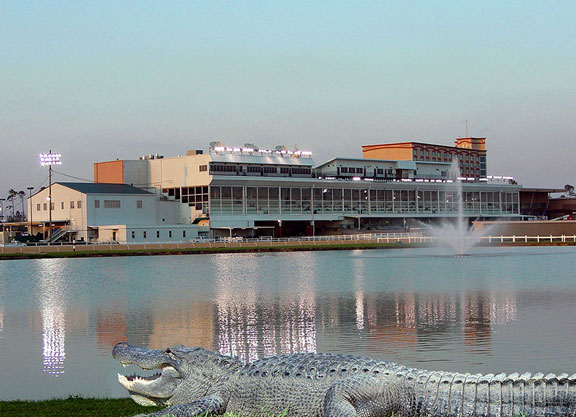 While no horses or people suffered major injuries as a result of Hurricane Laura, the storm produced serious damage to Delta Downs in Vinton, Louisiana, leaving the facility in such bad shape that its director of racing operations Chris Warren said there was no chance the track would be able to begin its Thoroughbred meet on time.

“This meet is supposed to start Oct. 6. That isn't going to happen,” Warren said. “There's no way. When it will happen, I have no idea.”

Warren was on the scene at Delta Thursday morning and reports that the damage was extensive.

“There's debris and sheet metal everywhere,” he said. “The tote board got demolished. It collapsed and is completely gone. Our camera towers are gone, so is our holding barn. The starting gates got completely turned over and the light poles are torn up. The whole backside rail is pretty much ruined. There's just a lot of damage and it is everywhere.”

Hurricane Laura made landfall at about 1 a.m. Thursday near Cameron, Louisiana about 30 miles south of Delta Downs, which is located in the town of Vinton. Winds were recorded at more than 150 miles per hour.

Delta Downs ended its quarter horse meet Saturday, but hundreds of horses and workers were still on the grounds when Laura hit. A mandatory evacuation order, which also covered horses, was issued for Vinton effective Tuesday. Warren said there were a number of workers who remained on the backstretch because they had nowhere else to go and that about 600 quarter horses were also on the grounds when the hurricane hit.

Management was prepared for the worst.

“Everyone was told to leave but they didn't,” he said. “There were people who had nowhere to go. It could have definitely been worse. We could have had 20 horses and two people get killed back there. We were amazed that it wasn't worse.”

Warren said a key to keeping the horses safe was that the barns held up relatively well and none of the barn roofs blew off.

Warren said that Evangeline Downs, which, like Delta, is owned by Boyd Gaming, did not suffer any serious damage. It is east of Delta in the town of Opelousas. Evangeline had canceled its Wednesday and Thursday cards before the hurricane hit. Evangeline is still scheduled to resume racing Friday night. Its meet ends Saturday.