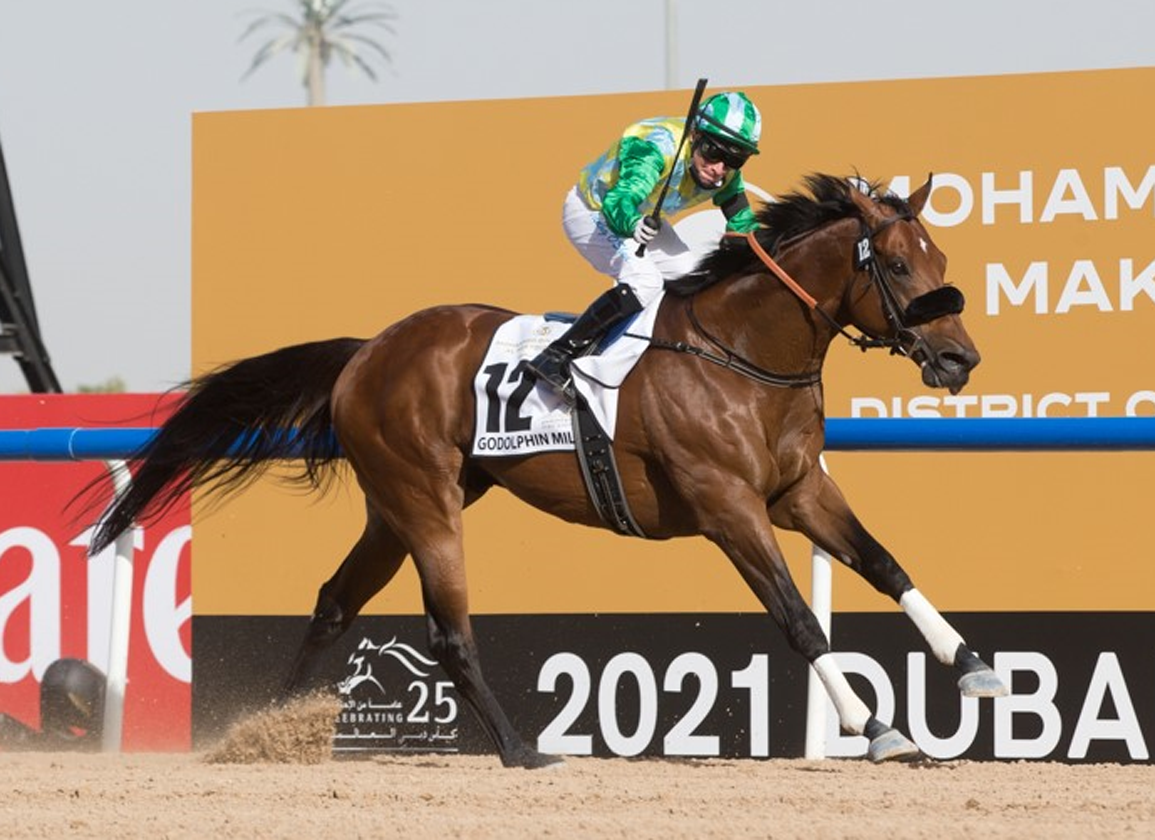 The 2022 Dubai World Cup Carnival lasts from Jan. 14-Mar. 5, Super Saturday and begins on Friday. The 19th edition of the DWCC features enhanced purses and a new group of turf races, the Jumeirah Series. Anchoring the first seven-race card-six Thoroughbred and one Arabian race–is the $250,000 G2 Al Maktoum Challenge Round 1 Presented by Nakheel, which attracted a field of 14.

“Secret Ambition has a good draw [stall five], is fit, healthy, and good to go,” said Seemar, who also saddles dual Meydan winner Imperial Empire (GB) (Dubawi {Ire}), 2020 Al Maktoum Challenge R1 victor Kimbear (Temple City), the two-for-two Kafoo (Curlin) and 2021 Godolphin Mile third Avant Garde (Tonalist). “Kafoo is drawn 10 but is unbeaten this season. He's doing everything right. I only hope inexperience doesn't catch him because he's definitely got the talent to be up there to compete against this class of horses.

“Imperial Empire is a Dubawi and is a half-brother to a Group 1 winner, so hopefully he should show up. Kimbear ran a good race on his debut for us but unfortunately he's drawn a bit on the outside [stall 11], while Avant Garde is doing really well. This is his minimum trip, he would rather go over a mile and quarter, but it's a good place to start him.”

Said Watson, who also sends out Midnight Sands (Speightstown) and Golden Goal (Ire) (Dark Angel {Ire}), “They're all doing well at home. We were a bit disappointed with Midnight Sands last time [when unplaced in the Listed Dubai Creek Mile on Dec. 16] but it was his first run after a long lay-off. He's been training well since.

“Thegreatcollection and Golden Goal are both in great shape. They both ran well recently after being off for the track for eight to nine months. It looks like they've come on so we're hoping they all run well.”

The Grass is Greener

Just after the Al Maktoum Challenge Round 1 is the G2 Cape Verdi, also over a mile, for fillies and mares on grass. The royal blue silks of Godolphin have been carried to victory in the race nine times already, and trainer Saeed bin Suroor has a pair entered, among them Soft Whisper (Ire) (Dubawi {Ire}), the Listed UAE 1000 Guineas victress of last year. Although off the board in a Riyadh after her Guineas win in January, she failed to see out the 1900 metres of the G2 UAE Derby on dirt in March. Returned to the UK, she ran out a 1 3/4-length winner in the Listed Rosemary S. at Newmarket in September going this trip, but gave way and finished ninth in the 2000-metre G3 Pride S. there on Oct. 8.

“She ran well last year, here in Dubai and also when we took her back to England,” said bin Suroor. “She won listed races on both dirt and turf. This looks like it is the right race to start her four-year-old campaign as she has been pleasing us at home.”

Bearing the second-string white cap is Stunning Beauty (Ire) (Shamardal), who was third after briefly leading in a Goodwood conditions race in August.

“Stunning Beauty showed better form in the UK last season and has been going well at home, so I'm hoping for a nice performance over a trip that suits,” said Bin Suroor.

Successful in the past three renewals, Appleby said, “Wedding Dance improved from her first to second run last season, winning nicely at Wolverhampton on the latter occasion.

“The plan was always to bring her out to Dubai afterwards and we have been pleased with the way she has been training out here. She will potentially come forward for this, but we feel that she is ready to have a run and should be competitive.”

Mnasek (Empire Maker) appears to be the main threat to shake up the Godolphin domination. Raced exclusively at Meydan for her five starts to date, she was a distant second to Soft Whisper after a slow break in the 1900m UAE 1000 Guineas, but thrived in the G3 UAE Oaks last February. Only ninth in the colts' equivalent on Dubai World Cup night, she returned on Nov. 18 to run second in a rated conditions heat, but this will be her turf bow.

Billed as turf prep races for the new $300,000 1400-metre grassy Ras Al Khor on Super Saturday, Mar. 5, the Jumeirah Series also begins on Friday with the 1400-metre Jumeirah Classic Trial Presented by Palm Jumeirah. Saeed bin Suroor fields Home City (Ire) (Profitable {Ire}) with Frankie Dettori in the irons with an eye to the European Classics. The colt ran second in a nursery handicap at Goodwod in October and is one of two in the race for Godolphin, with Charlie Appleby's Sovereign Prince (GB) (Dubawi {Ire}) a winner over this trip at Epsom on Sept. 26. The highest rated horse in the eight-strong race is Alice Haynes's Mr Professor (Ire) (Profitable {Ire}), who found soft going to his liking in the Listed Silver Tankard S. at Pontefract on Oct. 18.

Leading on ratings in the turf sprint is Motafaawit (Ire) (Intikhab), one of five for the late Sheikh Hamdan's Shadwell operation. The gelding was fifth most recently in the Mar. 27 G1 Al Quoz Sprint. He locks horns with Listed Dubai Sprint hero Man of Promise (Into Mischief) from the Appleby yard.