Curlin Colt On Top As Keeneland Powers Into Book 3 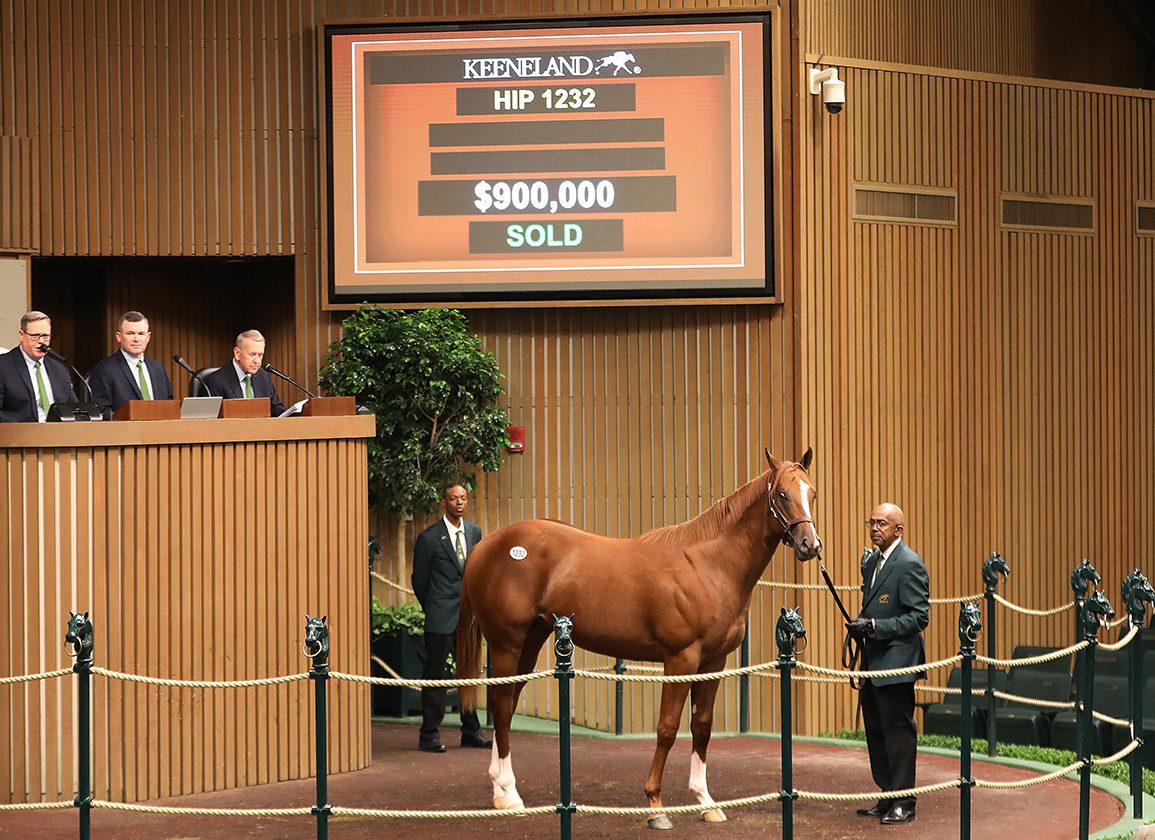 LEXINGTON, KY – The Keeneland September Yearling Sale might have taken a day off Friday, but the auction lost none of its momentum when bidding returned for the first of two Book 3 sessions Saturday in Lexington. A colt by Curlin paced another competitive session when selling for $900,000 to the BSW/Crow Colts partnership. For the session, 287 yearlings grossed $50,747,500. The session average was $176,821–up 5.69% from last year's corresponding session–and the median rose 3.7% to $140,000.

Saturday's session began on a familiar note when Jacob West, bidding on behalf of the omnipresent Repole Stables, signed for the very horse through the ring and, by the end of the session, Mike Repole's name was on the tickets of 67 yearlings for the entire sale for a gross of $25,420,000.

St. Elias Stables, a partner on many of the Repole purchases this week, is named on the tickets of 44 head for a gross of $18,210,000. Bloodstock agent Michael Wallace was in action for four yearlings purchased soley for Vinnie Viola's operation Saturday, led by a $725,000 son of Omaha Beach.

“Obviously, we've been a big part of the market, but it's been incredibly strong across the board and we haven't had things all our own way either,” Wallace said Saturday. “Everybody still has a lot of horses to try to buy and people still have plenty of money in their pockets. I think what we've seen here is a push-down in the market and we will see into today and tomorrow and probably into the next week. Probably if you had asked me three weeks ago, would it be this strong, I would have said no. But after seeing Book 1 and knowing people were getting pushed back to the next day, it was always going to end up like this.”

Peter O'Callaghan's Woods Edge Farm continued to enjoy strong results in the sales ring at Keeneland. The operation sold 10 horses Saturday for $2,787,500, led by a $700,000 colt by Arrogate.

“The market is excellent, but you've got to be good,” O'Callaghan said. “It's so hard for breeders and pinhookers to breed or purchase a very nice foal. So when we do have one, it's just so gratifying to get rewarded like that. Because believe me, we go through enough of the ones that don't qualify. When it all falls into place, it's extremely gratifying, but also there is a lot of relief involved.”

O'Callaghan continued to see a polarization in the marketplace, with leading buyers all landing on the same horses.

“Everybody is very selective in what they want,” he said. “They really know what they want. Most of these guys are almost all on most of the same horses. They can't all buy the same ones. They win one, they lose one, they just have to keep going. They want to buy in the top 10% of each session. And so those horses are so highly sought after and they sell very well, but the next ones down don't quite hit the headlines.”

The Keeneland September sale continues through Saturday with sessions beginning daily at 10 a.m.

The BSW/Crow Colts Group/Spendthrift/Gandharvi made its biggest purchase of the Keeneland sale so far when going to $900,000 to acquire a colt by Curlin (hip 1232). The yearling was consigned by Elm Tree Farm as agent for his breeder, Barbara Banke's Stonestreet.

“It's been very hard to buy this sort of horse,” admitted Brad Weisbord after signing the ticket on the yearling. “Obviously we stretched a little bit.”

The high-profile colt-buying partnerships of Mike Repole and Vinnie Viola and SF/Starlight/Madaket have dominated the marketplace at Keeneland this week. That domination forced Weisbord and team to modify its approach Saturday.

“We try to buy them a little cheaper, but Liz [Crow] and [Spendthrift's] Ned [Toffey] said to keep going, so that's what we did,” Weisbord said. “We try to stay in the $500,000-$600,000 range, but he was, for us, the top colt today, so we stretched a little bit. I believe the breeder is going to stay in for a piece, so we love to have them. We think they are one of the top breeders in the game. For us, all of the stars lined up. And hopefully we will see him next year in the big races.”

Hip 1232 is out of Tangere (Malibu Moon), a half-sister to Grade I winner Tara's Tango (Unbridled's Song) and Visionaire (Grand Slam). The 9-year-old mare, in foal to Hard Spun, sold for $52,000 at this year's Keeneland January sale.

The BSW/Crow Colts Group has now purchased 11 yearlings through five sessions of the 12-day auction for a total of $4,840,000.

Bloodstock agent Ben McElroy, bidding on behalf of an undisclosed client, acquired a colt by Bolt d'Oro (hip 1320) for $775,000 midway through Saturday's session of the Keeneland September sale. The yearling, consigned by Hill 'n' Dale Sales Agency on behalf of breeder George Krikorian, is out of the unraced Beautified (Congrats) and is a half-brother to 2021 GI Del Mar Debutante runner-up Dance to the Music (Maclean's Music).

“He is by Bolt d'Oro, who is off to a very good start to stud,” McElroy said of the yearling's appeal. “He's already had a graded stakes winner and a lot of winners, whether in Europe or Saratoga. He's just winning at all the top tracks and it looks like, as they go further distances, they are going to get better.”

“I remember this colt's sister at the 2-year-old sale,” McElroy said. “She was a really nice filly who breezed great. I remember when she broke her maiden at Del Mar, she was very impressive and subsequently she was second in the Del Mar Debutante. So that gave us a bit of extra confidence. We just really believed in what the mare had thrown so far.”

McElroy said he has seen an increased focus on sire power in the sales ring in recent years.

“I think, on the ones who are by the right sires and vet, it's extremely strong,” he said of the market. “There are obviously spots where people have trouble with vetting and maybe do not have the right sire. There is a huge emphasis on sire power. I think in the last two years, if you have the right sire, you are getting double, if not triple, what you probably should.”

Krikorian purchased Beautified's dam Makeup Artist (Dynaformer) for $250,000 at the 2001 Keeneland September sale and the mare won the 2003 GIII Senorita S. in his colors.

“It's always tough to sell, but it's better to sell the dream then to buy the dream,” Krikorian said after watching the colt sell Saturday. “That's why we sell.”

He continued, “I probably have about 90 [mares]. And we breed mostly to sell. We couldn't afford to race them all.”

Vinnie Viola's St. Elias Stables, which has accounted for a huge portion of the market this week at Keeneland in its partnership with Mike Repole, as well as with other various partners and on its own, added a colt by Omaha Beach to its roster when bloodstock agent Michael Wallace, seated with St. Elias advisor Rory Babich, made a final bid of $725,000 to acquire hip 1370.

“We've been looking for an Omaha Beach and looking at them pretty hard and he was the one that got the attention of the whole team,” Wallace said. “We were determined to try to get him if we could. Obviously, we didn't think we would have to be pushed as far as we were by WinStar, but that's the nature of this week, it seems.”

Yearlings from the first crop of Omaha Beach (War Front) have been in demand all week at Keeneland, with Repole and St. Elias purchasing a colt (hip 336) by the multiple Grade I winner for $900,000 from the Clarkland Farm consignment and Peter Brant's White Birch Farm purchasing another son of the stallion (hip 123) for $775,000. In all, 38 yearlings by the sire have sold at Keeneland September for $9,705,000.

“They all seem to have good brains,” Wallace said of Omaha Beach's yearlings. “Walking around the grounds, they are handling things well. They have good strength across the back. I am liking the look of them. I think they are good, athletic horses and bigger than you'd think with the War Front line.”

Bred and consigned by the Cleary family's Clearsky Farms, hip 1370 is out of Color Me Flying (Distorted Humor), a half-sister to graded winner Teresa Z (Smart Strike) and from the family of My Flag and her daughter, champion Storm Flag Flying.

Clearsky purchased Color Me Flying for $250,000 at the 2014 Keeneland November sale. St. Elias purchased the mare's Into Mischief filly, Colorful Mischief, for $300,000 at the 2020 Fasig-Tipton Selected Yearlings Showcase. Her Quality Road filly sold for $700,000 to Juddmonte at last year's Keeneland September sale. The 10-year-old mare has an Audible weanling filly and she was bred back to Munnings this year.

The fledgling Lynnhaven Racing of Baton Rouge businessman Jim Bernhard and his wife Dana was in action early in Saturday's session of the Keeneland sale, purchasing a son of Audible (hip 1167) for $675,000, and the operation kept right on buying throughout the day. The couple had quick fire action later in the session when going to $700,000 to acquire a colt by Arrogate (hip 1436) from Woods Edge Farm and came back just hips later to pay that same price for a Street Sense colt (hip 1441) from Gainesway, as agent for Bonne Chance Farm.

Hip 1436 is out of Ghostslayer (Ghostzapper) and he is a half-brother to graded winner Biddy Duke (Bayern). The yearling was bred by Peter and Jenny O'Callaghan's Woods Edge Farm, which purchased Ghostslayer, in foal to Street Sense, for $110,000 at the 2018 Keeneland November sale. The mare's Street Sense filly sold for $215,000 at the 2020 Keeneland September sale before the O'Briens hit it out of the park with a $1.05-million City of Light colt out of the mare at last year's September sale.

“He was probably the most vetted horse we've had a in a couple of years,” Peter O'Callaghan said. “I have two pages of vettings on him. It was incredible. My wife Jenny and I bred him and he was a fabulous foal from day one. The mare is a beautiful, robust mare with a big hip on her and it was a great mix with Arrogate. It was a great result and we are delighted.”

The Bernhards, who did their bidding sitting alongside Equine Analysis Systems CEO Matt Weinmann, ultimately purchased eight yearlings for $2,870,000 to be the leading buyers Saturday.

Audible Colt a Score for Kinsman

The Steinbrenner family's Kinsman Farm made the most of a limited number of pinhooking prospects when selling a colt by Audible (hip 1167) for $675,000 to Jim and Dana Bernhard's Lynnhaven Racing early in Saturday's session of the Keeneland September sale. The team had purchased the colt for $85,000 at this year's Keeneland January sale.

“He did everything right for us,” said farm trainer Emily Dawson after watching the yearling sell alongside Jessica Steinbrenner and farm vice president Kevin Adler. “He was a little weaker when we bought him and he just really flourished on the farm. He got big and strong.”

About the colt's appeal in January, Dawson said, “He had a big, ground-covering walk. That's really why we bought him.”

“We do very little,” Dawson said of Kinsman's pinhooking program. “We bought three short yearlings this year. We just sort of dabble in it.”