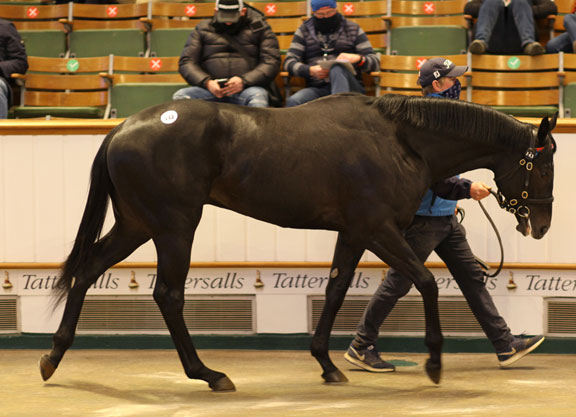 NEWMARKET, UK—”That's what I love about this place,” one shopper complained on Tuesday afternoon as a consignor extolled the virtues of the horse being paraded before him. “There's never any bad news.”

Well, he must have spent the last year under a rock.

Pretty universally, all that anyone in the European industry sought from the new breeze-up cycle at Newmarket this week was a renewed sense of stability. And, while the closing session of the Craven Sale at Tattersalls proved somewhat tougher going for vendors than the first day, there remained plenty of encouragement.

Last year, Tattersalls eventually put together a diminished Craven Sale the week after Royal Ascot. So direct comparisons are pretty pointless. But while average and median at the second session dipped to 70,116gns and 60,000gns respectively, for as many as 56 sold from 61 into the ring, the aggregate performance of this auction definitely felt like something to build on. Above all, the clearance rate—92% yesterday, 88% overall—was giddy even by the standards we learned to expect in the unnerving trading environment of 2020. A two-day median of 68,000gns put the market within hailing distance of the 70,000-77,500gns range achieved through four of the first five years of the bull run that started in 2014. The average of 85,897gns, on the other hand, has more ground to recover on consistent six-figure yields through that period. But at least the rollercoaster seems to be levelling out—and we know that the breeze-up specialists are a resilient lot.

Edmond Mahony, the Tattersalls chairman, took heart at the end of proceedings—being especially pleased with the reception of the £250,000 Royal Ascot/Group 1 bonus introduced this year, to supplement the £15,000 Craven bonus scheme.

“It is clear that owners have embraced these unprecedented bonuses,” Mahony said. “We have seen solid and diverse demand at all levels of the market from start to finish, producing the best Craven Breeze-Up clearance rate since 2000 and key indicators which have held up well, especially when taken in the context of the COVID-related challenges and restrictions which we are all still grappling with, and which continue to hinder international travel.

“Nevertheless, to hear consistently positive feedback from owners, trainers, agents and consignors about the bonuses has been gratifying, and reinforces our commitment to exploring as many innovative ways as possible to reward owners who buy at Tattersalls with extra prizemoney. There is no doubt that we will see plenty of this crop of Craven Breeze-Up graduates performing at a high level and it would be even more pleasing than usual if the Royal Ascot and Group 1 bonuses were won in the coming months.

“Despite the prolonged difficulties with international travel, overseas buyers have again demonstrated their appetite for high class Tattersalls breeze-up 2-year-olds. Buyers from America, Bahrain, Dubai, France, Italy, Qatar, Saudi Arabia and Singapore have all been active, many of them using the live internet bidding platform. As well as paying tribute to the consignors, who have as ever presented an outstanding collection of 2-year-olds, we must again commend everyone for their patience with the regulations and determination to overcome the obstacles we continue to face. We are still having to conduct sales under strict guidelines, but as well as looking forward to the forthcoming Guineas Breeze-Up and Horses-in-Training Sale, we are also looking forward to returning to more normality in the not-too-distant future.”

Yeomanstown Stud recorded two of the biggest sales of the session, albeit both had involved some pretty high stakes. If the yield was relatively conservative, that doesn't alter the fact that both were valued among the best prospects on offer.

Indeed, a glistening Caravaggio colt presented as lot 143 registered the top price of the day at 240,000gns. A half-brother to Group 2-placed Wall Of Fire (Ire) (Canford Cliffs {Ire}) out of a daughter of G2 Cherry Hinton S. winner Jewel In The Sand (Ire) (Bluebird), he was bought in this ring for 155,000gns as a foal but that punt did not initially pay off when he was retained for 130,000gns at the October Sale. Patience was rewarded this time, however, with Alastair Donald identifying him to meet a pretty intriguing brief for this type of sale.

“He'll be going into pre-training here but has been bought for a new client to race in Hong Kong,” the agent explained. “He's a lovely big horse with a nice pedigree. The sire looks like he has got a very nice 2-year-old already and I did like the yearlings, they're particularly good walkers, and this horse's movement is very good. He breezed well for a big horse. They don't start racing until they are 3-year-olds in Hong Kong, so we didn't need a 'here-and-now' horse.”

David O'Callaghan of Yeomanstown explained: “We brought him back to Book I, but it did not quite work out. He is a beautiful colt, breezed real well. He has a great attitude and hasn't missed a day.”

The other project concluded by the farm concerned lot 117, a Night Of Thunder (Ire) colt out of listed-placed Vitoria (Ire) (Exceed And Excel {Aus}) bought as a Goffs November foal for €120,000. He realized 125,000gns from Mark McStay of Avenue Bloodstock, to enter training with Hugo Palmer.

“He was my pick of the sale,” McStay said. “I am a massive fan of the stallion, ever since my time at Godolphin. I bought Storm Legend (Ire) at the breeze-ups last year [for £160,000 at the Goresbridge sale] and he was John Oxx's last winner first time out at Naas last autumn. And I remember the dam, she was pretty quick. That gave me a little bit of extra encouragement.”

But so, too, did the grounding the colt has received. “This horse comes from a great farm,” McStay stressed. “They do a super job, and he was recommended by David. He is a big, strong, mature horse, but wouldn't be one to pitch up at Royal Ascot. He'll be a horse that will take a bit more time, you'd love to see him run in the autumn. But he's an exciting horse and I'm thrilled to get him.”

A New Dream for Williams

Hometown trainer Stuart Williams had arrived with a spring in his step after saddling a daughter of Oasis Dream (GB) to win the opener up the road during the afternoon, his first ever juvenile winner on the Rowley Mile. “A slightly dubious stat, to be fair,” he protested with a smile. “Usually we can only really take them up there for the experience.”

But while he may typically lack the kind of youngsters eligible to win maidens at that level, Williams is a good deal better resourced than many other trainers in ways that are arguably more precious yet. And the shrewd eye that had picked out Desert Dreamer (GB) for just 20,000gns in Book II last October was happily able to go as high as 150,000gns for lot 96, an Aclaim (Ire) half-brother to listed winner Lady Penelope (Ire) (Night Of Thunder {Ire}).

Williams was acting for Opulence Thoroughbreds, as when active at the March Sale recently improvised here. “I'm helping them with the buying but they do have other trainers so he's not 100% certain to come to me,” he noted. “But he's a good strong horse, and athletic, and looks like he will be able to run as a 2-year-old. Unfortunately you have to pay plenty to get those.”

The colt, from the same family of Charm Spirit (Ire) (Invincible Spirit {Ire}), was picked up by consignors Tally-Ho Stud as a Goffs November foal for €95,000 and proved worth their perseverance after failing to meet his reserve at 68,000gns in Book I here last October.

One of the “touches” of the session concerned lot 133, a Dabirsim (Fr) colt picked up by consignor Robson Aguair at the Arqana sale last summer for just €22,000 despite boasting none other than All Along (Fr) as his fourth dam. Here he weighed in at 140,000gns from Richard Brown on Blandford Bloodstock, to join David Simcock.

“I bought a horse at the breeze-ups last year from Robson called Cordouan (Fr) Shalaa {Ire}),” Brown said, referring to a £105,000 purchase made at Arqana's transferred sale. “And he won very well for John Gosden at Newcastle last night. So I'm going back the same hotel: I think John's horse is very nice and I hope this one is, too. He came across the track a little bit green, but breezed very nicely and he's a good-looking horse. He'll need plenty of time, but he will get that with David. We'll give him a break now, and hopefully he'd be an August-September, seven-furlong starter.”

We revisited the evolution of Dabirsim as a breeze-up force in coverage of the opening session, when his only other representatives in this catalogue both excelled at 240,000gns (another for Aguair) and 140,000gns, respectively. He's certainly doing a precious service for the Sunday Silence line in Europe.

Another grand pinhook was completed moments later when lot 137, a Prince Of Lir (Ire) half-brother to listed winner Royal Address (Ire) (Dandy Man {Ire}) picked up by George Peckham as a £15,000 private sale at Doncaster last year, was sold for 105,000gns to the Cool Silk Partnership. This was exceptional work by the former trainer and it's good to see his talents proving viable in this sphere.

The European industry will owe a big debt to breeze-up pinhookers, in the long term, if they remain ahead of the game in importing the kind of American stock that has so often invigorated the gene pool over here. On the other hand, the sale-topping Practical Joke filly who had dominated the opening session was purchased for immediate repatriation, and that is also understood to be the probable strategy with the Union Rags colt who raised 185,000gns from Sheikh Abdullah Almalek Alsabah as lot 145.

He's certainly bred to excel on dirt, as a son of GI Alabama S. winner Careless Jewel (Tapit) from the family of the brilliant City Of Light (Quality Road). He was bought for $115,000 by P.B. Bloodstock for Tom Whitehead of Powerstown Stud at Keeneland last September, on the same trip where he found a son of Practical Joke at Fasig-Tipton for $75,000.

Offered here as lot 90, that colt gave the Ashford sire yet another hit when making 140,000gns from Irish trainer Michael O'Callaghan. It will be good to see whether the Into Mischief line can transfer its brilliance to the European theatre.

“These are both nice horses and I am very pleased,” Whitehead said. “The Union Rags will be a lovely horse later in the year. It was touch-and-go whether we'd get to the U.S. last year, but the sales company was very good and organised it all. That has been a great start, but we are only halfway there! We have another seven or eight to sell.”