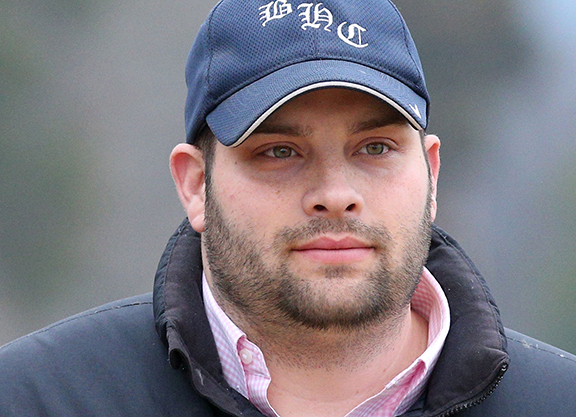 Following a tweet from Rockingham Ranch owner Gary Hartunian that he was sending the horses he had with Jorge Navarro to trainer Brad Cox, Cox told the TDN that he would not be accepting the horses.

“It's not true,” Cox said of Hartunians's tweet. “After everything that has been going on the last day and a half, I don't feel comfortable accepting any of the horses that are involved in this situation.”

Cox's statement came after Hartunian tweeted the following Tuesday morning: “All of my horses with Jorge are being picked up at Palm Meadows today and will be sent to trainer Brad Cox. That includes Jalen Journey (With Distinction), Norma's Love (Street Boss) and Red Bottom Rebel (Chitu)”

Cox said that he would be accepting horses that are owned by Mike Dubb and were trained by Jason Servis. He also said he would be keeping two horses for Rockingham Ranch that he had already been training.

“I do have two horses in training for Rockingham Ranch that I've had for six months,” he said. “I don't feel comfortable accepting any more from them at this time.”

Rockingham Ranch is among the more prominent owners that employed Navarro and was a co-owner of X Y Jet (Kantharos). In the indictments issued Monday, the District Attorney for the Southern District of New York in Manhattan went into great detail to outline the doping regimen that was given to that horse. In January, Navarro reported that Group 1 winner X Y Jet had died of a heart attack.

Rockingham Ranch is also the co-owner of Nanoosh (Paynter). In the indictment, it was reported that Navarro held a conference call with a stable in California in which “one of the operators” questioned whether or not Navarro was “giving them all the (expletive)” and also asked whether or not Nanoosh was “jacked out.” The name of the owner was not revealed.

The TDN has reached out to Hartunian for clarification, but he has not returned repeated phone calls.

David Bernsen, who bought a small share in X Y Jet toward the end of his career, said he was definitely not the owner on the intercepted phone call and that he owned 10% of Nanoosh. The third owner was the East coast-based Zayat Stables.

“I am a big proponent on cracking down on all this stuff,” Bernsen said. “I think what has happened will turn out to be good for horse racing. I just hope they figure out whatever it is that these guys are doing. It should not be this hard. They need to crack down and stop this stuff.”

Owner Brian Trump revealed on Twitter that plans have been made for two horses he had with Navarro. He wrote that Amalfi Queen (Tapit) has been retired and that Ripper Magoo (Sky Mesa) has been sent to Cox.

The Daily Racing Form reported that owner Ron Lombardi or Mr. Amore Stable is moving the six horses he had with Servis to trainer Kelly Breen. The list includes Firenze Fire (Poseidon's Warrior), a winner of five graded stakes, including the GI 2017 Champagne S.