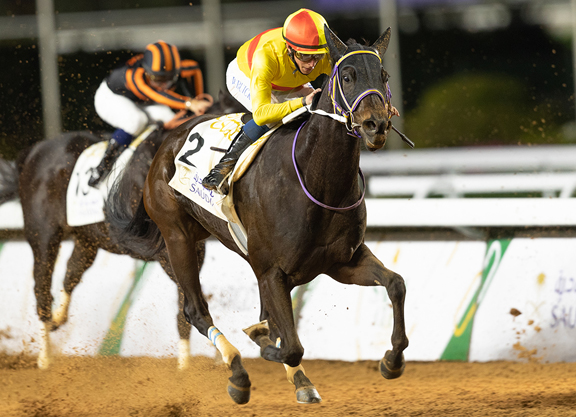 One of three Japanese raiders, Copano Kicking (Spring At Last) came with a stinging final-furlong rally in Saturday's Saudi Arabian Airlines Riyadh Dirt Sprint and was up on the wire to defeat Matera Sky (Speightstown), who dropped a similarly gut-wrenching decision to New York Central (Tapit) in the inaugural running of the event in 2020. The locally based Faz Zae (KSA) (Mizzen Mast) finished best of the rest.

The fleet-footed Matera Sky jumped straight into the bridle from gate one and led along the inside, as recent Listed Dubawi S. hero Switzerland (Speightstown) settled on his back, with Copano Kicking worse than centerfield and out into the track after breaking from a high draw. Matera Sky still led narrowly as they neared the straight, but Switzerland was bearing down and looking every bit a winning chance. Matera Sky was clinging on gamely at the 400-metre mark and beat off Switzerland, as Copano Kicking was steered off heels and into the clear, with plenty of ground to make up. As he did in 2020, Matera Sky carried what appeared to be an unassailable advantage into the final sixteenth of a mile, but William Buick kept after Copano Kicking and shoved him across the line first. Faz Zae got his nose down ahead of Switzerland for third.

A three-time winner at group level in Japan, Copano Kicking was looking for his first victory since successfully defending his title in the G3 Capella S. in late 2019 and was a latest sixth–with Matera Sky second–in the vaulable JBC Sprint at Ohi Racecourse Nov. 3. Connections indicated that they are likely to press on to the G1 Dubai Golden Shaheen at Meydan Mar. 27.

Bought back on a bid of $19,000 as a Keeneland September yearling in 2016, Copano Kicking was accepted into the 2017 Fasig-Tipton Florida Sale, where he was purchased for $100,000. He was consigned by James and Torie Gladwell's Top Line Sales, who also prepared New York Central for the 2016 Fasig-Tipton Saratoga sale. Celadon is the dam of an unnamed 3-year-old colt by Phoenix Tower. Click here for additional background on Copano Kicking.