Copano Kicking A Star on the Rise in Japan 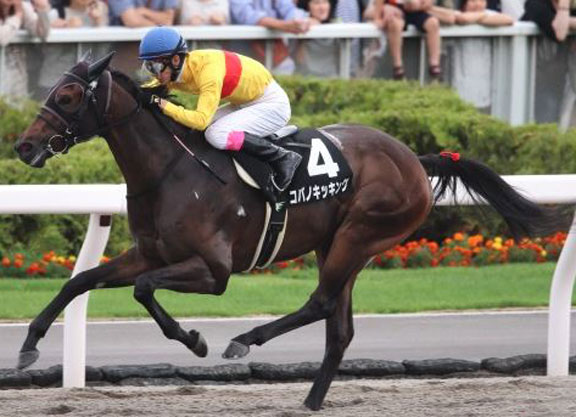 A horse that 'bounced all over like an orangutan' and 'refused to show' at the 2016 Keeneland September sale has become one of Japan's top dirt sprinter/milers, and Group 1 competition–both at home and potentially in the desert–beckons over the coming months for Sachiaki Kobayashi's Copano Kicking (Spring At Last). The 4-year-old gelding made it seven wins from nine starts and consecutive victories at Group 3 level in the Negishi S. (1400m) at Tokyo Racecourse Jan. 27 (see below, gate 11).

The dark bay was bred in Kentucky by Reiley McDonald from Celadon, a three-time winner in six appearances who was her sire Gold Halo (Jpn) (Sunday Silence)'s only foal to race in the United States. The colt was catalogued as hip 3210, deep into the 10th session of the September sale, and Top Line Sales's Torie Gladwell found herself at the Eaton consignment in search of pinhooking prospects, though at first it may have been difficult to believe that what she saw in front of her might turn into something special.

“This colt came out and he just did not want to show,” she explained. “He was bouncing all over like an orangutan and he refused to walk, but you could just tell that he was a real athlete. I left him on my list and then my husband [Top Line's Jimbo Gladwell] and I went back to look at him and the same thing–the horse just would not calm down and show.

“Reiley ended up buying the horse back (on a bid of $19,000),” she continued. “When we approached Reiley about purchasing the horse, he said he would actually send the horse to us on a half-deal, so he stayed in and partnered on the colt and we took him and trained him for no bills.”

Gladwell said that it really wasn't all that hard to see through the colt's mischievous and petulant ways and she had faith that he could become a profitable commodity during the following year's under-tack sales.

“He just looked really precocious, it looked like he was very well put-together and super athletic,” she said. “He was rearing and bucking and playing. He really caught our attention because he was so athletic on the end of the shank. He acted like he was going to do it and do it eagerly. He was not a laid-back sort of horse. He had a big hip, a really good gaskin, good forearm and you didn't have question whether he was going to go out there and give it his all every time. You could tell by looking at him at the yearling sales that he was a feel-good horse and he was going to try hard any time you turned his head loose.”

But those qualities did not mean that raising him was straight-forward. In fact, it was anything but.

“All we had to do was keep him in one piece, but that wasn't even easy,” she said. “He jumped out of the paddock twice, so we had to quit turning him out. We like to turn all of our 2-year-olds out. We think it helps lay down bone and we think it helps them mentally and this guy needed to go out, as hot-minded as he was. After the second time, the crew showed up and called Jimbo at six in the morning and they're like, 'Spring At Last is gone! He's gone! We can't find him! He's nowhere!' He ended up down at another person's barn talking to the fillies over the fence. But not a scratch on him, didn't get hurt. After that, we decided we weren't going to be able to turn him out.”

How, then, do you train such an animal?

“He got to go out in the round pen and we would lunge him before we rode him every day,” she reported. “We would warm him up a little longer than the normal horse, but even though we did all this, he'd still want to go up there and train too hard and too fast every day. Any time you turned him loose to breeze him, he would go balls to the wall. Finally we had to stop breezing him because if you wanted him to go an eighth, he'd go three-eighths. Want a quarter? He'd breeze a half.”

On pedigree, the colt was not a slam dunk for a boutique breeze-up sale like Fasig-Tipton Gulfstream, but he was accepted all the same.

“Physically, the horse was a 10 on the end of the shank,” Gladwell said. “He was beautiful, had a good smooth walk, all the right lines. Just a really early 2-year-old type, so that's why we went to Gulfstream with him.”

Consigned by Top Line, the colt did them proud with a powerful breeze clocked in :10 flat. It was one of five works to share the bullet.

“If he wasn't a bullet worker, we were going to be sorely disappointed,” Gladwell admitted.

Kobayashi signed the ticket on hip 35 at $100,000, right on the reserve set by the Gladwells and McDonald.

“Reiley had already made his mind up that if he didn't bring $100,000, we were going to race him. We were very high on the colt,” she reported. “He had a couple of issues after the under-tack show that probably held him back from bringing a lot of money, because he was very popular. He was vetted a handful of times after that breeze and the vet issues scared some people. But the Japanese looked at him and fell in love.”

Copano Kicking's victory in the Negishi S. paves the way for a start in the G1 February S. at Tokyo Feb. 17, a race won by the Kobayashi-owned champion dirt horse Copano Rickey (Jpn) (Gold Allure {Jpn}) in 2014 and 2015. It will mark Copano Kicking's first attempt at a mile, but a good performance could lead to an appearance in the G1 Dubai Golden Shaheen (1200m) at Meydan Mar. 30.

“We've never had another horse like him,” Gladwell said. “We've been doing this for 10 years, we've had maybe only three like him. It's neat when you get horses like that to come in and you know the minute you start training them that you've got one that could be really talented.”

The Gladwells have their passports at the ready.

“I'd love for him to run in Dubai, we'd love to go over there and cheer him on,” she admits.