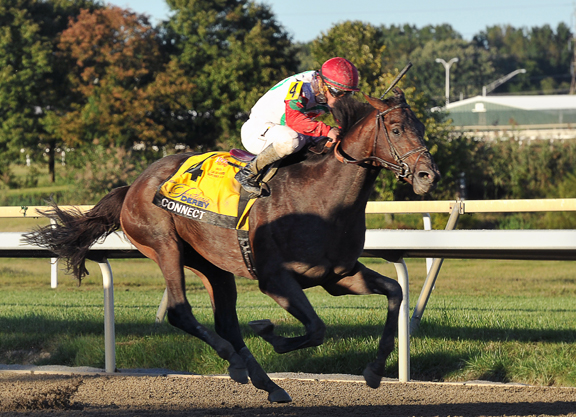 Lane's End's Grade I-winning millionaire sire Connect is just weeks from seeing his first yearlings enter the sales ring. The son of top sire Curlin was recognized for his commercial appeal with his weanlings last year, and the farm hopes to emulate that success again this fall.

“Connect was well supported last fall with his first crop of weanlings averaging nearly four times his stud fee,” said Allaire Ryan, Lane's End's Sales Director. “He seems to be passing on that Classic look to his progeny. They stand over a nice amount of ground, they're well-balanced in their hip and shoulder, and they have a great range of motion in the way they move.”

A colt out of the stakes-winning Unbridled's Song mare Wild Hoots who is half-brother to the Grade I-placed stakes winner Savings Account (Medaglia d'Oro) brought $250,000 at the Keeneland November Sale. Purchased by Renee Dailey, the colt was the highest-priced weanling in Book 3. He is now one of 11 Connect yearlings entered in the Fasig-Tipton Selected Yearling Showcase, selling Sept. 10 as hip 451.

A total of 68 Connect yearlings are cataloged for the Keeneland September Sale, including hip 649, a half-sister to Grade I winner and this year's GII Stephen Foster winner Tom's d'Etat (Smart Strike). Hip 139, a colt out of Diva Style (Unbridled's Song), hails from the family of GI Runhappy Travers S. hero and Triple Crown hopeful Tiz the Law (Constitution).

Connect attracted a debut book of 163 mares followed by another 112 in his second year. Ryan said that Connect's racetrack resume was a key factor in catching the eye of breeders.

“Connect was a very talented 3-year-old on the track,” she said. “He was on the board in seven of his eight starts, six of those being wins. Four of those, he posted triple-digit Beyer figures. He was well known for being a top miler and showing speed at that distance.”

Contitioned by Chad Brown, the $150,000 yearling purchase went undefeated in his first three starts as a sophomore, claiming the Curlin S. at Saratoga over eventual Grade I winner Gift Box (Twirling Candy). 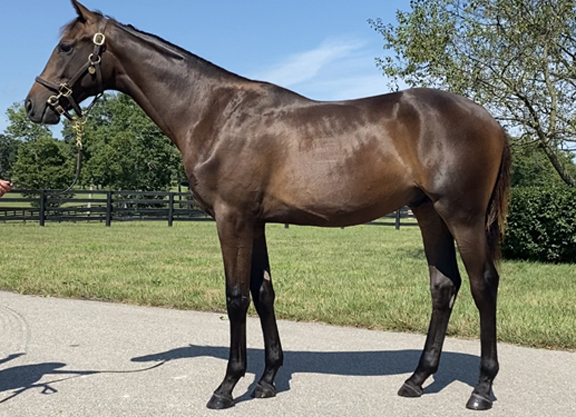 Connect colt out of Proper Mad

Later that year, he took the GII Pennsylvania Derby in a field that included Gun Runner, Nyquist, and Exaggerator. He then scored two straight career-high 106 Beyer speed figures in the GI Cigar Mile H. followed by the GIII Westchester S. the next year as a 4-year-old.

The millionaire is one of two sons of Curlin in Kentucky, along with Calumet's Keen Ice, with first-crop yearlings this fall.

“Connect was a great addition to our stallion roster simply by being a son of Curlin,” Ryan said. “He's a superstar sire with some of the world's leading racehorses. Connect is a very handsome version of his sire. He's got great leg, depth of frame and scope, and a great head and eye as well.”

Ryan said that this eye-catching physical has passed on to his yearlings. A son of Connect out of Proper Mad (Bernardini) will sell out of the Lane's End consignment at the Keeneland September Sale as Hip 1519. 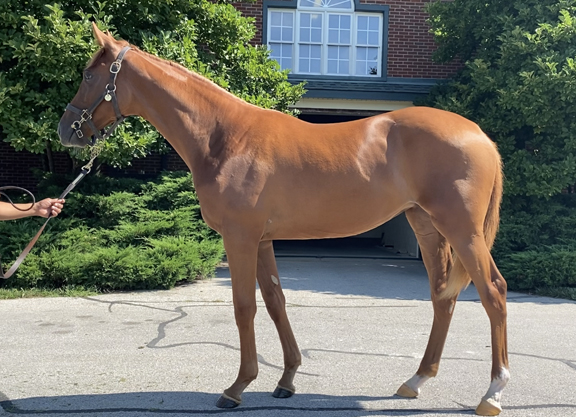 Connect filly out of Perfection Lady

“Physically, this colt is an example of what we see a lot of in the Connect yearlings. He has the leg and the scope, a nice length of neck and that Classic-looking frame. He comes from the direct family of Grade I winner Dunbar Road (Quality Road). She was at the top of her class last year, and has another graded stakes win this year in the GII Delaware H.”

Also from the Lane's End consignment, a filly out of Perfection Lady (Majesticperfection) sells as Hip 2302 at Keeneland.

“I think the part that draws me in the most about this filly is her walk,” Ryan said. “She's got a big, ground-covering stride. She's light on her feet and has that athleticism that a lot of the Connects are showing. From a physical standpoint, I think the Connect yearlings will be very well received at the sale. He's putting a bit of style into his physicals which I think has a lot of appeal to buyers.”