Classic Empire Staves Off Not This Time in Juvenile 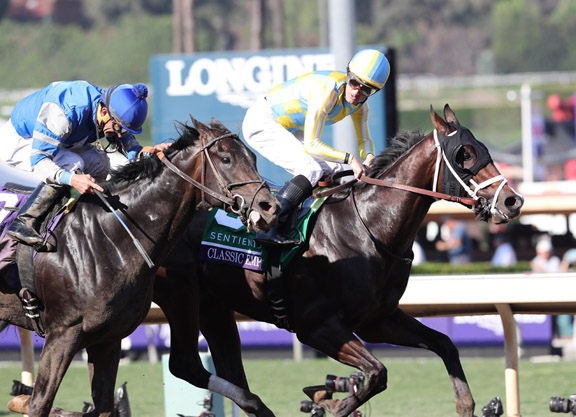 Classic Empire (Pioneerof the Nile), who dropped his jockey when he wheeled at the start of Saratoga's GI Hopeful S. two back Sept. 5, was on his best behavior again Saturday as he pressed a hot pace and hung tough to deny highly regarded Not This Time (Giant's Causeway) in a renewal of the GI Breeders' Cup Juvenile that had the feel of a potential Triple Crown key race.

A three-length winner of the GI Claiborne Breeders' Futurity S. at Keeneland last out Oct. 8, the 9-2 second choice behind GIII Iroquois S. hero Not This Time jumped from the blocks emerged from a first turn scramble to press fleet-footed Syndergaard (Majesticperfection) from the two path. Prompting a solid opening split of :23.05, he was given a shake of the reins midway down the backside to keep up the pressure and avoid getting trapped in behind a three-deep Three Rules (Gone Astray). Classic Empire moved to even terms with the pacesetter after a :46.60 half, and Not This Time inched closer while saving ground turning for home. He quickly opened a couple of lengths of daylight hitting the quarter pole, but Not This Time continued to gain on him to midstretch. The latter looked like he might very well go by inside the sixteenth pole, but Classic Empire dug deep to prevail by a neck with a large gap back to GI Champagne S. hero Practical Joke (Into Mischief) in third.

“This is unbelievable,” beamed owner John Oxley, whose 2001 GI Kentucky Derby winner Monarchos died last month. “It's what we've been hoping for for many years now, a horse that might replace Monarchos, whom we just lost. This horse is exceptional. I love him, but even more importantly, the jockey, Julien Leparoux, what a ride. Fantastic. Just perfect. It was flawless, and the team behind him, [trainer] Mark Casse, [son] Norman Casse, the entire organization works for each other. Also, to my sweet wife, Debbie, she brings luck to the team.”

A debut winner after a slow start when sprinting in the Churchill slop May 4, Classic Empire again rallied from far back after a rough beginning to get up in that venue's GIII Bashford Manor S. July 2. His problems from the gate got even worse in the Hopeful, but he remained up in Saratoga with Norman Casse after that meet had concluded, and had reportedly figured it all out with the addition of blinkers. Those positive reports were backed up with his convincing three-length defeat of Lookin At Lee (Lookin At Lucky) down in Lexington last out.

“I think you can see there is a big, big difference since the blinkers are on,” said Leparoux, who didn't ride Classic Empire at the Spa. “He's way more focused. The first two starts, he was not breaking sharp from the gate. Since we put blinkers [on]… it's been a big change. He's a very, very nice horse. We go fast, but you don't feel like you go fast on him, so [we're] looking forward for next year for sure.”

Said Mark Casse of his impressions while watching the race, “At the top of the lane I was a little worried because he'd never really opened up before too much, so I'm like, 'Well, maybe. I don't know how much I want him to open up.' Then I thought, 'Well, he's going to win by a couple lengths.' And then towards about the 16th pole I may have said a bad word because I could see that horse coming. You know, we had run second with Valadorna (Curlin) in the [GI Breeders' Cup Juvenile Fillies], and she just couldn't get up. I'm like, 'Oh, now it's the opposite way.' But I'm just proud of how both of them ran today. More importantly, [Mr. Oxley] says he just comes along for the ride, but he fuels the ride… Not only is he a great owner, but both him and Debbie are great friends of ours.”

Oxley and Casse went to $475,000 for Classic Empire at last year's Keeneland September Sale, making him the third-priciest yearling last term by the sire of Triple Crown winner American Pharoah. Classic Empire's year-older half-sister Uptown Twirl (Twirling Candy) was a $630,000 OBS March grad and subsequent multiple stakes winner. Dam Sambuca Classica, a daughter of SW and MGISP In Her Glory, produced a Concord Point colt last season before aborting an Uncle Mo colt this spring. She was bred back to Candy Ride (Arg).