Oxley Finds the Fountain of Youth 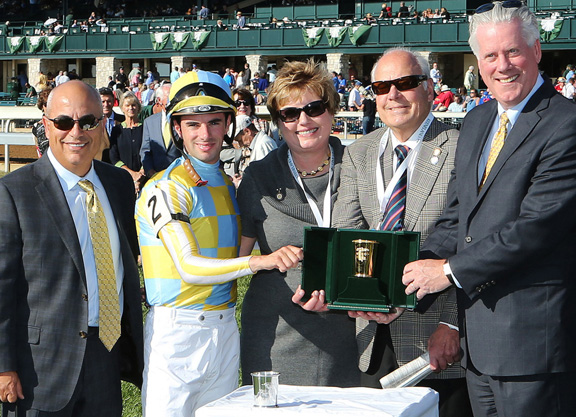 At the age of 79, John C. Oxley has pretty good reason to be “feeling 10 years younger” these days.

The longtime successful owner/breeder will have his very familiar light blue-and-gold silks carried by a formidable one-two punch in the Breeders’ Cup courtesy of highly promising juveniles Classic Empire (Pioneerof the Nile) and La Coronel (Colonel John). Both are trained by Mark Casse.

“To get excited about a young horse as one ages–it keeps you young,” Oxley commented. “It is most exciting. I do have two in there [in the Breeders’ Cup] and it appears that they’ll both be among the favorites.”

Classic Empire punched his ticket to Saturday’s GI Breeders’ Cup Juvenile with an extremely impressive showing with blinkers added while making his two-turn debut in Keeneland’s GI Claiborne Breeders’ Futurity Oct. 8. After beginning his career with a pair of wins at Churchill, including the GIII Bashford Manor S. July 2, the $475,000 KEESEP yearling purchase wheeled at the start and lost rider Irad Ortiz Jr. in the GI Hopeful S. at Saratoga Sept. 5. He is listed as a 4-1 chance on the morning-line for the Juvenile.

It doesn’t take long for Oxley to start reflecting on his late 2001 GI Kentucky Derby winner once Classic Empire’s name is brought up.

“It’s been a long time coming since Monarchos,” Oxley commented. “Classic Empire’s such a nice horse–it’s quite a thrill. I recently spoke with a friend who is an outstanding horsemen and he called Classic Empire the trifecta–he has the race record, the sire line and is most correct. And, of course, I echo the enthusiasm for him.”

The GI Breeders’ Cup Juvenile Fillies Turf-bound La Coronel has been unbeatable since switching to grass. The $37,000 FTKOCT yearling turned $375,000 OBSAPR juvenile, off the board in her first two tries on dirt, generated plenty of buzz following her sensational Saratoga maiden win on the infield Sept. 5 and followed suit as the 9-5 favorite in Lexington with a dazzling performance in the GIII JP Morgan Chase Jessamine S. Oct. 12. La Coronel, drawn widest of all in slot 14 Friday, is 9-2 on the Juvenile Fillies Turf morning-line.

“And La Coronel, the filly, golly, she’s just been really exciting in that she’s won her last two since put on the turf circling the field at Saratoga to win off, then again doing it here at Keeneland,” Oxley said. “We’re just really excited about her.”

“The Breeders’ Cup has become such an outstanding series,” Oxley said. “A two-day affair now–it’s big money, it’s Grade I status, it’s prestige, and it’s what every owner, I think, is hoping to be involved in.”

He continued, “It’s particularly exciting for me. I love the 2-year-olds because I love the involvement in bringing along one that might be a special horse at two, but also the prospect of producing an outstanding horse over his or her career. It’s the anticipation, and that’s what life is about in many ways. Especially in racing.”

Following in his father’s footsteps as a Hall of Fame Polo player, the native of Tulsa, Oklahoma quickly found a passion for the horses.

“I have to give my mother and father so much credit,” said Oxley, who made his money in the oil-and-gas business after founding Oxley Petroleum in 1962 and later selling it in 2003. “They were both horsemen. Dad had me on a horse when I was about two months old. There was an article in the paper because there was a reporter [at the farm] there that day. I was, of course, screaming–I was pretty scared, I would think, but he told the reporter, ‘I’ll have this boy riding before he’s a year old.’ And that’s kind of what happened.”

Oxley owned his first racehorse, “a successful claimer,” at the age of 35, and substantially increased his involvement in the sport after marrying his wife Debby, a native of Louisville, in 1994. With former trainer John T. Ward Jr. at the helm, the Oxleys reached the pinnacle with the aforementioned duo of Monarchos and Beautiful Pleasure as well as with 1995 GI Kentucky Oaks heroine Gal in a Ruckus (Bold Ruckus). Other standouts to race for the duo include: 2002 GI Hopeful S. winner Sky Mesa (Pulpit), 2002 GI Fountain of Youth S. winner Booklet (Notebook), and multiple graded winners Jambalaya Jazz (Dixieland Band) and Pyramid Peak (Mt. Livermore), both unplaced in the 1995 ‘Run for the Roses.’

When Ward decided to make a career change–he became executive director of the Kentucky Horse Racing Commission in 2012–Oxley began making his transition to the Casse barn.

“I have the utmost respect for Mark and enthusiasm for his program,” Oxley said of the newly minted Canadian Hall of Fame trainer. “We got off to some immediate success with Delightful Mary and she was quite exciting for me because I’d been in a little bit of a slower period for a few years. Of course, I didn’t know how our program would develop, but Mark has improved his operations each and every year.”

One year removed from his first two Breeders’ Cup tallies, what specifically stands out about Casse’s operation?

“He has outstanding personnel,” Oxley replied. “His assistant trainers are just top notch and really has first-class people at all levels. A trait I admire in anyone that is successful is, are they a good delegator? And Mark certainly is. He has the ability to pick outstanding personnel and keep them aboard and keep them happy. And like he always says, ‘It’s a team effort.’”

Oxley added with a slight chuckle, “I’m just enthused to be a part of the team.”

With earnings ranking in the top 10 among owners for the past four seasons, Oxely’s commitment to the industry remains as strong as ever. At this year’s Keeneland September Yearling Sale, he signed for no fewer than four head for a total of $2.125 million, including an $800,000 son of Tapit and a $675,000 filly by Gainesway’s leading sire. He also purchased three youngsters at the Fasig-Tipton Saratoga Select Sale for a total of $1.55 million, headed by a $650,000 son of Uncle Mo. Oxley’s 250-acre Fawn Leap Farm in Midway, Kentucky, purchased in 1999, is the home of approximately 40 of his broodmares.

“It’s just that affiliation with the Thoroughbred which started when I was a few months old,” Oxley said of his love for racing. “My wife and I both love breeding and the farm and I also like the idea that we’re supporting a lot of people in the industry in a small way in the fact that I buy a lot of horses, so obviously the money is flowing out there. I just think it’s a great industry. It’s an outlet for people that are addicted to the game like I am.”