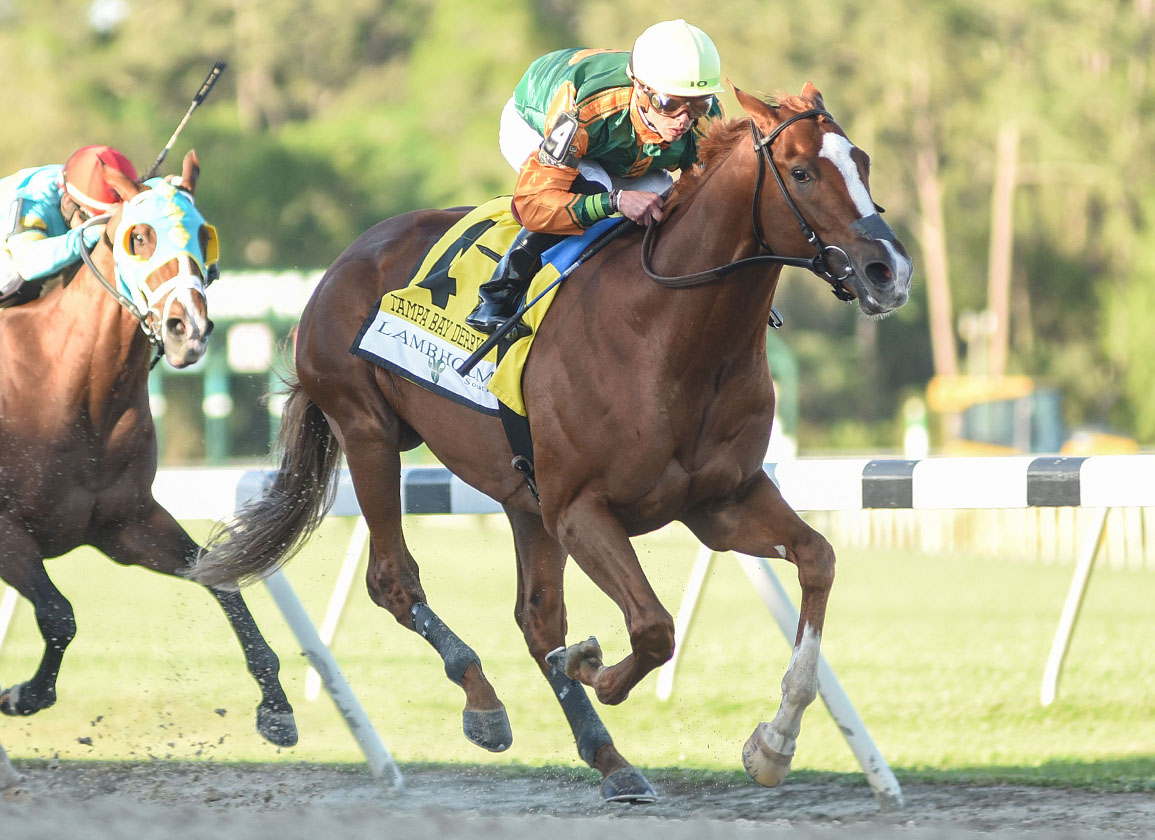 Where it comes to Kentucky West Racing LLC and Clarke M. Cooper's Classic Causeway (Giant's Causeway), mapping out race strategy is a fairly straight-forward undertaking. For the second time in as many starts as a sophomore, the handsome chestnut found the front after breaking like a shot and widened his advantage late to take the GII Lambholm South Tampa Bay Derby and secure a berth in the starting gate in the GI Kentucky Derby at Churchill Downs in eight weeks' time.

“That early speed is a great asset to have because you're going to stay out of trouble when you can break fast and clear,” winning trainer Brian Lynch commented. “When you have a horse that can run them off their feet early, get a chance to take a breather and relax and still be able to finish, that is a great asset in a horse.”

Same as he did when wiring the field in the GIII Sam F. Davis S. Feb. 5, Classic Causeway hit the ground running beneath Irad Ortiz, Jr. and galloped them along in the two and three path.

Grantham (Declaration of War), fourth in what is becoming a productive renewal of the GIII Withers S. the same afternoon, was given a more positive ride this time from gate one and argued from the rail, while Giant Game (Giant's Causeway) and Trademark (Upstart) were also part of the early mix. Davis runner-up Shipsational (Midshipman) settled in about midfield while trapped out very wide from a high draw.

The first quarter was timed in a very manageable :23.67 and the half was up in :48.17 as Classic Causeway continued to show the way, content to chart a course at least three paths off the inside over a track that took plenty of rain earlier in the day and was rated 'good' for the Derby. Shipsational was the first to try to make a race of it as he loomed up four wide under a Manny Franco drive at the five-sixteenths, but Ortiz, Jr. was saving Classic Causeway for a bit of a finish and spurted clear again, despite drifting out a touch in upper stretch. Firmly in front as they hit the final furlong, the odds-on pop held sway and was actually going away at the wire, with a final sixteenth of a mile in a modest :6.50. Grantham plugged on gamely for second on what may not have been best part of the track, just holding off a game Shipsational for third. Golden Glider (Ghostzapper) showed some late interest to be a further neck back in fourth.

“He gave me the same performance again [as in the Davis],” Ortiz, Jr. reported. “He broke good. He gave me good position and I just went from there. He was traveling perfect all the way to the 3/8-mile pole. When I asked him, he was there. Getting close to the wire, he was looking around a little bit, but I felt I had a lot more horse. He's acting like he can carry his speed more. These last couple of races he's been acting after the wire like he still has more left. I don't want to jinx it, but I think there is something more there.”

One of the more impressive juvenile winners at Saratoga last summer, Classic Causeway had to be used from the 13 hole in the GI Claiborne Breeders' Futurity and set a sharp pace before understandably retreating late to finish an excusable third. Beaten on the square by 'TDN Rising Star' Smile Happy (Runhappy) in the GII Kentucky Jockey Club S. at Churchill in late November, he set a more pressured pace in the David, but had plenty left late and went on to best Shipsational by 3 3/4 lengths.

As has been widely reported, Classic Causeway is one of three members from the final crop of his sire–all colts. Giant Game finished eighth in Saturday's race, while the final member of the crop, Shadwell's Monaadah, was an impressive debut winner in a 1400-meter turf allowance when making his career debut at Meydan Mar. 3.

Classic Causeway is the third Tampa Bay Derby winner for the 'Iron Horse', joining Carpe Diem and Destin, the latter of whom was the last to complete the Davis/Derby double.

Classic Causeway has plenty of Classic influence close up in his pedigree. Dam sire Thunder Gulch caused a 24-1 upset in the Run for the Roses in 1995, while Temperence Hill, sire of the colt's third dam, won the 1980 Belmont S. for Loblolly Stable at a robust 53-1.

One of five winners from eight to race out of the multiple stakes-winning Private World, Classic Causeway has a 2-year-old half-sister by Lookin At Lucky and a yearling half-brother by Justify. Private World is due to the Triple Crown winner for 2022.