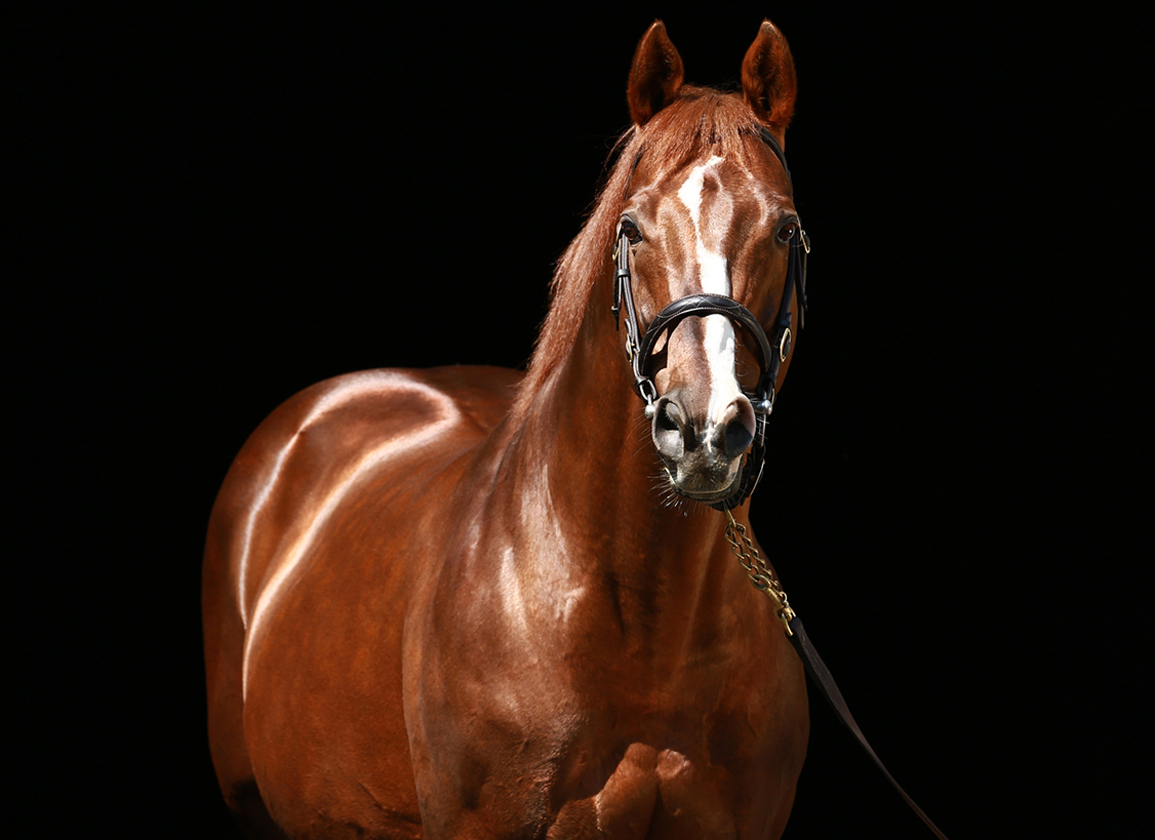 It's as though we have walked out to the very last among the thousands of volcanic rock columns that comprise the Giant's Causeway, and the sea is now lapping round our ankles. But though we probably shouldn't place undue pressure on the stone beneath our feet, it might just support a final expansion of perspective on a horse that truly measured up to his naming for a geological phenomenon.

For the scintillating debut of Classic Causeway on the main track at Saratoga a couple of weeks ago permits us to hope that a finishing flourish might yet be added to the legacy of one of the most influential stallions of the modern era.

This is one of just three named colts eked from a handful of last coverings by Giant's Causeway, who died in April 2018. (There was apparently one live daughter, too, but she does not appear to have been registered.) And his trainer Brian Lynch is optimistic that he may have the potential to bring his sire to a posthumous milestone by inching him up from his present aggregate of 99 graded stakes winners.

One step at a time: but Classic Causeway certainly dominated some fancied rivals, representing powerful operations, before cutting loose by six and a half lengths in the stretch. Lynch is proposing to test the water for the Breeders' Cup in the GI Claiborne Breeders' Futurity at Keeneland Oct. 9.

Classic Causeway was homebred by Patrick O'Keefe (of Kentucky West Racing) and Clarke M. Cooper from the Thunder Gulch mare Private World, herself a smart juvenile back in 2005.

“Old friends of mine from California bred him,” Lynch explains. “And they asked me to go and have a look at him as a yearling: if I liked him, I could go ahead and put him into training. And I did, he had some sort of presence about him: strong, lot of bone, just a real well-made colt.”

So the youngster was sent to Margaux Farm to be prepared for his track career.

In those first, tentative works at Churchill, Classic Causeway volunteered himself for service at Saratoga, where Lynch was delighted to be taking a barn again after sitting out the pandemic meet last year.

“As we got some more serious work into him, he definitely stood out as a Saratoga 2-year-old,” Lynch says. “He was one of those that just never missed a beat: never had a pimple, never left an oat. Every work you gave him, he came out a better horse than went into it. He loved going to the gate, loved breaking from the gate. He's just been a very easy, precocious horse who loves to train.

“You send him to the top of the mountain, he looks down and says: 'What's next, boss?' Where some of these 2-year-olds won't be halfway up before they're saying, 'Oh, my toe's sore,' or 'I got a kink in my tail.' He's just always been a tough, hardy horse. I always say we're not hard on them, but if they do have some run to them, we'll ask them for a bit of it along the way. And every time we've asked him, he's just taken that step up.”

The Australian-born conditioner remains mystified that so many rivals here confine their young horses to half-mile works, maybe five-eighths at a push. But as a son of such a venerable two-turn influence, and moreover out of a mare by a Belmont winner, Classic Causeway was given the chance to bed down his speed and precocity in a deeper foundation.

“I always had it mind to run him seven-eighths at Saratoga, so I got some good 1200-meter drills into him,” Lynch explains. “And you know, for a 2-year-old to be able to work in 1:12 and change, it's like when you watch the kids play footy that just have all the mechanics: they know how to kick the ball, how to pass, how to tackle. He just knew how to do everything.”

Sure enough, Classic Causeway proved far too natural a runner for his pursuers on debut.

“I was absolutely thrilled,” Lynch admits. “Those are expensive horses, at Saratoga, but he just broke and took it to them. The farther they went, the farther he was going to win by. He's come out of his race like the ultimate professional, too. So if he can run well at Keeneland next month, he'd have the GI Breeders' Cup Juvenile as a target to head for.”

Lynch is humbly aware of this colt's status as a “collector's item” and would be honored if he could carve a fresh memorial to Giant's Causeway.

“I followed his career in Europe with Aidan [O'Brien] and then to run a race like that, first time on the dirt [in the GI Breeders' Cup Classic in 2000], showed what an incredible racehorse he was,” he remarks. “That stretch duel with Tiznow have to go down there as one of the great Breeders' Cup Classics, it ranks up there with Blame and Zenyatta.”

Giant's Causeway left a number of potential heirs at stud but none, so far, can challenge Shamardal, actually a member of his very first crop. Though he, too, has departed since the loss of the patriarch, Shamardal gave the male line a robust presence in Europe, notably through the rise of Lope De Vega (Ire) at Ballylinch in Ireland.

True to his own versatility, however, Giant's Causeway was also a historic achiever in North America, only overtaken this summer by Tapit for the all-time progeny earnings record. He is, moreover, proving as important a broodmare sire as always seemed likely in a son of Storm Cat and a Rahy mare, with freshman sensation Gun Runner already promising dramatic enhancement to this dimension of “the Iron Horse”.

That soubriquet reminds us how very wholesome an influence we're celebrating here. Hopefully, then, Giant's Causeway will draw out some similarly ferrous elements in the pedigree of Classic Causeway, which combines some considerable contrasts in terms of soundness.

His dam Private World won her first three (including two stakes) before tailing off in the GI Starlet S. and then managing only a couple of sophomore starts. Kentucky West had bred her from an Arkansas-bred mare named Rita Rucker, by a forgotten son of Danzig, Dmitri, who himself made only one start. Rita Rucker, in contrast, won no fewer than 21 of 72, albeit at a very modest level. Mated with Point Given–a son, of course, of Private World's sire Thunder Gulch–Rita Rucker produced a colt named Point Encounter, whose solitary start at Santa Anita was so impressive that he, like Dmitri, was given a chance at stud. (Private World, incidentally, has remained a regular client at Ashford since the loss of Giant's Causeway, resulting in a yearling filly by Lookin At Lucky and a weanling colt by Justify.)

As for Giant's Causeway, his two other parting shots both have auspicious antecedents. Giant Game, bred by H. Allen Poindexter out of graded-stakes producer Game For More (More Than Ready), realized $500,000 from a very shrewd partnership, between Albaugh Family Stables and West Point Thoroughbreds, at Fasig-Tipton last year. His debut for Dale Romans at Churchill last Saturday had been preceded by some very brisk works and he shaped extremely well in rallying for third after a green break.

The other Giant's Causeway colt, Shadwell homebred Monaadah, is in training with Saeed bin Suroor in England. But the one who's up and running is Classic Causeway. Morale is high in the Lynch barn, following three wins at the lucrative Kentucky Downs meet, and $17,000 weanling Red Danger (Orb) will also be given a chance to target the Breeders' Cup after following up his own Saratoga maiden success in the $500,000 Global Tote Juvenile Sprint S. And, having launched multiple graded stakes winner Giant Gizmo while working for the Stronach family's Woodbine division, Lynch certainly valued the compliment when someone remarked how much of their sire could be seen in Classic Causeway.

“And he does possess a lot of his father in him,” he agrees. “When I think of how gutsy Giant's Causeway was, coming down the lane with Tiznow, I just hope we can keep this one healthy and sound. Because he's potentially a very nice horse in the making.”