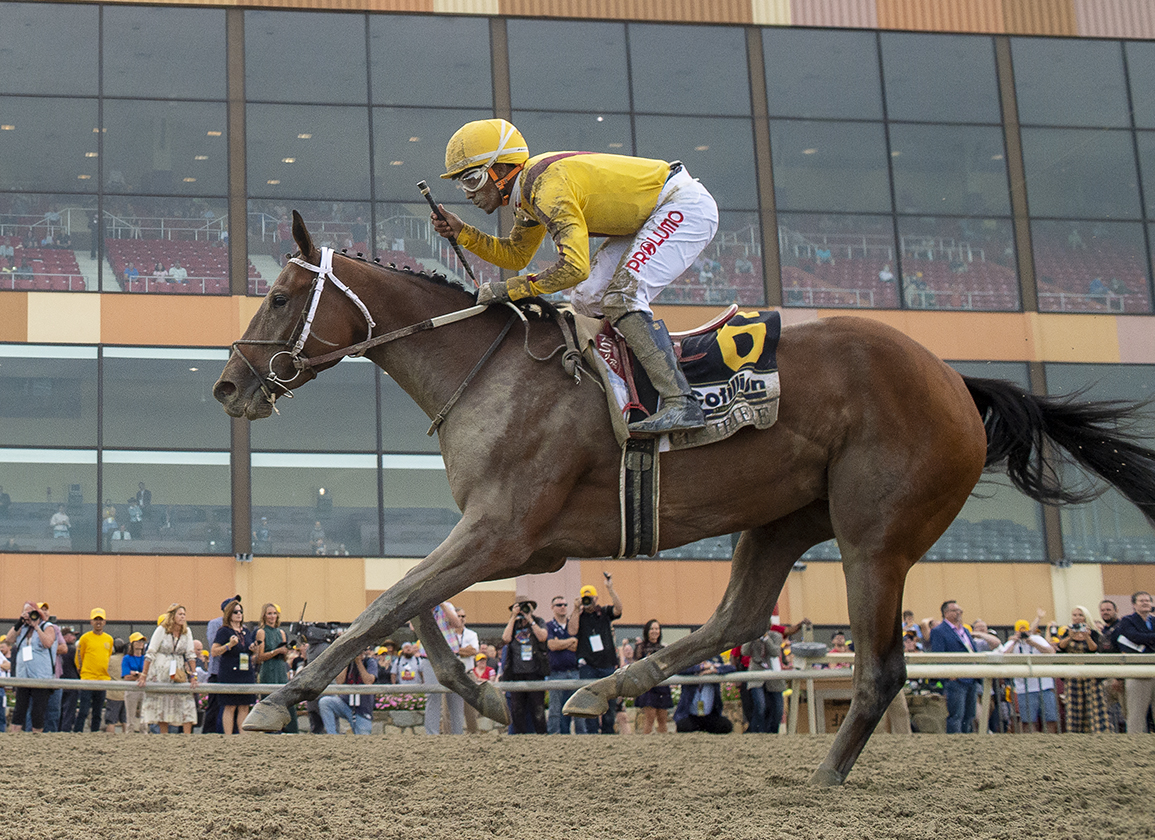 Stonestreet homebred Clairiere (Curlin) kicked home convincingly in Saturday's GI Cotillion S. at Parx to earn a first highest-level victory and snap a five-race winless streak while capping an exacta for her sire. A neck winner of the GII Rachel Alexandra S. in February, the Steve Asmussen pupil was second best to familiar foe Travel Column (Frosted) in the GII Fair Grounds Oaks a month later. She was fourth behind fellow Stonestreet product Malathaat (Curlin) in the GI Kentucky Oaks Apr. 30, third in the GII Mother Goose S. at Belmont June 26 and filled out another trifecta when Maracuja (Honor Code) upended Malathaat in the GI Coaching Club American Oaks at Saratoga July 24. Clairiere was shortening up from a second-place run behind Malathaat in the 10-panel GI Alabama S. back at the Spa Aug. 21, and was the lukewarm 5-2 favorite to provide Hall of Famer Steve Asmussen with a record fourth Cotillion trophy.

Breaking inward a bit at the start, Clairiere quickly recovered but was forced to tap on the brakes around the first turn before finally settling in third last and out in the clear. Main market rival Always Carina (Malibu Moon), meanwhile, showed the way through easy splits of :24.92 and :49.67 as Obligatory applied token pressure. Clairiere began to pick off foes rapidly heading around the final bend, and powered to the fore in midstretch to prove clearly best.

“I can't tell you how much it means for Clairiere and Stonestreet and that family that she comes from,” said Asmussen. “She was carrying along nicely within herself within striking range. She's kept herself in great company all year and getting good when it matters most. Obviously, we're going to speak to Stonestreet and stuff [with regards to a start in the GI Breeders' Cup Distaff], with the numbers she's got she's consistently getting faster at the right time.”

Clairiere is the 16th Grade I winner for her two-time Horse of the Year sire, who stands at Hill 'n' Dale at Xalapa. She is also the second bred on the cross of Curlin over Bernardini after GI Coaching Club American Oaks victress Paris Lights. The GI Preakness S. winner also has an additional six Grade I winners out of daughters of sons or grandsons of Seattle Slew. The late Bernardini is rapidly making a name for himself as a broodmare sire, and the GI Cotillion S. star is his 12th Grade I winner in that role.

Cavorting, a daughter of GII Molly Pitcher Breeders' Cup H. heroine Promenade Girl (Carson City), was barren to Quality Road for this year, but was bred back to Into Mischief this spring. She is also a half-sister to GII Penn Mile S. winner Moon Colony (Uncle Mo), while in the extended family is GI Californian S. scorer Another Review (Buckaroo), GI Santa Barbara H. winner No Review (Nodouble) and MGSW Dance Colony (Pleasant Colony), runner-up in the GI Gazelle H.