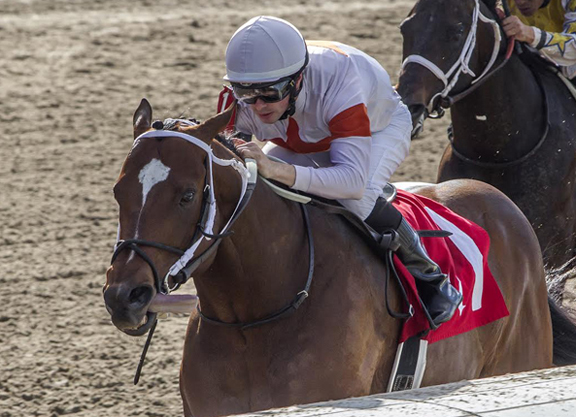 Grade III winner and promising young sire Cinco Charlie (Indian Charlie–Ten Halos, by Marquetry) has been purchased by Bob & Tyree Wolesensky's Leadem Farm and will relocate there for the 2022 breeding season after spending his first five seasons at Spendthrift Farm. Jay Goodwin orchestrated the deal.

“Texas racing is thriving and the breeding business is coming back,” said Goodwin. “Bob and Tyree approached me about finding a stallion that would fit Texas and I don't think we could have found a better one. Cinco Charlie was a brilliantly fast 2-year-old who won the Bashford Manor, was owned by Bill & Corinne Heiligbrodt and trained by Steve Asmussen, Texas Hall of Famers. This horse is Texas through and through. Cinco Charlie had the speed and precocity that Texas breeders want. Leadem Farm is an absolutely beautiful operation in the heart of Texas horse country and I'm sure that Cinco Charlie will have a long and successful career there. I want to thank Spendthrift Farm, particularly Eric Gustavson, Ned Toffey, Mark Toothaker and Bill Heiligbrodt for helping this transaction take place.”

Cinco Charlie won eight of his 18 career starts, for earnings of $608,920 with seven total stakes wins. He currently sits in the top 30 on the second-crop sire list and his top runners include the stakes-winning colt Huntsinger as well as Five Pics Please, who was second in the GIII Sweet Life S. at Santa Anita earlier this year. Cinco Charlie's second crop includes the stakes-placed Serape and the impressive recent maiden winner Saint Charles.