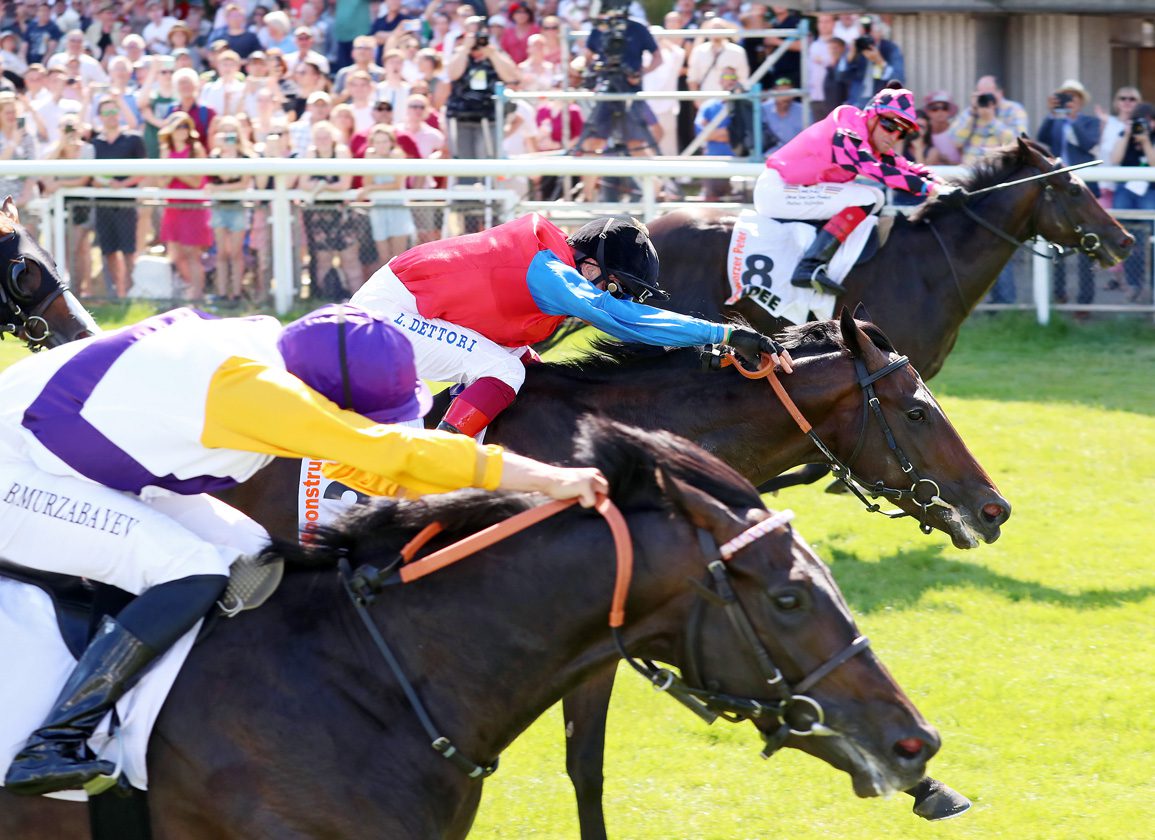 Hamburg's new starting stalls, wider than before, were the reason for a near 30-minute delay to Sunday's G1 IDEE 153rd Deutsches Derby and course technicians worked furiously on making necessary adjustments to the running rail so that they would fit the track. In the €650,000 contest itself, it was a matter of millimetres at the finish too as Gestut Park Wiedingen's G2 Union-Rennen victor Sammarco (Ire) (Camelot {GB) denied the Markus Klug-trained duo Schwarzer Peter (Ger) (Neatico {Ger}) and So Moonstruck (Ger) (Sea The Moon {Ger}) in a thrilling conclusion to Germany's seasonal highlight.

Sammarco opened up with a neck defeat of subsequent sales-race scorer Alaska Tiger (Ire) (Maxios {GB}) when graduating over 7 1/2 furlongs in his Oct. 31 debut at Halle, his lone juvenile start, and returned to run second behind the reopposing Lavello (Ire) (Zarak {Fr}) in Munich's 10-furlong May 1 G3 Bavarian Classic on seasonal debut. He lined up for this date with destiny coming back off a narrow defeat of So Moonstruck upped to 11 furlongs in Cologne's June 6 G2 Union-Rennen, Germany's premier trial for this race, and was sharp from the two box to race third going by the judge first time. Comfortable there until shuffled back when caught in a pocket off the home turn, the 63-10 chance made rapid headway once in the clear to launch his bid passing the furlong marker and was driven out to prevail in a blanket finish. The winning margins were a short head and the same back to Schwarzer Peter and So Moonstruck.

“I am overwhelmed and can hardly speak at the moment,” said rider Bauyrzhan Murzabayev after claiming a first success in the contest. “I am so proud of this horse. We had the perfect race, right from the start, although the pace could have been a bit stronger. I have to be very thankful that Jozef Bojko [aboard Maraseem] allowed some room soon after entering the straight. That helped enormously as I was able to find a free passage on the inside.”

Contributing to a list of notable firsts, Gestut Park Wiedingen's Baron Helmut von Finck added, “We have been a breeding operation for 35 years now and this is a lifetime dream come true. It is absolutely awesome.”

Trainer Peter Schiergen took his tally in the feature to six and said, “Everything went smoothly and exactly as we had planned. Bauyrzhan gave Sammarco a great ride and really earned his first Group 1 and Derby victory. It was only Sammarco's fourth start, he has won two Group races now and was Group-placed before. I am quite positive that he is a true Group 1 horse in the making.”