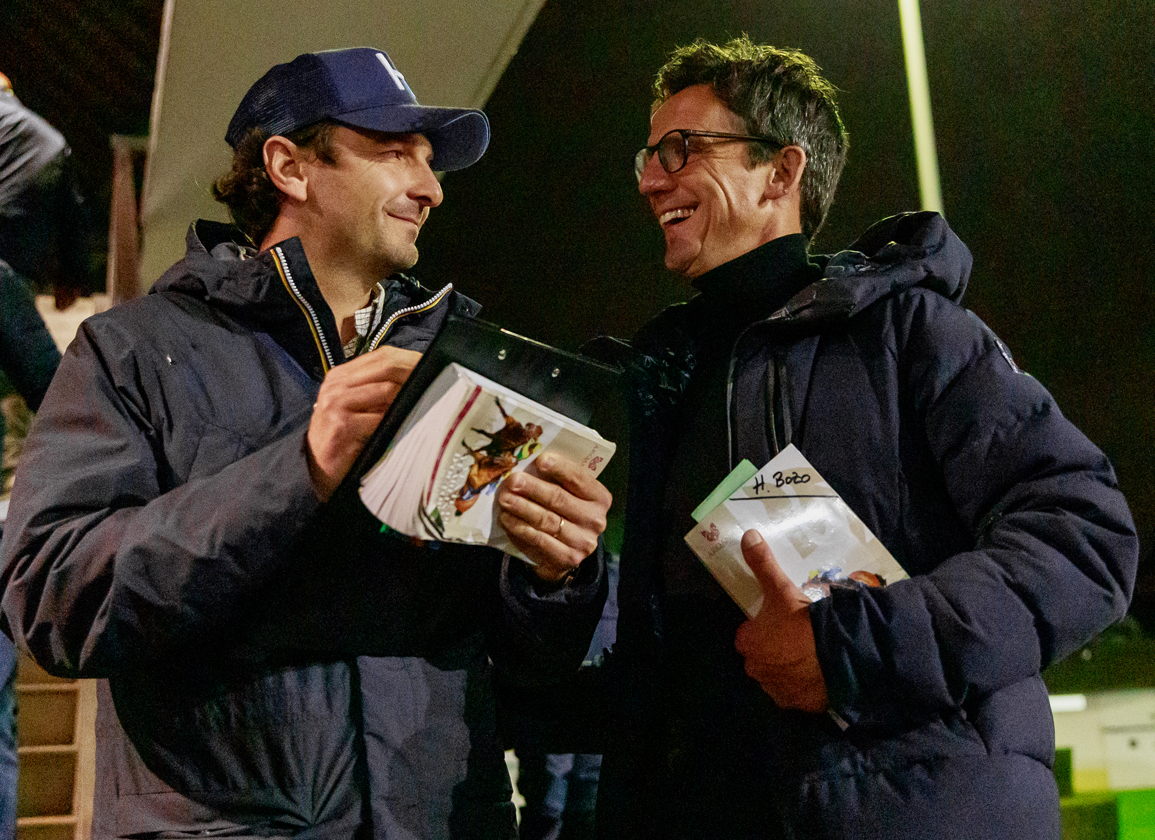 As has been seen throughout the European yearling season so far, there was a buoyant level of trade in Deauville on Monday, with figures exceeding the pre-pandemic returns of 2019.

For much of the day colts by Siyouni (Fr) and Wootton Bassett (GB) had shared top billing, with each being sold for €420,000, to Coolmore and Anthony Stroud, respectively.

Wootton Bassett may no longer stand in France but his burgeoning reputation ensured that he played a significant role during the first session at Arqana. Anthony Stroud and Matt Coleman signed for four of his yearlings, including the day's co-second-top lot (lot 49). Though that colt out of the Frankel (GB) half-sister to Charm Spirit (Ire), bought for €420,000 from Ecurie des Monceaux, was for an undisclosed client, two of the quartet were bought for Alison Swinburn, who has enjoyed noted success with the stallion through Audarya (Fr). The G1 Prix Jean Romanet and GI Breeders' Cup Filly & Mare Turf winner was bought from this sale for €125,000 back in 2017.

After signing for lot 14, a daughter of the Group 3-placed Harem Lady (Fr) (Teofilo {Ire}) at €210,000 from Haras d'Etreham, Stroud said, “She's been bought for the same connections as Audarya and will go into training with James Fanshawe. She's a lovely, athletic filly.”

That purchase was backed up a little later by the acquisition of lot 45 from La Motteraye Consignment. Knocked down at €270,000, the colt is the first foal of the dual winner Lolldaiga (Ire), who is also by Teofilo and is a granddaughter of the G3 Prix de Flore winner Louve (Irish River {Fr}).

With 14 yearlings sold during the first session, Wootton Bassett's average for the sale stood at €200,857.

Al Shaqab Racing were also among the buyers of Wootton Bassett's stock, with the team going to €220,000 to secure lot 80 through Nicolas de Watrigant. Another from the Monceaux draft, the filly is a daughter of the South African Grade 3 winner and Grade 1 runner-up Olma (SAf) (Dynasty SAf), herself a granddaughter of the G1 Fillies' Mile victrix Teggiano (Ire) (Mujtahid).

After going to €320,000 for the full-brother to listed winner Sivoliere (Fr) (lot 117) from the Etreham draft, Al Shaqab's Paul Hensey said, “He was our pick of the catalogue today. Obviously Sea The Stars is going from strength to strength and he's bred on the same cross as Zelzal, which was of interest to us. He will be trained by Stephane Wattel.”

Al Shaqab also formed a partnership with Etreham to buy the Haras de Fresneaux-bred colt by Almanzor (Fr), whose dam Rapid Transaction (A P Indy) is a granddaughter of the GI Kentucky Oaks winner and stellar producer Blush With Pride (Blushing Groom). Offered as lot 98 through Haras des Capucines, the half-brother to black-type earners Fastidious (Fr) and Central Park West (Fr) was bought for €180,000.

Coolmore's support for Siyouni (Fr) yearlings has been strong this season in particular, but that's hardly a surprise given that it recruited Arc winner Sottsass (Fr) to the stallion yard in Fethard for the 2021 season and has already welcomed this season's outstanding 3-year-old St Mark's Basilica (Fr) ahead of next season. Those two stallions are both out of daughters of Galileo (Ire) but Monday's acquisition (lot 67) is a son of the listed-winning Montjeu (Ire) mare Modern Eagle (Ger).

Strong competition for the half-brother to the listed-placed Masterpiece (Fr) (Mastercraftsman {Ire}) took agent Laurent Benoit to €420,000 and he later confirmed that he had been bought for the Coolmore partners.

Those partners sometimes include Peter Brant of White Birch Farm, who in his own right went to €350,000 for a filly by young Coolmore stallion Churchill (Ire). Michel Zerolo of Oceanic Bloodstock did the bidding on his behalf for lot 119, the half-sister to G1 Grand Prix de Paris winner Shakeel (Ire) (Dalakhani {Ire}), who was bred and sold by Haras de Montaigu.

“She'll be trained here in Deauville by Jean-Claude Rouget,” said the agent.

Zerolo and Brant also struck late in the day for lot 201, another of the colts to have contributed to a good day for Wootton Bassett. The grandson of the G1 Nassau S. winner Winsili (GB) (Dansili {GB}) was bought from La Motteraye for €400,000.

There was just one Dubawi yearling in the Arqana October catalogue and she will eventually join the broodmare band being assembled by Jean-Louis Bouchard, who bought the half-sister to G1 Prix Jean Prat winner Intellogent (Fr) (Intello {Ger}) for €340,000 through agent Gerard Larrieu.

“I love Dubawi,” said Bouchard , who was in the restaurant with Larrieu and trainer Pascal Bary as the Ecurie des Monceaux-consigned filly (lot 77) went through the ring. “I like the filly, she's very tall. I bought a stud about four or five years ago and we have been building that up and I need very good mares for the future. I think she should be a very good broodmare, she's the sister of a Group 1 winner, she's got everything [going] for her.”

Michael Donohoe of BBA Ireland signed up one of the two Galileo (Ire) colts in the sale, a half-brother to the G1 Coral-Eclipse S. winner Mukhadram (GB) (Shamardal), sold as lot 55 through Haras des Capucines for €260,000.

“He's been bought for an established client who has horses in training in France, Ireland and England,” said the agent. “We thought he was a good physical and obviously he has a good pedigree. They're not making Galileos any more so we thought he was a bit of value.”

The colt is out of Magic Tree (UAE) (Timber Country), a half-sister to the Group 1 winners Mastery (GB) (Sulamani {Ire}) and Kirklees (Ire) (Jade Robbery).

Cloth Of Stars (Ire), another Group 1 winner bred on the Sea The Stars–Kingmambo cross, has his first yearlings for sale this year and made quite a splash on Monday through lot 145, the half-brother to G3 Prix de Ris-Orangis winner Ocean (Fr) (Exosphere {Aus}). Bred by Julian Ince as Haras du Logis, where the stallion stands, the colt is out of Tevara (GB) (Compton Place {GB}), who is also responsible for the listed winner Aiming For Rio (Fr), by another Logis stallion, Rio De La Plata. The mare is out of the G2 Cherry Hinton S. winner Torgau (Ire), whose sire Zieten also stood at Haras du Logis.

“It's fantastic,” said Ince after Anthony Stroud signed for the son of Cloth Of Stars at €280,000. “We brought three here by the stallion and they loved them. Someone even accused me of cloning yearlings as they all look so alike. It's great to have a stallion who is producing such lovely stock.”

A Duo For Australia

Niall O'Connor, who graduated from the Godolphin Flying Start  course last year, got his career as a bloodstock agent off on a promising footing with the purchase of two yearlings for the Australian training partnership of McEvoy Mitchell Racing.

His second signing of the day at €185,000 was for lot 91, a daughter of Camelot (GB), who has enjoyed notable success in Australia through Group 1 winners Russian Camelot (Ire) and the ill-fated Cox Plate winner Sir Dragonet (Ire). Consigned by Anna Sundstrom's Coulonces operation, she is the first foal of 3-year-old winner Pink Paint (Fr) (Redoute's Choice {Aus}) from the Wildenstein family of Arc winner Peintre Celebre.

The agent had also struck early for lot 12, going to €105,000 for a daughter of Le Havre (Ire) and another first foal, this time out of the winning Rajsaman (Fr) mare Gouville (Fr). The further family includes a name familiar to Australian racing fans in Contributor (Ire) (High Chaparral {Ire}), a dual Group 1 winner in the country for John O'Shea and Godolphin.

“This was a team effort between Tony and Calvin McEvoy and their regular agent Damon Gabbedy, who unfortunately couldn't be here because of the travel restrictions,” said O'Connor, who has previously worked at both Keeneland and Magic Millions. He has also completed stints with agents Dermot Farrington and Jeremy Brummitt, with the latter charged with buying yearlings for Quantum Leap Racing, which is run by O'Connor's father, Eamonn.

He added, “While on the Flying Start I had a work placement with McEvoy Mitchell Racing at Flemington and they expressed an interest then in getting involved in Europe. Hopefully these two fillies can prove their worth on the track. The market has been so strong for colts this year. We looked last week at Tattersalls and came on here in the hope of finding a bit of value. The Camelot filly was one of the nicest on the sale and we're lucky to have her.”

Selling recommences at Arqana at 2 p.m. on Tuesday.