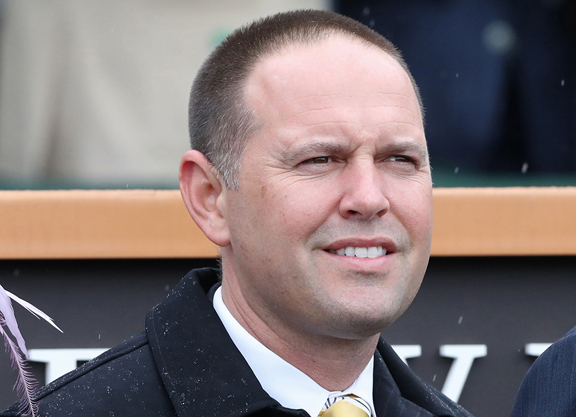 Perhaps no trainer felt the loss of Arlington Park more keenly than Chad Brown, who had dominated the historic track's signature Arlington Million Day card for the past decade, but the multiple Eclipse Award winner will have a pair of runners as he tries to keep the momentum going at the relocated–and truncated–Million card at Churchill Downs Saturday. Currently leading North American trainers with 10 Grade I wins on the year, Brown will be in search of a record-extending fifth victory in the Million when he sends out recent GIII Monmouth S. winner Sacred Life (Fr) (Siyouni {Fr}) in Saturday's nine-furlong race. The 7-year-old is 9-2 on the morning line and faces eight rivals, including morning-line favorite Smooth Like Strait (Midnight Lute), last year's GI Breeders' Cup Mile runner-up who is coming off a second-place finish in the May 30 GI Shoemaker Mile H.

Brown, who saddled the winners of all four graded races on the 2019 Arlington Million card, won his first Million in 2013 with Real Solution (Kitten's Joy). Four years later he was victorious with Beach Patrol (Lemon Drop Kid) and followed up that win in 2018-19 with Robert Bruce (Chi) (Fast Company {Ire}) and Bricks and Mortar (Giant's Causeway).

In Saturday's GI Beverly D. S.–a Breeders' Cup Win and You're In event–Brown will saddle Peter Brant and Michael Tabor's Rougir (Fr) (Territories {Ire}), who opened the year with a win in the GIII Beaugay S. and was most recently fourth in the July 16 GI Diana S. at Saratoga. The 2-1 morning-line favorite, Rougir could become Brown's record-extending seventh winner in the race.

New York-based jockey Manny Franco has the call on both Brown runners Saturday at Churchill.

“Manny has really come a long way with his skill,” Brown said of the 27-year-old rider Wednesday. “He really pays attention a lot, is always trying to get better at his profession and I see him at the best he's ever been right now. He has a really good agent with Jon Panagot, who's really great to work with, and he fits a lot of our horses well. He's willing to ride any level of horse. I find him equally effective on turf or dirt and he normally puts my horses in good positions.”

'Rising Stars' Do Battle in Special

The graded stakes action at Saratoga Saturday is headlined by the GI Fourstardave S.–another Win and You're In event–where the 6-year-old mare Regal Glory (Animal Kingdom), 6-5 on the morning line, will take on four male rivals.

Earlier on the card, a pair of 'TDN Rising Stars' will do battle in the GII Saratoga Special. Gulfport (Uncle Mo), who proved his seven-length debut victory was no fluke with a resounding 12 1/4-length score in the July 4 Bashford Manor S., is 4-5 on the morning line.

The precocious colt is co-owned by Jackpot Farm's Terry Green, Bill and Corrine Heiligbrodt and Whispering Oaks Farm and he will be making his first start since Coolmore joined the ownership group Saturday.

“That was one of the more exciting things when they made that phone call to us,” Green said of the new partners. “We feel like they're one of the best at what they do. We were excited to be part of their organization.”

Green, a veteran of the casino industry, named Gulfport after his hometown in southern Mississsippi.

“That's where I grew up and that's where my main business is,” said Green, who owns Island View Casino in Gulfport with Rick Carter. “That's the tough thing about these names. I've been kind of saving that name. Sometimes it can be tough to pull the trigger on it because you want that name to go somewhere and be in the record books. I'm very pleased with him so far.”

Despite the early success and the new high-powered partner, Green, who owns a 200-acre farm for cutting horses in Weatherford, Texas, is trying to keep his expectations for Gulfport grounded.

“Time always tells on these things, so you just try to keep both feet on the ground, but he's shown that he's a good, strong colt,” Green said. “He's been very healthy in both races with no problems. Steve [Asmussen] and all of us just love the way he travels and the way he covers the ground. We've never had anything like him before, so it's extremely exciting.”

Two-year-old fillies will be in the spotlight at Del Mar Saturday and another freshman sire, Good Magic, could make the grade when Vegas Magic, already a stakes winner at Pleasanton, faces five foes in the GII Sorrento S. Eclipse Thoroughbred Partners' Procrastination (Not This Time), a front-running eight-length winner of her July 4 debut at Los Alamitos, is the 8-5 morning-line favorite in the six-furlong race.

Going Global, coming off a third-place finish in the May 30 GI Gamely S., has a record of two wins and a second in three starts at Del Mar. She won last year's GI Del Mar Oaks and GII Goldikova S. at the oceanside oval.