Regal Glory Ready to Take On Males in Fourstardave 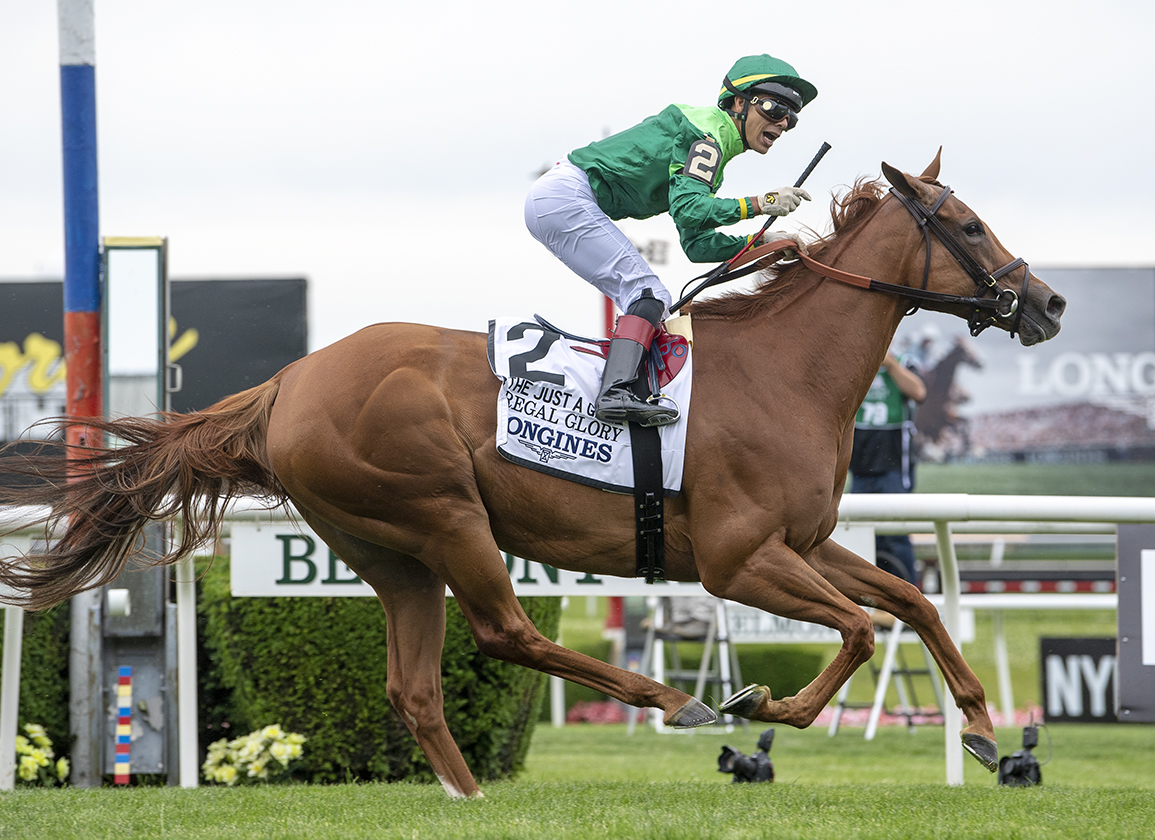 The two-time Grade I winner is unbeaten in three starts this year and is likely to go off as the favorite in the field of five signed up for the one-mile turf event. This will be her first try against males in a distinguished career with trainer Chad Brown that has produced 12 victories from 19 starts and earnings of $2,111,009.

Regal Glory has been with Brown throughout her five seasons on the track, but in an unusual twist, she has been owned by two of his clients, her breeder Paul Pompa and Brant. Three months after Pompa died at the age of 62 in October 2020, Brant purchased Regal Glory in the disbursement sale for $925,000. Since he acquired her, Regal Glory has won six of eight races and earned over $1.3 million.

“The reason that I bought her was because I ran against her a number of times and she always beat me,” Brant said. “I had a lot of respect for her. And I bought her because I thought Paul was a really great guy and a lucky guy. I just said to myself, 'I'm buying something from him.'”

Brant said that Brown recommended that he consider Regal Glory going into the sale, but felt he had paid too much for a 4-year-old filly without a Grade I win on her resume.

“He didn't think at that time that she would win,” Brant said. “It's really not a question that some horses make fools of you. They do what they do. Some of them, if you give them a little bit more time, they excel. She was good from the very beginning and she just got really good at six.”

Brown smiled and shook his head at the suggestion that he encouraged Brant to go after the filly at the sale.

“He always thought she was a great racehorse who had even further potential to develop as years went on,” Brown said. “I wasn't so sure. I knew she was talented, but he loved her pedigree and he loved everything about her. Mr. Brant is really an outstanding horseman. He knows horses physically. He knows the form of horses in races very well and he was adamant about trying to buy this horse and keep her going racing. He was right.”

Regal Glory had a solid 2021 season, but came up a half-length behind Brant's Brown-trained Blowout (Dansili (GB)) in the GI First Lady S. at Keeneland Oct. 9. Sent to Del Mar for the Bing Crosby meet, she led from gate to wire in the GI Matriarch S.

“She's just one of those fillies that improved a tremendous amount at five and six,” Brant said. “Some fillies at six they don't want to run anymore. They're a little tired, they've had a lot of battles, and they've just run out of steam, but she seems to be at her best.”

With the Grade I in the bank, Brant was planning to have her change careers and join his broodmare band. Before sending her to Kentucky, Brant and Brown decided to enter her in the inaugural running of the $500,000 GIII Pegasus World Cup Filly and Mare Turf. She came from well off the pace in her first start beyond a mile in two years to take the 1 1/16-mile race by 2 1/2 lengths.

“I was going to retire her at the end of the 5-year-old year, and then she ran that race down at Gulfstream and she blew everybody out,” Brant said. “I was talking that day to Walker Hancock, because I keep my most of my mares at Claiborne Farm, and he looked at me and said, 'I guess she's not coming back to the farm.'”

Regal Glory's retirement was put on hold and she stayed in training. She won the GI Jenny Wiley S. at Keeneland in April and rolled to a decisive 3 1/2-length victory in the GI Just A Game S. at Belmont Park in June.

“Oh, yeah, she's really exceeded my expectations, Brant said. “I thought maybe I'd win a Grade I with her.”

Now she is a multiple Grade I winner for Brant and is taking on males in the Fourstardave. She would be the second female to win the race, following Got Stormy (Get Stormy), who was first at the wire in 2019 and again last year.

“I've been pointing for this race for a while,” Brown said. “I like keeping her to a mile distance. I like the spacing from her last race, the Just A Game. It appears right now that she is the leader of the division and I think giving her new challenges to face at this stage of her career, now that she is six, seems like the appropriate thing to do. A try against the boys in a very prestigious race. I just think she deserves the opportunity.”

Despite his dominance at Saratoga, where he has won four of the last six meet titles–and leads again this season–powered by his elite stable of grass runners, Brown, 43, has yet to win the Fourstardave. It hasn't been for lack of trying: he has four seconds and one third from 13 starts. With Regal Glory and Juddmonte's Masen (GB) (Kingman (GB)), Brown will have multiple entries for the fourth-straight year.

Brown said there are a number of elements to consider before sending a female in against males: “Scheduling. Distance of race. What kind of form she is in. Trying to manage a campaign to potentially win an Eclipse Award. All those things. Factor in what weight she is going to carry. It's all a careful decision in what we want to do and I think the time is right.”
Brown said Regal Glory is doing great.

“She has never looked better or trained better,” he said.

Since the Fourstardave is a handicap, Regal Glory will carry 119 pounds, four less than stablemate Masen, the top weight. Brant figures she should be getting more of a break because of her gender, but the racing office had to take her success into account when making the assignments.

“She's really carrying top weight running against the boys,” Brant said. “I'm not so keen about it, but that's where Chad wants to run her and I think I'll be watching very anxiously.”