Brody's Cause's Sittin On Go Upsets in the Iroquois 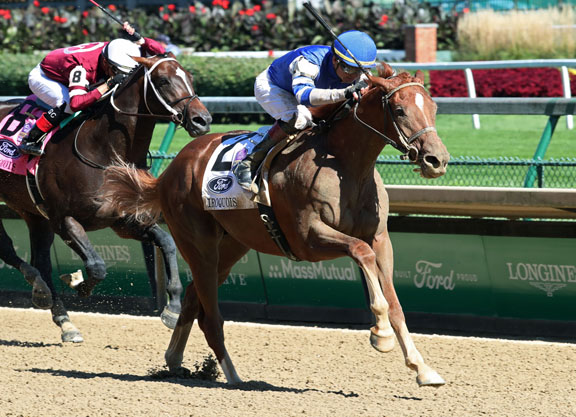 Longshot Sittin On Go blew past his rivals in the stretch to become the first stakes winner for his freshman sire (by Giant's Causeway), who was campaigned by these same connections. The chestnut was wheeling back on relatively short rest after an off-the-pace 4 1/4-length tally going five furlongs at Ellis Aug. 16–he earned just a 49 Beyer Speed Figure.

Unhurried early and guided a bit off the potentially dead rail, Sittin On Go traveled nicely on the bridle while far back as odds-on Therideofalifetime (Candy Ride {Arg}) zipped away through splits of :23.04 and :45.64. He was still hard held by Corey Lanerie heading around the turn, and circled up very wide into the lane. Midnight Bourbon wrestled the lead away from the chalk at the top of the lane, but Sittin On Go continued to gobble up ground and kick away convincingly to stamp his ticket to the GI Breeders' Cup Juvenile.

“We're having ourselves a great weekend,” said trainer Dale Romans, who also saddled 'TDN Rising Star' Girl Daddy (Uncle Mo) to a victory in Thursday's GIII Pocahontas–the equivalent race to this one for fillies–for Dennis Albaugh and Jason Loutsch's powerful stable. “This horse reminds us a lot of his father. We were pretty confident he'd be able to stretch out from his training and this race set up perfectly for us. We're on to the Breeders' Cup.”

Lanerie, who rode Brody's Cause to an 11-1 victory in the 2015 GI Claiborne Breeders' Futurity while employing very similar tactics, offered: “He broke really good and put me right where I thought he would be after watching his replay from Ellis Park. Down the backside, he was trying to get out on me. I don't know why, but he settled in real nice. I was actually going to follow Dale's other horse [Ultimate Badger {Commissioner}], but I had so much horse, I went to the outside and let him come on. Watching the races, it looked like the outside is the best place to be. I didn't want any excuses for getting him stopped. I put him in the clear and he was just like his daddy.”

Dennis Albaugh said, “Man, to pick up the Pocahontas and then follow it up with the Iroquois two days later is unreal. We couldn't be happier. That's why we're in the racing business. That horse was unbelievable coming around the turn. I was like, 'Man, he's moving.'”

Pedigree Notes:
Brody's Cause was a $350,000 Keeneland September yearling purchase in 2014, and was third in the GI Breeders' Cup Juvenile after his Breeders' Futurity win. He added the GI Toyota Blue Grass S. at three before checking in seventh in the GI Kentucky Derby. The Spendthrift Farm resident has been represented by three winners thus far.

More Than Ready has now sired the dams of 43 graded stakes winners. Dam Set'n On Ready–whose dam is by Brody's Causeway's sire Giant's Causeway–was a precocious type who was claimed for $35,000 out of her final career start. She hails from the female family of European highweight sprinter Lucayan Prince, MGSW Comic Strip, and graded stakes winner and producer Silver Comic. Set'n On Rady was barren in her next two seasons before producing a Mor Spirit filly this January. She was bred back to Flameaway.