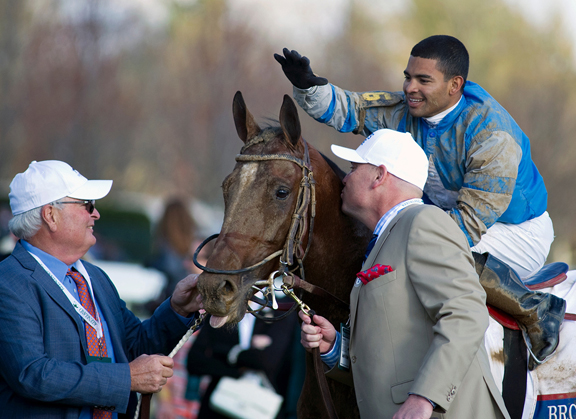 ARCADIA, CA – Owner Dennis Albaugh has been in this position before. Actually, a couple of times now.

Carrying the blue-and-white silks of his Albaugh Family Stables, Not This Time (Giant's Causeway) was a crushing second to Classic Empire (Pioneerof the Nile)–beaten only a neck–as the 5-2 choice in a thrilling renewal of the GI Breeders' Cup Juvenile held at Santa Anita in 2016.

Brody's Cause (Giant's Causeway) launched from the clouds in the previous year's renewal at Keeneland, reporting home a very respectable third behind Nyquist (Uncle Mo).

Tabbed as the “Billionaire Weed Killer” and “Pesticide Prince” in a Forbes magazine profile after making his fortune in the agribusiness, the 70-year-old returns to Arcadia, California, with the highly regarded 'TDN Rising Star' Dennis' Moment (Tiznow) in the headliner on the 'Future Stars Friday' program. Drawn on the fence with Irad Ortiz, Jr. in the irons, he is listed as the 8-5 morning-line favorite.

“To bring home a win there would be unbelievable,” Albaugh, recognized as Iowa's first billionaire, said. “I'm looking at the wall in my office and I've got a bunch of framed saddle towels on it from the big-time horse races that we've won. A lot of them I left the dirt from the track right on them. I certainly want to add that Breeders' Cup Juvenile up there.”

Well-touted by trainer Dale Romans from the git-go, Dennis' Moment–yes, he sure is named after Albaugh–made headlines after his June 23 debut at Churchill Downs, but for all the wrong reasons. The $400,000 Fasig-Tipton Saratoga yearling purchase, bred in Kentucky by Tolo Thoroughbreds, took a hard bump and clipped heels shortly after the start, dramatically unseating jockey Robby Albarado in the process.

Clearly unfazed by the ordeal, Dennis' Moment returned with a 'Rising Star' performance second out, graduating by 19 1/4 lengths in a jaw-dropping, front-running performance at Ellis Park July 27, good for a gaudy 97 Beyer Speed Figure.

Hammered down to 2-5 while making his two-turn debut in the GIII Iroquois S. beneath the Twin Spires Sept. 14, Dennis' Moment proved much the best, punching his ticket to the big dance with a geared-down, 1 3/4-length victory.

“We're very excited,” Albaugh said. “I couldn't be happier about this. Things went sideways first time out, but we knew we had a good horse. We're making the trip out to California and eight of my buddies are going with me. We've loved him since the day we bought him up in New York. We liked everything about the looks and presence of him. He's unreal. You get around him and he's like a pet–a lot of other racehorses that I've had in the past will try and bite you and everything else. He's got a very good demeanor about him.”

Although a fan of the sport in his earlier days–he and his wife would attend the races at the now defunct Ak-Sar-Ben in Nebraska–Albaugh credits his son-in-law Jason Loutsch for getting him involved in the ownership side of things.

“I always just loved it, but really my son-in-law came along and got me very fired up about racing,” Albaugh said. “We started off and we bought a few horses and I kept telling him, 'this is fun going out and winning races.'”

Those good times began with graded winner Miss Macy Sue (Trippi), who finished third in the inaugural running of the Breeders' Cup Filly and Mare Sprint at a saturated Monmouth Park in 2007.

“She went all over the country and won just short of a million dollars–every time we took her somewhere, she won,” Albaugh said proudly. “That was the turning point–it just got in my blood. Every year we breed our own horses and we also buy about eight-to-10 yearlings. I have to give the thanks to my son-in-law. This is in his blood and it has been since he's been a kid.”

The Ankeny, Iowa, native Loutsch and Albaugh's daughter Tiffany were high school sweethearts and have been married for 20 years now. The eldest of the couple's two daughters is a junior in college. In addition to serving as the stable's general manager, Loutsch is also the owner of development company MJ Properties.

“We've got live racing at Prairie Meadows and I always watched the Kentucky Derby growing up as a young kid,” Loutsch said of his early interest in racing. “One of my best friends grew up on a farm and we rode horses all the time, too. I was a real athletic, competitive kid growing up and this allows me to continue my competitive juices because there's nothing like a horse going into the gate for the big races.”

The aforementioned Miss Macy Sue has quickly proven herself as a foundation mare for the operation, producing 2015 GI Breeders' Cup Dirt Mile and GI Woodward S. winner Liam's Map (Unbridled's Song) (he brought $800,000 as a KEESEP yearling) and the aforementioned GIII Iroquois S. winner Not This Time, who was retired after his runner-up finish in the Juvenile.

In addition to the two-time Grade I winner and Juvenile third Brody's Cause, Albaugh has also campaigned standouts such as Grade I winner Free Drop Billy (Union Rags) and graded winners Cozzetti (Cozzene) and J Boys Echo (Mineshaft).

He reloaded at this year's Keeneland September Sale, purchasing eight yearlings–led by a $500,000 Curlin colt and a $500,000 Uncle Mo filly–for a total of $2.655 million ($331,875 average). Albaugh currently owns approximately 60 head, including a broodmare band of 10 to support former runners and young stallions Brody's Cause (Spendthrift Farm), Free Drop Billy (Spendthrift Farm) and Not This Time (Taylor Made Stallions).

“We buy horses, colts, to try to get to this level,” Loutsch said. “Our ultimate goal is the 3-year-old season, but to have horses like Dennis' Moment that put us in these positions as 2-year-olds is really fun.”

Loutsch continued, “Dennis didn't even know that we were naming Dennis' Moment after him. I talked to [Albaugh's bloodstock and training manager] Barry [Berkelhammer] and got some indication that this horse was going to be special. I'm really happy and excited for Dennis. The amount of money that he's put into this game and to see how much fun he's having, it's been really special. It's been fun for our family.”

“Everybody says that I've had a lot of luck in it,” Albaugh said. “I really don't consider it luck when I've got the team of people that I've put together. We do our research very well and we got our system down. I'd love to win the Kentucky Derby–that's my mission–and I'm sure a lot of people in the horse business would love to as well. The sport is unbelievable.

He concluded, “We're a real big player in the chemical business in the United States and Brazil and Argentina now. The chemical company is working very well for us. The horse business is kind of a sideline, but it's an awful fun sideline.”

The fun continues for the Albaugh Family at 4:03 p.m. PT Friday.