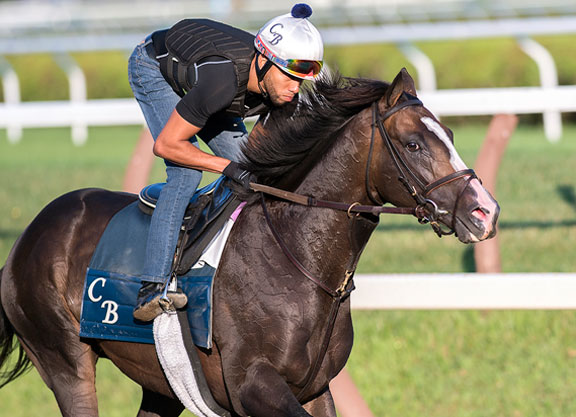 When stablemates Bricks and Mortar (Giant's Causeway) and Robert Bruce (Chi) (Fast Company {Ire}) first met in the June 8 GI Manhattan S. at Belmont, division-leading Bricks and Mortar got the jump while Robert Bruce was stuck in some midstretch traffic, and kicked away to a 1 1/2-length conquest. Saturday, the two will reconvene at Arlington Park for the 37th running of the GI Arlington Million, where Robert Bruce will be defending his title after taking home last year's Million trophy.

Klaravich Stables and Bill Lawrence's Bricks and Mortar, four-for-four to start his career before running third in the local GIII Saranac S. as a sophomore two summers ago, was famously lost to injury for over a year after filling the same slot in the GIII Hill Prince S. at Belmont. Returning to powerfully annex the GI Pegasus World Cup Turf Invitational S. second off the layoff Jan. 26, he reeled off victories in the GII Muniz Memorial H. at Fair Grounds and GI Old Forester Turf Classic S. at Churchill before returning home to take the Manhattan, asserting himself as the clear favorite for champion turf male.

Robert Bruce, undefeated in six starts in his native Chile, including two Group 1 triumphs, scored in his Stateside debut in the GIII Fort Marcy S. last spring before running sixth, beaten just a length, in the Manhattan. Shipped to Chicago, he finished fastest of all to earn a half-length success in the Million, but was a well-beaten runner-up in the GI Joe Hirsch Turf Classic Invitational and a no-factor seventh in the GI Breeders' Cup Turf to close out his 4-year-old season. Fifth at odds-on when defending his Fort Marcy crown, he ran on well after being forced to idle in traffic to be second in the Manhattan when returning to his preferred firm ground. He'll likely get that ground again Saturday as forecasts are clear for the big day in Arlington Heights.

Coolmore's Magic Wand (Ire) (Galileo {Ire}), the only filly in the 10-horse field, has already placed in a pair of Grade I events so far this year and takes her fourth journey across the Atlantic for Aidan O'Brien. Winless since a dominant success in the G2 Ribblesdale S. last June at Royal Ascot, the bay was runner-up in both the G1 Qatar Prix Vermeille and G1 Prix de l'Opera Longines at Longchamp before finishing fourth in the GI Breeders' Cup Filly & Mare Turf. Completing the exacta again behind Bricks and Mortar in the Pegasus Turf, she was fifth in the G1 Dubai Sheema Classic and third, beaten less than a length in the GI Man O' War May 11 at Belmont. Second two more times in the Wolferton S. and G1 Juddmonte Pretty Polly S. back in Europe, she'll try to rebound from a rare poor effort after finishing last of 11 behind superstar Enable (GB) (Nathaniel {Ire}) in the G1 King George VI & Queen Elizabeth S. just two weeks ago at Ascot.

Fiona Carmichael's Intellogent (Ire) (Intello {Ger}) looks to get back to the Group 1-winning form from his sophomore season in this North American bow. Notching a 10-1 upset in the G1 Qatar Prix Jean last July at Deauville, he was off the board in his next two before running third at 16-1 when debuting as a 4-year-old in the G2 Prix d'Harcourt Apr. 7 at Longchamp. Last of five in the G1 Prix Ganay there three weeks later, the chestnut bounced back to be fourth, beaten 1 3/4 lengths, in the G1 Prix d'Ispahan last out May 26 in Paris. The Fabrice Chappet trainee adds blinkers and Lasix for this test and will be piloted by Florent Geroux, who won the 2015 Million aboard The Pizza Man (English Channel).