Home » Archive » Shared News » Down and Possibly Out, Bricks and Mortar Has Climbed to the Top

Down and Possibly Out, Bricks and Mortar Has Climbed to the Top 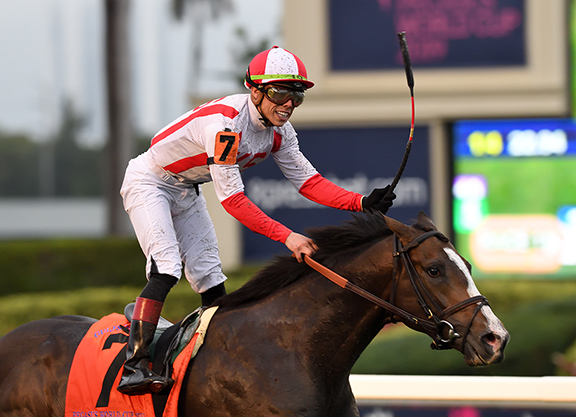 At this time last year Bricks and Mortar (Giant's Causeway) was starting over, re-learning the lessons that had enabled him to become a standout 3-year-old turf runner in 2017. Though he was nine months removed from career-saving surgery performed by Dr. Larry Bramlage at Rood and Riddle Equine Hospital in Lexington, Ky., there was no guarantee that he would be able to regain the brilliance.

While sport is littered with tales of athletes who never could make a full comeback from injury, Bricks and Mortar is an unqualified success story. In this second chapter he has won all five of his starts–three of them in Grade I races this year–is top-ranked in the NTRA poll and is the 8-5 morning-line favorite in the Saturday's GI Arlington Million at Arlington Park.

“It's gratifying to see a horse come back and do well, that you help them get to their potential,” Bramlage said. “We always joke about the fact that veterinarians that work on racehorses don't retire. They try to retire and then you end up seeing them back part-time or seeing them as consultants. I think the reason is because it's reinforcing to test your work continuously. And it keeps it interesting.”

Bricks and Mortar has been anything but boring. Following a troubled third by three-quarters of a length in the GIII Hill Prince S. in October 2017, he was diagnosed with stringhalt, a neuro-muscular condition, in his right hind leg. Preakness winner War of Will (War Front) has a mild case of stringhalt, but Bricks and Mortar was far more severely affected, to the point where he could not gallop and needed surgery. During the lengthy recovery and re-training period he had to overcome another problem. Trainer Chad Brown acknowledged that during the 14 months between starts he feared that Bricks and Mortar, owned by Klaravich Stables and William Lawrence, might not make it back to competition. Brown said that even if he was able to return, Bramlage told him there was a 50-50 chance Bricks and Mortar would be capable at the same level.

“Dr. Bramlage worked his magic. Again,” Brown said. “He's operated on so many high-profile horses for us and got them back. This is probably one of his best pieces of work. This horse took a long time and he then had some other issues, some bone remodeling. We tried him back and he needed some more time. When he finally made it back he was better than ever.”

The gap between the Hill Prince and an optional claimer at Gulfstream Park on Dec. 22, 2018 was 440 days. He won that first race by a half-length, has since won the GI Pegasus World Cup Turf Invitational, the GII Muniz Memorial Handicap, the GI Old Forester Turf Classic and the GI Manhattan and is once again a bright star in Brown's talent-deep stable.

“I'm pleasantly surprised,” Brown said. “I'm not surprised at his potential; I'm surprised he reached it, given his long break and the surgery and such. I always thought he had the potential to be this good. He was a remarkable 3-year-old, winning the [GII] Hall of Fame. He really never should have lost a race, this horse. In his two losses, he really was in a lot of trouble.”

Brown said he believes that an important reason why Bricks and Mortar had a better chance to recover was that the injury and resulting lameness did not appear to involve any pain.

While uncommon in Thoroughbreds, Bramlage said that stringhalt is an old lameness more commonly seen in draft horses. It involves tendon-muscle junctions, usually one muscle, the lateral digital extensor.

“We believe that it happens when a horse somehow overextends the hind leg,” Bramlage said. “The reason we believe that is draft horses will get it when they are pulling a load and their feet break out from under them and they go down on their belly with their legs extended straight out backwards. A horse rarely does that, but the draft horse people have noticed that when that happens the horses sometimes develop stringhalt the next day or within a few days.”

Bramlage described stringhalt as a disruption in the normal coordination of motion in the hind leg.

“Horses are about two-thirds or more spinal reflex,” he said. “What that means is that when they start galloping it happens automatically. They don't have to think about it with their brain. It happens just in the local reflex arcs. That actually is one of the things you try to train when you're training a horse, is you develop that reflex arc so that it works efficiently. Now if a horse strains the muscle tendon junction and damages the connection of the nerve to the muscle and tendon, that reflex arc gets mixed up and instead of flexing at the correct time it flexes abnormally, it will over-flex compared to what it should be.”

The surgery involves removing the muscle-tendon junction that is providing the wrong neurological information to the body and the one muscle. Due to the severity of the situation, surgery–performed on Nov. 10, 2017–was the only option for Bricks and Mortar.

“The question mark always is,” Bramlage said, “is there more than one muscle involved? This one, the lateral extensor, is one of two extensors that the horse has in their hind legs. Two muscles that lift the toe, and it's actually the least-important one, fortunately. You can take that thing out and it doesn't affect the horse's ability at all. The real question mark is if it involves some other muscle-tendon junction as well, you can't take out the rest of them, like the flexors of the stifle and the big muscles of the hip. You can't take those muscle-tendon junctions out, but you can the lateral extensor. We were fortunate with Bricks and Mortar that it involved only that one muscle for him.”

Bramlage said it was rare for a race horse to have the level of stringhalt that threatened Bricks and Mortar's career. He estimated that Rood and Riddle sees two to four cases a year. The surgery can be termed a success by analyzing the horse's action a few days after the procedure, but it takes six months or more for the horse to regain full coordination. Bramlage said he could not recall another patient who has had as much success as Bricks and Mortar. With his explosive stalk-and-pounce tactics, he is 9-0-2 in 11 starts and has earned $4.3 million in purses.

“He's a really great, good-looking horse,” Bramlage said. “I think what's impressive is his style of running because not very many horses run like that anymore. They tend to go at or on the lead. He just sits off the back of the pack and passes them all.”