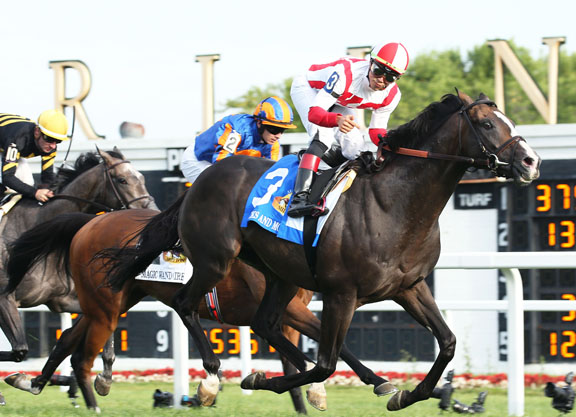 It would appear that trainer Chad Brown finally has this thing figured out.

The New York-based conditioner had managed to win two of the three Grade I events comprising Arlington's International Festival of Racing–the Arlington Million, the Beverly D. S. and the Secretariat S.–each of the last three years, falling short in the Million in 2016 and in the Secretariat in 2017 and 2018. On paper, he had the ammunition to complete the trifecta this year, with the favorites in all three heats, two of those that figured long odds-on. Still, the horses have to go out and do it on the track, and so they did, as Bricks and Mortar (Giant's Causeway) added to victories from defending champion Sistercharlie (Fr) (Myboycharlie {Ire}) in the Beverly D. and 'TDN Rising Star' Valid Point (Scat Daddy) in the Secretariat in America's original seven-figure horse race.

Brown entered Saturday's Million tied with the likes of Charlie Whittingham (Perrault, 1982; Estrapade, 1986; and Golden Pheasant, 1990) and Ron McAnally (John Henry, 1981 & 1984; and Tight Spot, 1991) as three-time winners of the race. In sending out Robert Bruce (Chi) (Fast Company {Ire}) to win last year, he surpassed the two Million scores registered by his mentor, the late Bobby Frankel, who won twice in three years with Chester House (2000) and Beat Hollow (GB) (2002).

Bricks and Mortar has overcome a potentially career-ending condition to become a leading candidate for U.S. Horse of the Year, with prior scores in the GI Pegasus World Cup Turf, the GI Old Forester Turf Classic and a latest defeat of Robert Bruce in the GI Manhattan S., in which he covered 42 feet more than the runner-up.

Made the 1-2 chalk to complete a Festival Pick Three that was set to return $6.70 for the dollar, Bricks and Mortar was away without incident and landed smack dab in centerfield as GIII Arlington H. hero Bandua (The Factor) was ridden positively by Adam Beschizza to lead in advance of the globetrotting Hunting Horn (Ire) (Galileo {Ire}). Magic Wand (Ire) (Galileo {Ire}), second to Bricks and Mortar in the Pegasus, found herself in the box seat, while Robert Bruce tracked his stable companion while hard held just in behind.

The pace was a steady one throughout–Bandua raced past the six-furlong marker in :48.65 and entered the final half-mile after three-quarters of a mile in 1:12.94–but Irad Ortiz, Jr. was keeping his powder dry from six, apparently content to save ground and willing to roll the dice when push came to shove. Bandua continued to boss the Million field as the quarter pole loomed, but they were warming up to the task behind him, particularly the Wayne Lordan-ridden Magic Wand, who popped off the fence and looked dangerous in upper stretch. But Ortiz never felt a moment's panic, as he eased Bricks and Mortar into the three path about a furlong down, confronted Magic Wand and Bandua with a quick turn of foot and edged clear.

Bricks and Mortar, who will enter stud at Shadai Stallion Station in Japan at the conclusion of his racing days, is one of three full black-type winners for his dam, a stakes winner and four times group-placed in France ahead of a runner-up effort in the GIII Bewitch S. in 2003. Beyond the Waves is a half-sister to MSW & MGSP Seahawk Gold (At the Threshold) and to Miss Excitement (Rajab), dam of GISW Bordonaro (Memo {Chi}) and Miss Empire (Empire Maker), a MSW/GISP runner who was also second against the boys in the 2012 GII Best Pal S. Barren to Quality Road for 2018, Beyond the Waves produced a colt by Runhappy this past April. She was bred to both Uncle Mo and Runhappy thereafter.