Bolt d'Oro Yearlings Predicted to Be in High Demand 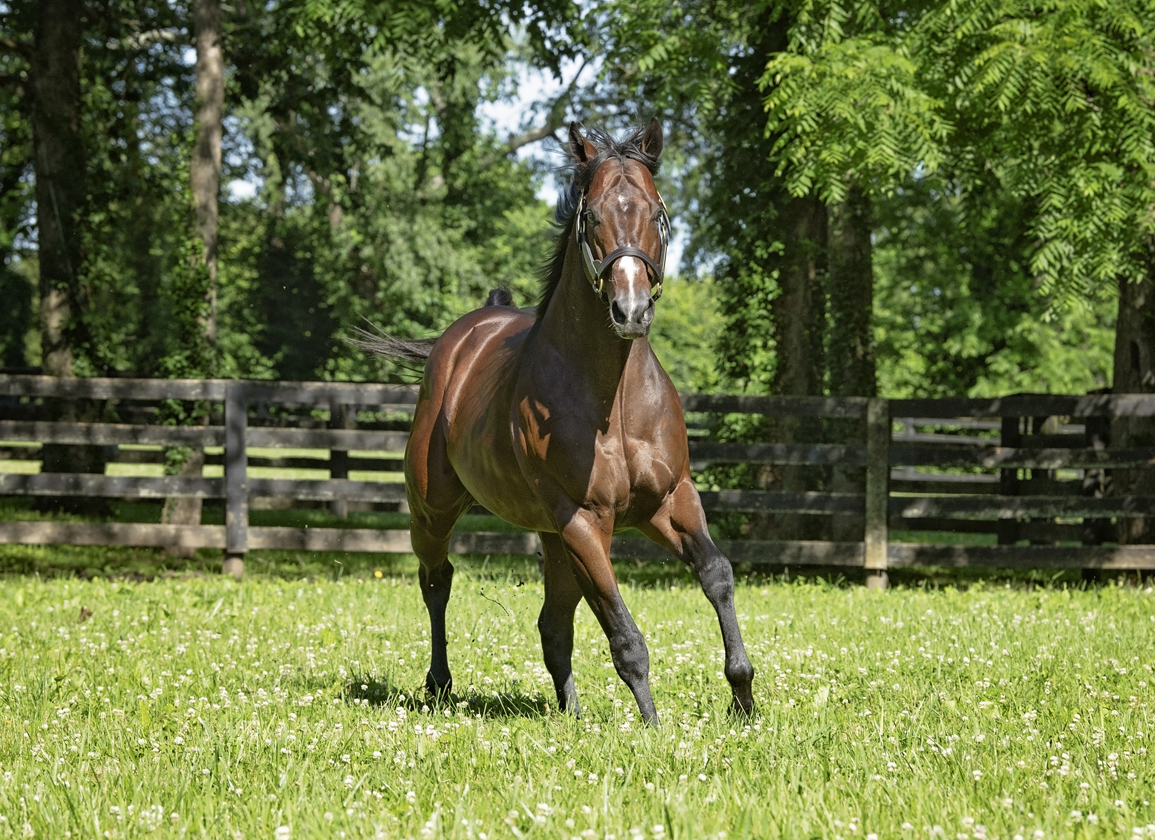 Tim Hamlin, owner and operator of Wynnstay Farm, is high on the filly by first-crop yearling sire Bolt d'Oro (Medaglia d'Oro-Globe Trot, by A.P. Indy) his consignment will be presenting at the upcoming Fasig-Tipton July Sale.

“One word to describe her is athletic,” he said of the youngster that will sell as Hip 94 on July 13. “She's a later filly out of a mare called Wall of Worry (The Cliff's Edge). She's been athletic from the day she was born. She does everything we want her to do and she's been healthy, straightforward, good-minded and everything you could want.”

Hamlin has already had good luck with Bolt d'Oro and his first crop. At last year's Fasig-Tipton November Sale, his Wynnstay Sales consignment sold the co-highest weanling by the Spendthrift sire when a filly out of Clarendon Fancy (Malibu Moon) and from the family of GISW Girvin (Tale of Ekati) and GISP Midnight Bourbon (Tiznow) brought $280,000, selling to Spendthrift Farm.

“All three of them that I have had have been super, super athletic,” Hamlin noted. “I wish I could have had more, but they would only let us have so many because everybody wanted them. The ones we have are rock stars. We love them and have more mares bred to him. We think he's going to be a hit.”

Hamlin isn't the only one wishing he had another Bolt d'Oro yearling or two in his barn. According to Spendthrift's Mark Toothaker, demand for the dual Grade I winner was high from the start.

“In his first year, we had twice as many applications as we had spots,” he shared. “We were able to go through and really take our pick of the mares we wanted, so he got an outstanding group.”

Retired to stud in 2019 with a $25,000 initial fee, Bolt d'Oro bred 214 mares in his first book. Held steady at the same stud fee the following year after shuttling to Spendthrift Australia for a season, he bred an additional 146 mare. Toothaker said the smaller book size was due in no part to decreased demand.

“We started trying to control it to where we were only breeding him a couple times a day. We found that to be a little bit better fit for him.”

This year, Bolt d'Oro's stud fee was adjusted to $15,000 with across-the-board fee cuts at Spendthrift due to Covid-induced uncertainties for breeders. 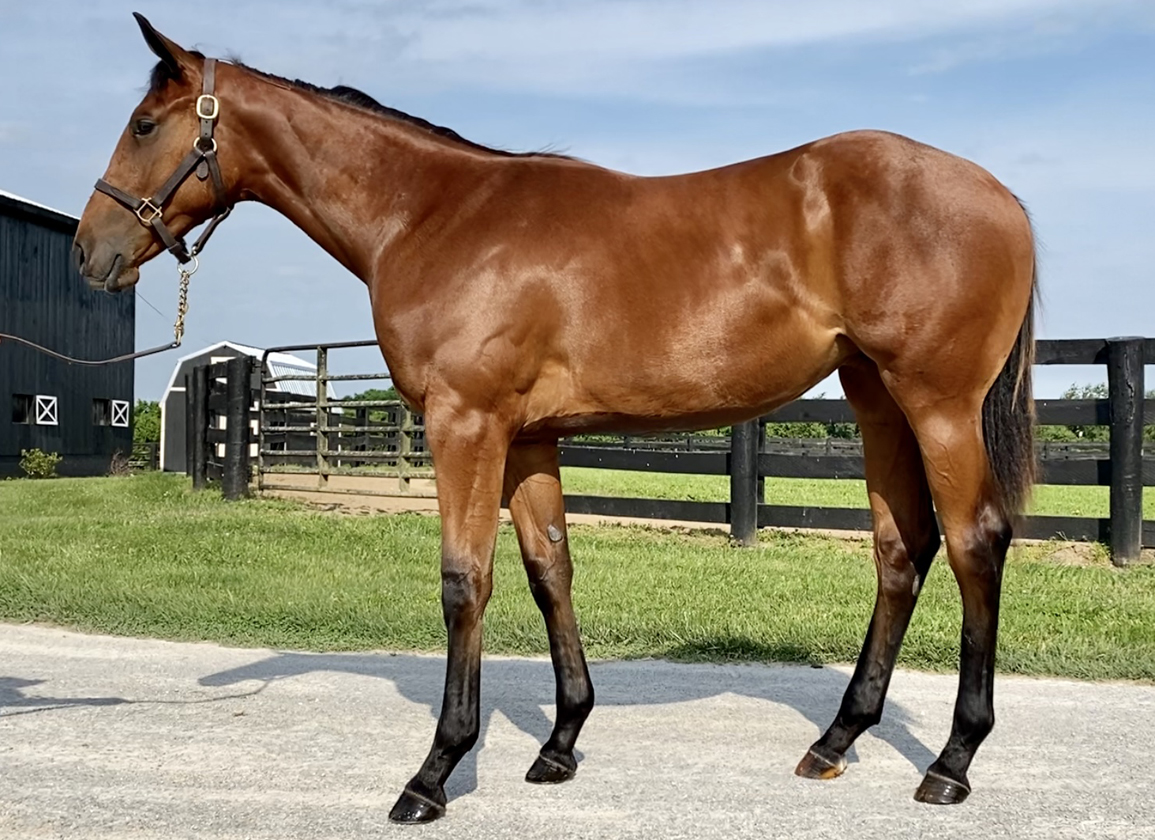 Bolt d'Oro filly out of Wall of Worry sells as Hip 94 at the Fasig-Tipton July Sale.

At last year's weanling sales, Bolt d'Oro ranked amongst the top five first-crop stallions in North America by average when 30 of 36 of his progeny sold to average $76,966. Along with Wynnstay's $280,000 filly at Fasig-Tipton's sale, another Bolt d'Oro weanling brought the same price days later at the Keeneland November Sale. The colt out of stakes winner C. S. Incharge (Take Charge Indy) from Clarkland Farm sold to Sand Hill Stables.

“The pinhookers were really wanting to buy them,” Toothaker said. “Anytime you have the pinhookers talking about how, 'We need to land a Bolt,' or 'We chased a couple of Bolts but weren't able to have enough money to get it done,' that's what you're looking to hear on the sales ground. He's a very exciting horse. He's got the looks, he's got the pedigree and I look for him to be a serious sire for us.”

“The Frontrunner was just an unbelievable race,” Toothaker recalled. “He absolutely demolished that field and I thought that was his best race. This horse was just so brilliant with his stride; he was able to leap. It was so amazing how much ground he could cover.”

Bolt d'Oro ended his juvenile season with a third-place finish in the GI Breeders' Cup Juvenile and came back at three in the GII San Felipe S. After a stretch battle with fellow GISW McKinzie, he was awarded the win via  disqualification. He then ran second to future Triple Crown winner Justify in the GI Santa Anita Derby and, after unplaced finishes in his next two Grade I starts, retired with earnings of over $1 million.

Toothaker recalled a story of watching the horse train at Keeneland, “The kid that was on him, I don't want to say he messed up, but he broke off too far behind. Mick had put a rabbit in there as a workmate and when they broke, you're thinking he's never going to be able to catch that horse because they had separated themselves too much. But not only did he catch him, it was one of the most unbelievable works I had every seen. He worked :1.10 and change, at Keeneland, and I mean I can count on one hand how many horses I've seen ever work that fast. It was an amazing morning and one of those that I'll never forget.”

Bolt d'Oro's effortless speed combined with a Classic pedigree has Toothaker excited for the  stallion's first progeny to hit the track.

“The thing about Bolt is, we just haven't seen many horses by Medaglia d'Oro out of A.P. Indy mares that are so good as 2-year-olds,” he explained. “Here's a horse that is bred to run all day long and has two Grade I wins at two. With his pedigree, it's kind of freakish. You feel like with his progeny, he'll have every chance to sire a Derby horse. He's got the pedigree to get the Classic distances, no doubt.” 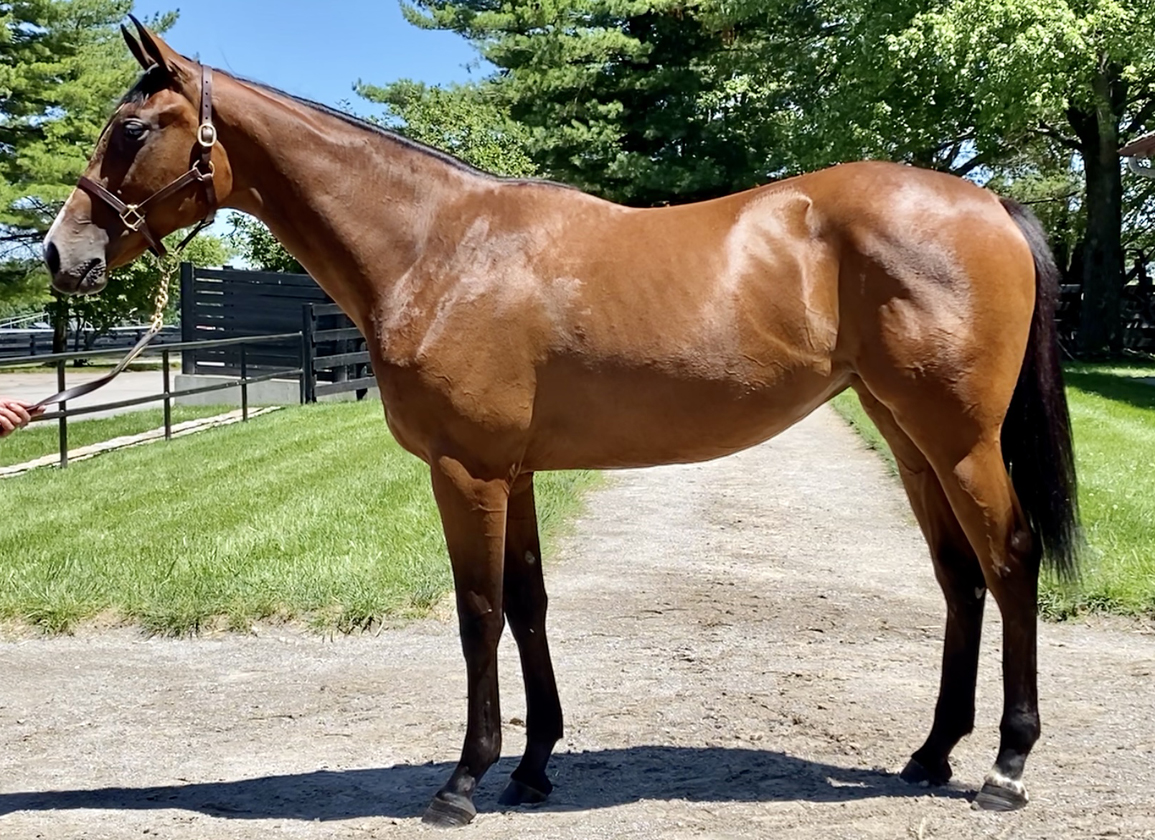 Bolt d'Oro filly out of Moment of Speight (Ire) sells as Hip 227 at Fasig-Tipton July.

Mark Taylor agreed that based on the yearlings he has seen, they should be able to stretch out with ease.

“These Bolts to me look like they'll be fast, but they don't look like one-dimensional horses that are going to be done early in their 2-year-old year,” Taylor said. “I think you're going to see plenty of Bolts run early, but I think they're going to be more Classic-type horses at the end of the day.”

Taylor said that one of Taylor Made's July-bound yearlings, a filly out of the Speightstown mare Moment of Speight (Ire) selling as Hip 227, fits the description.

“She's a long, stretchy filly that looks like she can run two turns,” he said. “She's got a good hip to her and is very well balanced with a lot of strength over her top line.”

Of the trends he's seeing in Bolt d'Oro's progeny overall, Taylor added, “I've seen consistently good horses popping up at the different farms I go to. I think he's a prepotent stallion. He seems to be dominating his mares a little bit and he's throwing a lot of length with plenty of strength behind, which is a great tandem to have in the market and on the racetrack. I'm very bullish on what I've seen so far.”

Toothaker said that many breeders have honed in on Bolt d'Oro's physical to best compliment their mares.

“The breeders are so smart and they want to breed a really strong-hipped mare with a good hind leg to him,” he noted. ” We were happy to see him getting strong-hipped horses, but with Bolt's leg and they stand over some ground. The breeders are very happy with what they got, the response has been great so far and I think they are going to be rewarded very well.”

“I look for him to have an absolutely great sales season,” Toothaker said. “Most everyone we run into is very excited about these Bolts. This July sale will be a great start for him. We're very excited to kick off sales season and then head to Saratoga with a great group.”