Home » Archive » Europe » Bobby Flay: 'Royal Ascot is the Pinnacle for Me'

Bobby Flay: 'Royal Ascot is the Pinnacle for Me' 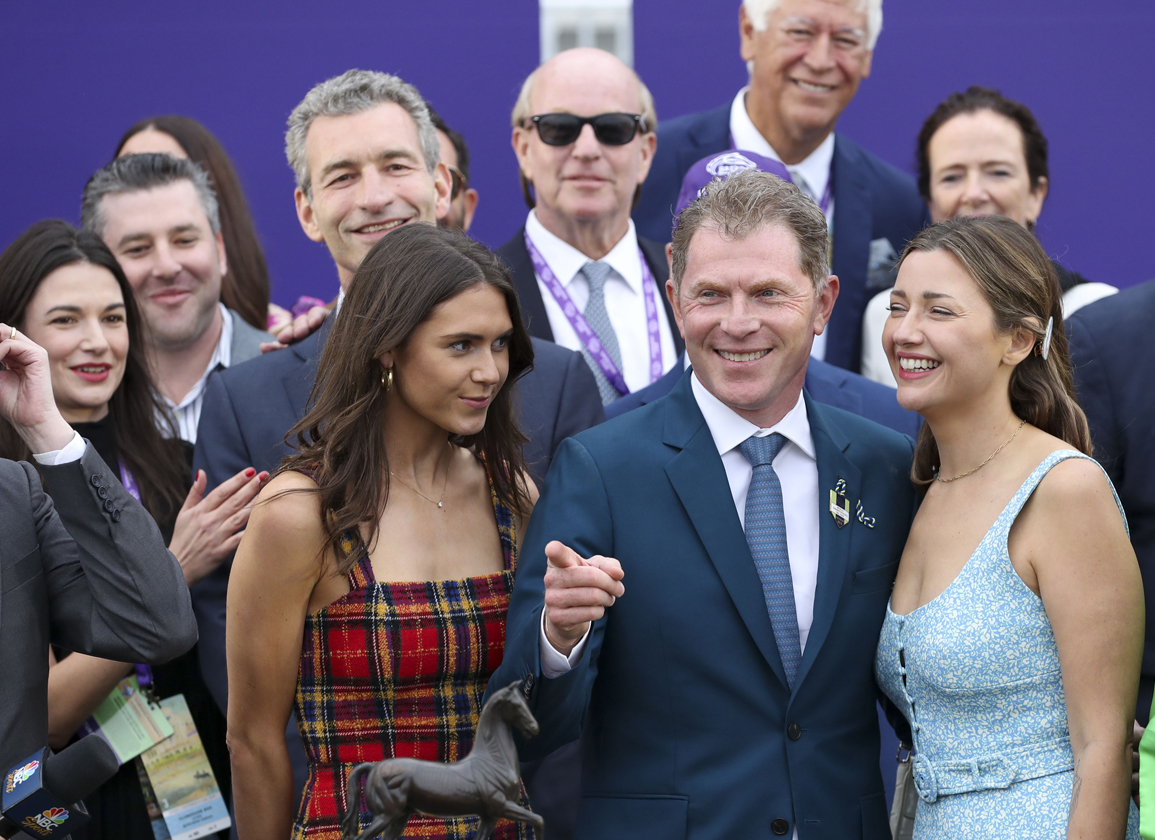 Bobby Flay: “Royal Ascot is the pinnacle for me” | Sportswire

Celebrity chef Bobby Flay is excited to swap his apron for a top hat and tails at Royal Ascot and described his bold bid for G1 Coronation S. glory with Breeders' Cup-winning homebred Pizza Bianca (Fastnet Rock {Aus}) as “an experience of a lifetime.”

The Coronation S. has been the main aim for Pizza Bianca ever since she stormed to victory in the GI Breeders' Cup Juvenile Fillies Turf at Del Mar last November and Flay has said that next week's royal meeting is the pinnacle.

“I feel like I have won already just by participating in a race like this,” the television star told TDN Europe on Thursday. “It's one of the things that I love about this game, being able to participate in big races, and no matter what, we are going to have a great time.

“We have big races at home in our back yard worth a lot of money but Ascot is the experience of a lifetime and we're so excited,” – Bobby Flay

“Royal Ascot is the pinnacle for me. The pageantry of it all, the quality of the horses, the food and beverage, the building itself and the royal family. It has everything that you could possibly want at a horse racing event.”

Flay didn't become one of the most successful owner-breeders in America by simply wanting to take part. He bought White Hot, a half-sister to G1 Derby winner Pour Moi (Ire) (Montjeu {Ire}), for 1.25 million gns out of the 2014 Tattersalls October Book 1 Sale. Pizza Bianca is her first foal.

She has proved an outstanding addition to Flay's broodmare band, which is said to have numbered only 10, with Pizza Bianca flying the flag for the family with that Breeders' Cup success representing an important first for her trainer Christophe Clement.

Flay said, “Christophe is incredibly talented and extremely knowledgeable. He's got a great team and is meticulous. They love what they do and are great communicators. It's been such a fun experience having a horse with him and I was so happy for Christophe to win his first Breeders' Cup race with Pizza Bianca. We have big races at home in our back yard worth a lot of money but Ascot is the experience of a lifetime and we're so excited.”

He added, “Pizza Bianca has an incredibly rich pedigree and it's mostly European. To be able to showcase her talents on the biggest stage in Europe is a privilege. I have 10 mares. The philosophy behind the operation is that we try to breed the best to the best. We try and leave mediocre to the side and everything we breed is of a very high quality.

“My bloodstock agent, James Delahooke, is a bit of a legend in European racing and helped create a lot of the good Juddmonte families. If you look through some of their great horses, James would have picked out the third or the fourth dams in the pedigree, so having somebody who can see into the future is a huge help.”

Flay has surrounded himself with some of the brightest minds in racing in order to give himself a fighting chance of succeeding but he does a lot of the matings himself and selected Fastnet Rock for White Hot, with the resulting foal turning out to be the now famous Pizza Bianca.

He explained, “Fastnet Rock has been an amazing sire in Australia and when he shuttled to Europe he got a lot of good horses over there as well. Galileo might be the best sire of all time but, the problem with him is, he has a lot of sons at stud. When you have a Galileo mare, the choices are not there at the highest end, and when I was looking at what stallion to go with for White Hot, Fastnet Rock just seemed like he would be a really good choice.”

Flay added, “He was a very fast racehorse and I felt like White Hot needed some speed. As everyone knows, 95% of these things are guesswork, but one of the things that I really believe in is, if you have a mare with good blood, it will show up at one point. You don't know when, but if you breed well, she is going to produce something special. I just didn't think it would be with her first foal! White Hot has an Uncle Mo colt yearling and a Not This Time colt foal. She is in foal to Into Mischief so hopefully there is a lot to look forward to.

“I spend a lot of time on matings and have a couple of rules that I follow. I don't go to unproven stallions. I just don't do it. When I think about sires in the United States, I think Curlin, Uncle Mo, Quality Road and Into Mischief–the top of the food chain. Not This Time and Constitution, they are going to take the lead at some point, but I am very careful with my breeding choices.”

Not only has Flay enjoyed a great deal of success with Pizza Bianca in recent times, he remains a shareholder in GIII Pimlico Special S. winner First Captain (Curlin), a horse he bred, and recently bought into GI Belmont S. contender We the People (Constitution).

An unrelenting ability to make good and informed decisions has led to Flay's outstanding run of success, according to Clement, who says he is no such believer in luck.

Clement said, “I am a realist and Bobby is an optimist–and thank God he is an optimist because this is a tough game and he has done very well. When I was an assistant trainer for Luca Cumani, we trained horses for Gerald Leigh, and Bobby Flay will be the next Gerald Leigh.

“He has a small broodmare band, is very disciplined, sells his colts well and keeps his mares in  training.”

The trainer added, “The main thing that makes him successful is that he is amazingly disciplined. He has a wonderful broodmare band and you need to give him credit. Many people have tried to do it but not many have done it as well as he has.

“Bobby has surrounded himself with very good people in his own business and in racing as well. He has bought into some of the top pedigrees and is now involved in racing at the top level.

“I don't believe in luck whatsoever and Bobby is successful because he had a good plan and it's working well.”

Flay's yellow and orange silks will be carried by Pizza Bianca in a race that features Homeless Songs (Ire) (Frankel {GB}), representing Moylgare Stud in Ireland, the Cheveley Park-bred Inspiral (GB) (Frankel {GB}) and a host of Coolmore-bred blue bloods. It may seem daunting, but Flay is relishing the challenge.

He said, “I don't buy a lot of horses because I don't have the resources that some of these people I am competing against have. Some of these people own countries. I mean, they have extreme wealth and can just fire away as they please, but I have to be very clever and save my powder for the moments when something special comes up.

“When White Hot was in the sales, I knew she wasn't going to be cheap, but it's like buying a piece of real estate to me. I would never buy a colt like that. I can't afford to try that. If White Hot was a colt, she'd be worth zero [once she never raced] but, the fact that she's a filly, you still have a chance.

On the race itself, he added, “William Hill has Pizza Bianca at 10-1 but everyone else has her odds at 16-1 so maybe the guys at William Hill took a bet.”

Pizza Bianca is not the only horse that Clement runs at the royal meeting with the rapidly-progressive sprinter Slipstream (More Than Ready) due to line out in the G1 Commonwealth Cup as well.

Speaking about his chances of landing a royal winner at the first attempt at travelling horses to Britain, Clement, who was once based in the United Kingdom, said, “I worked in England for four years as assistant to Luca Cumani and have been lucky enough to train for Her Majesty in America. To have runners at Royal Ascot is a lot of fun and I actually like that they are not favourites.”

He added, “Slipstream was very impressive when he won at Keeneland in April. He has a good mind and has a lot of talent. He is still improving.