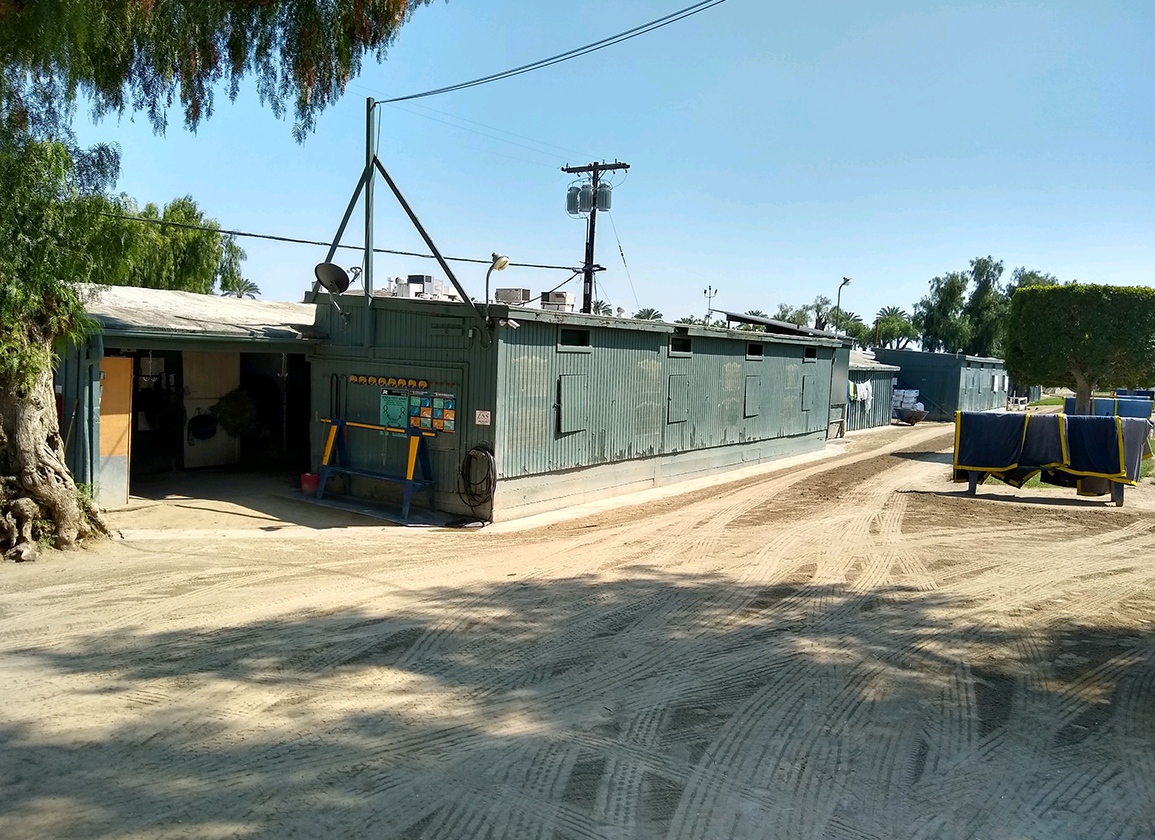 Signage has been removed from Baffert's Santa Anita Barn, as of Friday

The Kentucky Court of Appeals on Friday denied a motion by trainer Bob Baffert and owner Amr Zedan to stay their penalties related to Medina Spirit's betamethasone positive in the 2021 GI Kentucky Derby.

This means the most severe of the sanctions, an under-appeal 90-day suspension imposed on Baffert by the Kentucky Horse Racing Commission (KHRC), will now go into effect as ordered on Monday, Apr. 4.

In accordance with suspension-related regulations in California where Baffert is stabled at Santa Anita Park, signage was already being removed from his barn there as of midday Apr. 1 in advance of the expected transfer of his racing operation.

“Baffert's primary argument that he will suffer 'ruinous' injury concerns the fact that one of the disciplinary sanctions imposed against him is the suspension of his trainer's license for 90 days,” wrote Acting Chief Judge Allison Jones in her 29-page order.

“He explains that the suspension will have the ripple effect of preventing him from working as a trainer anywhere in the United States because of nationwide reciprocity laws and that the regulations of California will require him 'to close his barn, disburse the approximately 100 horses in his care, and lay off nearly 80 employees.' He further asserts that he will lose clients and the opportunity to compete in future races, including the 2022 Triple Crown series of races…

“This Court cannot agree,” Jones continued. “It is true that Baffert cannot regain the 90 days once the suspension is served. However, lost time itself is not sufficient to demonstrate irreparable harm.”

One of Baffert's attorneys, Clark Brewster, told TDN via phone that “It's very difficult under these circumstances to have all these harsh kind of penalties put in place before you even have a reasonable opportunity for people to apply the rules.”

In the overall picture, Brewster added, Baffert's legal fight to clear his name is “just getting started.”

Nevertheless, Brewster added, the Hall-of-Fame trainer has to be practical in terms of what will transpire in the near term.

“We have to act in response to what the ruling is, and we'll look at our alternatives. I mean, this is a sad day when this happens in the industry [and] the regulators not only permit it, but are engaged in doing this.”

Asked if the Baffert legal team has plans for any last-gasp legal action before Monday that could keep the suspension from going into effect, Brewster said this:

“I think at this point, we have to consider that that procedural issue hand has been, for the most part, played. And now it's a matter of–it's like someone has accused you of something, and now they're going to start making you do the prison sentence before you even have a trial. It's so against every jurisprudential principle that we have. And it's unprecedented–truly unprecedented–in Kentucky. None of the regulators have ever heard tell of [the KHRC not granting a stay while an appeals process plays out]. But yet, they were engaged in doing it.”

Brewster told TDN he was not privy to any logistics related to the transfer of Baffert's stock to other trainers beyond what has already been reported about his Derby contenders.

“I just read the ruling. I haven't talked with my co-counsel yet, and I certainly haven't talked to Bob,” Brewster said. “But here's the deal with Bob: Whatever the rules are, Bob is going to do it, okay? That's what he's done his whole life, so if this is what needs to be done, he's the kind of guy that says, “Okay, let me do what I need to do.' So we'll just deal with it in a very direct and straightforward manner.”

Devils in the details?

It took the Appeals Court eight days to issue its order that swatted down Baffert and Zedan's request for a stay. But the case has been percolating in the Kentucky court system for over a month.

On Feb. 21, the KHRC issued Medina Spirit's dirty-test rulings against Baffert and Zedan, who  then appealed at the commission level. The appeal was granted, but on Feb. 25 a seemingly routine request for a stay of the penalties while the appeal played out was denied by the KHRC's executive director, Marc Guilfoil. So Baffert and Zedan took the matter to Franklin Circuit Court Feb. 28.

On Mar. 2, the Franklin judge said he would hold off on a full court hearing to decide the stay and/or injunction until after the full KHRC board had a chance to vote on the stay instead of just relying on the executive director's say-so.

On Mar. 4, the KHRC board voted 10-0 to deny the stays of penalties in accordance with the decision Guilfoil had already made.

Then on Mar. 21, the Franklin judge denied the request to force the KHRC to impose any sort of stay. Baffert and Zedan then decided to kick the Franklin court's denial up to the higher Court of Appeals on Mar. 24.

In her Apr. 1 order, Jones wrote that “the Court concludes that Jefferson County was the proper venue in which to challenge the Racing Commission's denial of the requested stays…. [A state law that covers legal venues] does not prohibit filing in Franklin Circuit Court, and had the race at issue taken place in Franklin County, it would have been the proper venue for this action…”

But, Jones concluded, before ruling on the merits of the case, she was “satisfied that both the circuit court and this Court have subject matter jurisdiction.”

Yet the judge also questioned three other procedural matters. Two dealt with the Baffert/Zedan court filings. The third had to do with the KHRC rulings.

Jones wrote that Baffert and Zedan's Feb. 28 filing in the Franklin court represented an “unusual step” because they were acting only on the KHRC executive director's letter that said no stay would be granted and not on the vote by the KHRC board, which amounted to “filing an appeal of the Racing Commission's not-yet-issued ruling.”

Brewster explained to TDN “That was a calculated decision just because of the timing involved. The suspension would require Bob to disband his stable, and so out of an abundance of caution the filing was made in the court before the commission actually assembled and made a ruling.”

Separately, the judge also made a point of noting how one of the KHRC rulings was issued to “Owner Amr F. Zedan” while court filings instead listed “Zedan Racing Stables, Inc.” as the entity requesting legal relief.

“It is unclear to this Court the exact ownership of Medina Spirit,” Jones wrote. “What is clear, however, is that [state law] allows '[a] person who is denied [a stay] by the racing commission' to file an appeal of the denial of the request for a stay in circuit court…. The Racing Commission's denials were directed to Mr. Zedan, not Zedan Racing Stables, [which is] a distinct legal entity that is separate from its shareholders. If Mr. Zedan desires a stay or injunction, he must prosecute the appeal himself….

“Moreover, there is no dispute that Medina Spirit died in December 2021 so the penalty will not have any effect on the horse's value or ability to compete in future races. The only tangible effect is that Mr. Zedan has been ordered to forfeit the purse money. The loss of money, even if a substantial sum, has never been held to rise to the level of irreparable injury.”

The judge also questioned how the KHRC wrote up its rulings: “Both written rulings issued by the Racing Stewards list the track at issue as 'Turfway Park.' The Court presumes these are merely typographical errors as it is undisputed that the 2021 Kentucky Derby was run at Churchill Downs Racetrack in Louisville, Kentucky.”

“Lastly, the Court is acutely aware that in considering whether to grant an injunction, even in the limited the context of an emergency motion, it should balance the equities,” Jones wrote.

“The Racing Commission has steadfastly and vigorously maintained that a stay, even a temporary one, is not appropriate, given Baffert's repeated violations The Racing Commission is statutorily required to 'promote public confidence in the industry [by providing] assurance that the races are fair and genuinely competitive.'

“The Racing Commission, and this Court in turn, cannot focus solely on the penalty as a punishment to Baffert that will prove unjustified if he is fully exonerated at the conclusion of [his] appeal. The penalty must also be viewed as necessary to protect the public and the equines in Baffert's charge in the event he is not exonerated. Those interests are compelling and have

been recognized by the General Assembly as vitally important to this Commonwealth.

“With respect to the emergency stay, the Court cannot conclude that the harms Baffert alleges he will suffer, which are primarily economic in nature, outweigh the public protection concerns asserted by the Racing Commission and recognized as a matter of public policy by the General Assembly,” Jones concluded.

Brewster summed up his take on that point in a different fashion.

“A lot of times the headlines are made along the way, and when a guy's been vindicated it's on page six,” Brewster said. “But we'll have our time, and we'll have an opportunity to present not only the evidence, but the rules. And I keep telling Bob that will come, it's inevitable, and we look forward to that.”