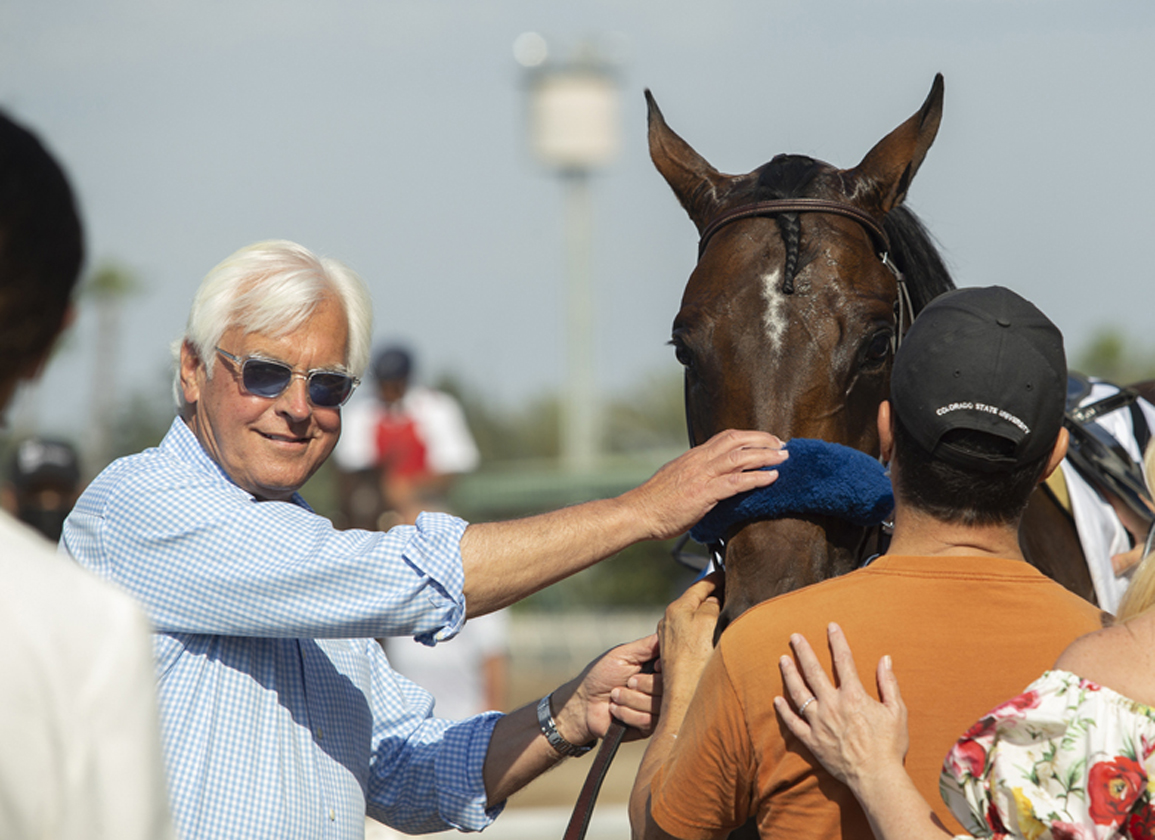 A Kentucky judge on Monday denied a request for a stay and/or a temporary injunction that would have kept trainer Bob Baffert's and owner Amr Zedan's penalties from being enforced while the Kentucky Horse Racing Commission (KHRC) appeals process plays out for rulings related to Medina Spirit's betamethasone-positive disqualification from the 2021 GI Kentucky Derby.

Judge Thomas Wingate of Franklin Circuit Court did, however, keep Baffert's 90-day suspension and $7,500 fine and Zedan's forfeiture of the Derby purse winnings from going into effect for two more weeks so that they could muster another legal challenge in a Kentucky appeals court by amending their original complaint if they so choose.

In practical terms, the court-ordered delay also affords Baffert time to take care of business related to the transfer of his nearly 100-horse, California-based racing stable so he is in compliance with the terms of the KHRC's suspension, which is respected as a reciprocal ruling in all North American racing jurisdictions.

“The Court understands the gravity of this ruling on Plaintiffs,” Wingate wrote in the Mar. 21 order. “Accordingly, the Court will alleviate this impact by staying the implementation and enforcement of [the stewards' rulings] until April 4, 2022. In the interim, Plaintiffs may seek emergency relief with the Kentucky Court of Appeals and take any necessary action to comply with the ramifications of the penalties imposed. However, absent relief from a reviewing court, the penalties imposed by [the stewards' rulings] shall take effect on April 4, 2022.”

That Apr. 4 effective date is two days after the GI Arkansas Derby, an important Kentucky Derby prep race to which Baffert has nominees. Another major stakes that annually attracts Baffert's top sophomores, the GI Santa Anita Derby, is coming up Apr. 9 and would fall within the penalty period. If Baffert can't get a different appeals court judge to enforce a stay or impose an injunction, it would mean his suspension would run through July 3. That time period covers the entire Triple Crown season, but Baffert could be back in action in time for the lucrative meets at Saratoga and Del Mar.

“Baffert claims that, given his unique profession, this suspension will destroy his business, require him to vacate his barns, remove his signage, transfer his horses to other trainers, and lay off employees,” Wingate wrote. “On the outset, the Court is confident that Baffert's career will not be destroyed by this 90-day suspension. Baffert's track record speaks for itself. Nevertheless, Baffert's claimed injuries again generally relate to economic harm, which is not irreparable under Kentucky law. Baffert has failed to plead harm that would be irreparable.”

Wingate explained in his order that as a prerequisite to injunctive relief, Kentucky courts require adherence to the “Maupin standard.” That legal precedent requires plaintiffs “to present a substantial question as to the merits, demonstrate a probability of immediate and irreparable injury, and to persuade the Court that the equities balance in favor of issuance.”

Wingate wrote that failing to satisfy any one of those requirements keeps the court from granting an injunction. But, he added, Baffert and Zedan whiffed on all of them.

“This is a matter of first impression,” Wingate wrote. “The Court and the parties are unaware of [the state law that deals with licensees being allowed to appeal KHRC stay denials in court] ever being exercised. There is a general consensus that the Executive Director and/or the KHRC have never denied a request for a stay for a violation. Despite this fact, the Court finds that requests for stays must be evaluated on a case-by-case basis.

“Accordingly, the Court cannot adopt a blanket rule that all requests for stays must be [automatically] granted. In fact, said rule would violate the intent of [the above-cited law],” Wingate wrote. “The statute's existence and language openly suggest that a request for a stay should be evaluated on a case-by-case basis. Otherwise, logically, the General Assembly would have written the statute to provide for an automatic stay and would not have prescribed numerous avenues to appeal the denial of a stay.”

Under that Kentucky law, Wingate wrote, “the role of this Court's review is not to make an independent decision. By statute, [KHRC executive director Marc] Guilfoil was charged with determining whether good cause existed to issue the requested stays. Guilfoil provided the reasoning behind his decision to the Court on March 17, 2022, and the Court holds that Guilfoil did not act arbitrarily or abuse his discretion in denying Plaintiffs' requests for stays. Guilfoil cited the role of the KHRC, as crafted by the General Assembly, and Baffert's four medication positives in the past 365 days.”

How we got to this point…

On May 1, 2021, Medina Spirit crossed the finish line first in the Kentucky Derby. Subsequent split-sample testing detected an overage of betamethasone. Although no KHRC ruling was immediately issued, the gaming corporation that owns Churchill Downs quickly barred Baffert from competing at its portfolio of tracks for two years, and none of his horses have been allowed to accrue 2022 Derby qualifying points to get into the race that the Hall of Fame trainer has won seven times. Baffert has been fighting that matter in federal court.

Baffert was also barred from competing at the New York Racing Association (NYRA)'s tracks, but in July he secured a preliminary injunction in a different federal court that still allows him to race there pending the final resolution of a NYRA exclusionary hearing that took place in January 2022.

The KHRC finally held its hearing on Medina Spirit's dirty test on Feb. 14, 2022, and issued the rulings against Baffert and Zedan a week later. When a stay request filed with the KHRC was denied by Guilfoil Feb. 25, Baffert and Zedan took the matter to court Feb. 28.

On Mar. 2, Wingate said he would hold off on a full hearing for the matter until after the full KHRC board had a chance to vote on the stay. On Mar. 4, the KHRC voted 10-0 Mar. 4 to deny the stays of penalties in accordance with the decision Guilfoil had already made.

In the aftermath of that vote, one of Baffert's attorneys, Clark Brewster, told TDN that courts generally take a hard look at situations in which an agency like the KHRC is “the investigator, the prosecutor, the judge and the jury,” and Brewster indicated that a judge might be more inclined to grant a stay.

But Wingate–whose Franklin Circuit Court generally has a reputation for standing up to overreaching state agencies, particularly the KHRC–didn't see it that way based on Monday's order.

“A temporary injunction is an extraordinary remedy,” Wingate wrote. “The purpose of a temporary injunction is to preserve the status quo for a party that presents a substantial question as to the merits and will likely suffer immediate and irreparable harm absent court intervention.”
Wingate said the plaintiffs–Baffert in particular–couldn't prove that.

The details of the court order…

“First, Baffert contends that sports are unique and sporting events, such as the Triple Crown and graded stakes races, cannot be replayed after the fact,” Wingate wrote. “Baffert cites a string of non-binding cases from outside jurisdictions where athletes were granted injunctive relief for said reason.

“Athletes have a finite period of eligibility or peak performance,” Wingate continued. “However, Baffert is not an athlete. He is a trainer, much more akin to a coach. Unlike certain athletes whose careers are subject to a small window of eligibility or period of peak performance, Baffert's career has spanned decades and will continue following this brief suspension. In fact, Baffert has expressed his intent to continue in his chosen profession. The horses under Baffert's care–the athletes–do possess a finite window of eligibly and peak performance.

“However, those horses can still race. Any harm that Baffert will suffer from not participating in the 2022 Triple Crown or other races during his period of suspension will result in monetary loss.”

In explaining his rationale on other points that the plaintiffs raised related to their likelihood of prevailing on merit arguments, Wingate, somewhat surprisingly, did not give credence to any of Baffert and Zedan's contentions.

At a different point in the order, Wingate wrote that “Plaintiffs believe that the proper time for any penalties to take effect is after all avenues of appeal have been exhausted. Plaintiffs, particularly Baffert, believe that harm is immeasurable because Baffert cannot get back the races he has missed during his suspension.

“The KHRC contends that participation in racing is a privilege and not a right and states that Plaintiffs are asking the Court to permit them to participate in the industry without having to adhere to the conditions of licensure that Plaintiffs agreed to abide by.

“Similarly, the KHRC reasons that the public is entitled to protection from the continual danger presented by the drugging of horses until this matter can be fully resolved,” Wingate wrote. “The Court has considered the equities involved and of highest importance to the Court, and surely to all involved in this litigation, is the public interest in protecting the horses racing in the Commonwealth.”

Baffert's lead attorney, W. Craig Robertson III, did not reply to a TDN request for comment in time for deadline for this story.
Beyond the Court of Appeals mentioned in Wingate's order, trying to get the Kentucky Supreme Court to hear the case could be another option.