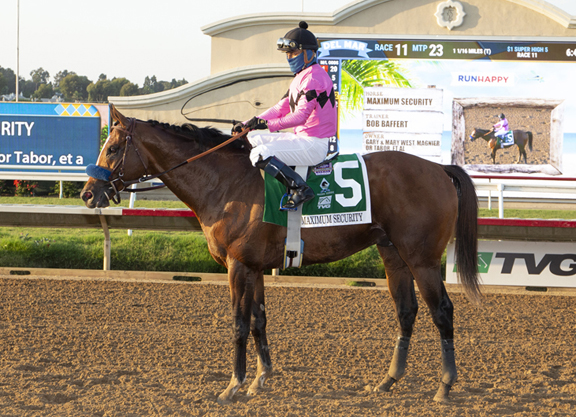 Maximum Security makes his first appearance at the Breeders' Cup and is one of an imposing trio in the $6-million GI Breeders' Cup Classic for trainer Bob Baffert. Winner of the GI TVG Pacific Classic in August, the Gary and Mary West runner was second to stablemate and 'TDN Rising Star' Improbable (City Zip) in the GI Awesome Again S. Authentic will try to become the first 3-year-old to win the featured event since the Baffert-trained Arrogate (Unbridled's Song) in 2016 and makes his first appearance since finishing second to Swiss Skydiver at Old Hilltop Oct. 3. The latter was also entered for the Classic by trainer Ken McPeek, but has a first preference for the GI Longines Breeders' Cup Distaff.

Monomoy Girl (Tapizar) looks to double up in the latter event, having defeated her elders two years ago. She faces a maximum field of 11, though Harvey's Lil Goil (American Pharoah), last-out winner of the GI Queen Elizabeth II Challenge Cup on the grass, has a first preference for the GI Maker's Mark Breeders' Cup Filly & Mare Turf.

Of the 11 pre-entered horses for the $4-million GI Longines Breeders' Cup Turf, six are from overseas, headed by Ballydoyle's outstanding mare Magical (Ire) (Galileo {Ire}). Trainer Aidan O'Brien is also set to be represented by G1 Grand Prix de Paris winner Mogul (GB) (Galileo {Ire}), while John Gosden also has a pair entered, including G1 Prince of Wales's S. hero Lord North (Ire) (Dubawi {Ire}). Mehdaayih (GB) (Frankel {GB}) holds an entry for the turf, but is cross-entered with a first preference against her peers in the Filly & Mare Turf.

The GI FanDuel Breeders' Cup Mile also has significant European flair, with five overseas-based runners among the main body of 14 and another two among the four horses that were not selected into the field. European 3-year-old form is represented by G1 Irish 2000 Guineas hero Siskin (First Defence) as well as Kameko (Kitten's Joy), victorious in the G1 English 2000 Guineas in his first start of the season in June and a latest winner of the G2 Shadwell Joel S. over a mile Sept. 25. The home team is headed by defending champion Uni (GB) (More Than Ready), one of three entered by trainer Chad Brown, who will also send out Digital Age (GB) (Invincible Spirit {Ire}) and Raging Bull (Fr) (Dark Angel {Ire}), both Grade I winners this season.

Championship Saturday kicks off with the GI Breeders' Cup Filly & Mare Sprint for which 'Rising Star' Gamine (Into Mischief) figures to go favored cutting back to one turn. Top 3-year-old filly sprinter Frank's Rockette (Into Mischief) is likely to pass the Filly & Mare Sprint in favor of a start against the boys in the six-furlong GI Breeders' Cup Sprint. There she will likely face Vekoma (Candy Ride {Arg}), who also has a second preference in the GI Dirt Mile.