Authentic Named 2020 Horse of the Year 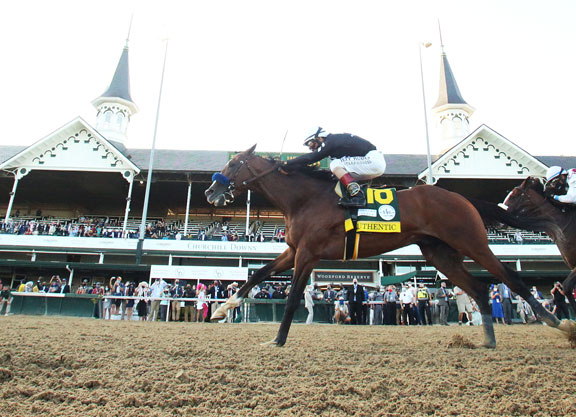 We watched him grow up before our eyes.

Authentic (Into Mischief), freakishly talented, but prone to–well–mischievous behavior during the early part of 2020, was a finished product by year's end and his on-track accomplishments landed him Horse of the Year and champion 3-year-old honors at Thursday's Eclipse Awards.

The ceremonies were held virtually, fittingly enough and among other locations, at Spendthrift Farm, who campaigned the Peter Blum-bred son of Flawless (Mr. Greeley) in partnership with the 5300-some micro-share holders of MyRaceHorse Stable, Madaket Stables LLC and Starlight Racing. And Authentic was virtually perfect in 2020, sometimes almost in spite of himself. Sure, he was devastating in the GIII Sham S. in January, even as he negotiated the final furlong like a drunken soldier, and his talent was such that he overcame a stutter-step start to take the GII San Felipe S. in March. As the pandemic tightened its grip, California racing grinded to a halt, forcing connections to hit the pause button on Authentic's season. Honor A. P. (Honor Code) made him pay for a slow start in the GI Santa Anita Derby in June, but he atoned in the GI Haskell S. the following month, looking a winner every step until he returned to his single-minded ways late and barely scraped in.

The takeaway? Surely Authentic would find that 10th furlong of the GI Kentucky Derby a step too far, but, with Hall of Famer John Velazquez at the controls for the first time (Smith elected to stick with the Santa Anita Derby winner), Authentic took them every step at Churchill at juicy odds of 42-5, proving that his all-conquering sire's progeny could indeed stay a Classic distance.

It would be difficult to begrudge him his defeat at the hands of a refuse-to-lose champion Swiss Skydiver (Daredevil) on the square in the GI Preakness S. in early October, but those that remained in his corner were rewarded with an overlaid 4.20-1 in the Nov. 7 GI Longines Breeders' Cup Classic, when Authentic treated a classy field including Eclipse Award winner Improbable (City Zip), former champion Maximum Security (New Year's Day) and GI Belmont S. and Eclipse Award runner-up Tiz the Law (Consititution) to a 2 1/4-length beating.

“This is a big deal for me. I wish all owners could have the same experience and I'm happy to be a part of this,” said Spendthrift owner B. Wayne Hughes. “I think his [stud] career is going to be great. But who knows, God's in charge of that.”

Authentic was one of two Eclipse winners Thursday evening for Into Mischief and becomes the third son of Into Mischief to stand at Spendthrift, joining Goldencents and Maximus Mischief. Authentic hails from the female family of Grade I winners Reynaldothewizard, Seventh Street, American Gal and is bred on a cross over Gone West-line mares responsible for Into Mischief's GISW Mia Mischief and other graded winners Engage, Mischievous Alex, Sombeyay and Strict Compliance.

Michael Lund's 'TDN Rising Star' Gamine (Into Mischief) was something of a lightning rod in 2020, but she possessed arguably the most raw ability of any horse in training and while she finished a distant runner-up to Swiss Skydiver in the 3-year-old filly category, she easily outdistanced Serengeti Empress (Alternation) to take home the Eclipse for champion female sprinter. The $220,000 Keeneland September yearling turned $1.8-million Fasig-Tipton Midlantic topper became the second straight daughter of Into Mischief to both win the GI Breeders' Cup Filly & Mare Sprint en route to a championship following on the exploits of Covfefe in 2019.

Trainer Bob Baffert had his hands on a third Eclipse winner for 2020 in the form of 'TDN Rising Star' Improbable (City Zip). Denied a potential Horse of the Year crown by his stablemate on the first Saturday in November, the burly chestnut had a phenomenal season of his own, with victories in the GI Gold Cup at Santa Anita, GI Whitney S. and GI Awesome Again S. Knicks Go (Paynter) also received a smattering of first-place votes and has since returned to win the GI Pegasus World Cup Invitational.

It was a banner season for trainer Brad Cox, whose four winners on Breeders' Cup weekend helped secure for him his first statuette as America's Outstanding Trainer.

'TDN Rising Star' Essential Quality (Tapit) did his part, ripping through his competition in three starts and clinching the Eclipse Award as champion 2-year-old male with a sizzling finish in the GI Breeders' Cup Juvenile. Monomoy Girl (Tapizar) won her second Eclipse Award in the last three years, adding to her 3-year-old filly championship with the 2020 Eclipse as champion older female. Purchased by Spendthrift for $9.5 million at Fasig-Tipton November, the chestnut is nearing her 6-year-old debut.

Vequist (Nyquist) provided her sire a champion from his very first crop to the races, securing the Eclipse as champion 2-year-old filly on the strength of victories in the GI Spinaway S. in September before turning the tables on GI Frizette S. winner Dayoutoftheoffice (Into Mischief) in the GI Breeders' Cup Juvenile Fillies.

Channel Maker (English Channel) capped a very productive season with a third in the GI Breeders' Cup Turf and proved a handy winner of the Eclipse Award as champion turf male. The soft-ground loving 6-year-old got underfoot conditions to suit when racing away to a 5 3/4-length victory in Saratoga's GI Sword Dancer Invitational S. in August, but the going was substantially quicker when he led past every pole to take out the GI Joe Hirsch Turf Classic Invitational ahead of his Breeders' Cup effort. He is set to represent the U.S. in the $1-million Middle Distance Turf Cup in Saudi Arabia next month.

A Couple of Tighter Contests…

The male sprint category was expected to come down to a choice between the horse with the more complete campaign versus a more brilliant and statistically faster runner whose campaign was truncated. In the end, the veteran Whitmore (Pleasantly Perfect)–the GI Breeders' Cup Sprint winner–got the nod over Vekoma (Candy Ride {Arg}), the GI Carter H. and GI Met Mile hero who was forced to miss the second half of the season. Whitmore received 132 first-place votes to Vekoma's 83.

The evening's most hotly contested championship was the turf female division. For the third straight year and for the fourth time in six years, 'TDN Rising Star' Rushing Fall (More Than Ready) gave trainer Chad Brown another Eclipse Award winner in the category. But it was a razor-thin battle, as Rushing Fall–who sold for $5.5 million at FTKNOV–got just the better of GI Breeders' Cup Turf winner Tarnawa (Ire) (Shamardal). The final count of first-place votes was 115-106.

Media Eclipse Awards were announced earlier this month. Among the winners were the TDN's Joe Bianca and Patty Wolfe in the 'Audio/Multimedia Internet' category for a piece written and narrated by Bianca and produced by Wolfe entitled “To Hell and Back: Belmont Marks a Deserved Triumph for New York City.”