As Discussion Turns to Bisphosphonates, Viola Commits $500K to Research 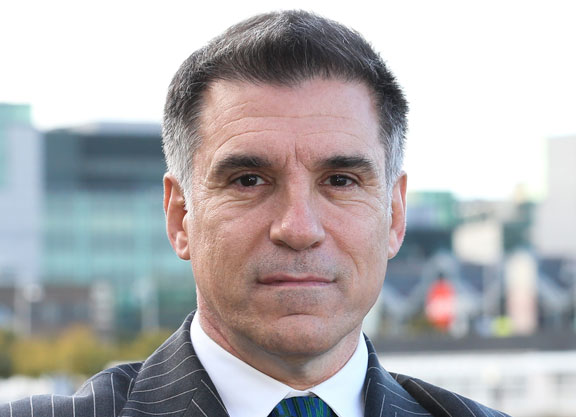 The fallout from events still unfolding at Santa Anita have re-sparked the fires simmering under a number of horse welfare issues. Few, however, have galvanized such a swift phalanx of action as that of bisphosphonates–drugs used in humans to tackle degenerative bones diseases like osteoporosis. Their use in racehorses, however, has proven controversial.

On Thursday, prominent Kentucky Derby-winning owner, Vincent “Vinnie” Viola, committed $500,000 towards vital research behind these drugs and a better system of detection, according to Terry Finley, founder and president of West Point Thoroughbreds. “He is absolutely laser-focused on these issues,” said Finley of Viola's pledge, adding that Viola is challenging other owners to “stamp this out, and stamp it out right away. He talks the talk, and he also walks the walk.”

In 2014, the Food and Drug Administration (FDA) approved the use of two bisphosphonates–Tiludronate (Tildren) and Clodronate (Osphos)–in horses four and older to help control the clinical symptoms associated with navicular syndrome. But many in the industry are concerned about the off-label use of these drugs, especially in young horses, including those being prepared for the sales. That's because, rather than strengthening bones as intended, misuse of these drugs could make them weaker, more susceptible to fractures.

According to Finley, a group of individuals and organizations are also in the process of drafting a letter to be sent to the managing partners of veterinary clinics servicing racehorses around the country, appealing to veterinarians to discontinue use of these drugs on horses less than four years of age.

“Call it what you will, an appeal, a request, a demand, they've got to step up. I know the vast majority of vets want this drug to be used the right way on horses who are 4-year-olds and older. They have taken an oath to do right by the horse. It's very clear that the administration of these drugs to yearlings and two-year-olds isn't doing right by the horse,” said Finley, who added that it took Viola “30 seconds to decide that he was going to be a major supporter of this effort.”

California Horse Racing Board Executive Director Rick Arthur said there are “two key points” to bisphosphonates. The first? They can act as an analgesic for bone pain. The second? Bisphosphonates are toxic to certain cells vital to bone re-growth. “This means the normal bone repair process is inhibited,” said Arthur.

Bisphosphonates are currently unregulated in the U.S., though the TDN reported Wednesday that the Mid-Atlantic region will propose a partial ban of these drugs. In comparison, the British Horseracing Authority (BHA) implemented in 2017 a 30-day stand-down period from racing following the administration of any bisphosphonate. What's more, if a horse under the age of three years and six months is administered therapeutic bisphosphonates, they “will not be qualified to run under the BHA Rules of Racing at any point in its life,” the rules state.

These drugs, however, are difficult to regulate. And part of the conundrum is that too little is currently known about how long they remain in the horse's system. “We have the ability to detect it in blood and urine up to about 100 days post administration now,” said Mary Scollay, equine medical director of the Kentucky Horse Racing Commission. “But we don't know how that correlates to duration of effect,” she added.

Another unknown? The length of time that bisphosphonates stay in the bone–potentially years–and how they behave for that duration. Then there's the question of how to look for it.

“It's not clear that we've got a terribly reliable method for detecting it in the bone,” said Scollay, who added that acquiring bone samples from live horses is clearly not an option. Most of the research thus far has been from “fracture fragments” through injured horses, said Scollay. “And we have not detected bisphosphonates. But again, are we looking in the right place? There's a lot we don't know yet.”

Indeed, there's still so much unknown about the way bisphosphonates affect the physiology of the racehorse, with the bulk of the drug research done on humans and on animals other than horses. Nevertheless, we do know enough to support the fears of a growing number of leading industry figures.

What are they, and how do they work?…

In order to understand how bisphosphonates work, it's important to know that bones are (or should be) in a continuous state of regrowth and renewal. This dynamic, adaptive process maintains the bone's delicate balance of rigidity and flexibility. And at the crux of this process are cells called osteoclasts and osteoblasts.

Osteoclasts dissolve, break down and absorb–as part of a process called resorption–damaged or weakened bone tissue at the site of a fracture. Osteoblasts follow behind, adding new bone to fill and mineralize the holes left by the osteoclasts. This is the fundamental, on-going mechanism at play, from large fractures down to the microfractures sustained by horses and humans on a daily basis.

When it comes to degenerative bone diseases, bisphosphonates inhibit the work that osteoclasts do, thereby preventing the breakdown of bone tissue–a useful tool for tackling osteoporosis.

But problems may arise if bisphosphonates are used to treat, say, sesamoiditis in a yearling being prepared for the sales. While an X-ray may give the outward impression that the bone is healthy, in actual fact, the bone tissue could be made up of dead material that's never cleaned away in the usual manner–what experts liken to a ticking time bomb, when that potentially compromised bone is put under the duress of training and racing.

Bisphosphonates also appear to stunt healing. Veterinarian Dr. Larry Bramlage has been outspoken about the threats that these drugs pose to racehorse populations. In this article in the Paulick Report, Bramlage explains that fractures typically show improvement after only a couple of months. But in horses treated with bisphosphonates, original fractures are sometimes visible as much as 14 months after injury, he said.

On top of that, studies have shown that that, in cases where bisphosphonates have effectively treated lameness, it's difficult to know just how much of the improvement was due to the drug's pain-killing effect. Experts say analgesia post-treatment can last up to a couple of weeks.

Use in older horses…

Nevertheless, bisphosphonates can be of benefit, especially to older horses suffering navicular disease, back pain and osteoarthritis. California-based practicing veterinarian Ryan Carpenter said he uses the drug on horses only in light training, primarily on sore shins, and never close to a race, he said.

“If you use a small dose in a specific area extremely infrequently, I believe it's a safe tool that we have in our tool box,” he said. But, “if you want to just start giving all horses bisphosphonates in systemic or full-body doses, I think you're going to get into some serious trouble,” Carpenter added. “We've seen people who have done that, and they've regretted the decisions they've made.”

Carpenter said that Tildren and Osphos, non-nitrogenous bisphosphonates, aren't as powerful as their nitrogenous cousins, and he questions whether they're as potent as is largely suspected.

“You have to have the osteoclastic signal for the osteoblast to follow, to lay down new bone,” said Carpenter. “That's true. But where I think we've failed with these bisphosphonates is that we assume that it's an on and off switch-either they're all on, or they're all off.”

Nevertheless, “because it's got such a negative press, I have a very direct conversation with the owner or the trainer as to why I'm doing it and why I think it's a good case,” Carpenter said, who added that his approach to the drug has become increasingly more conservative over the years.

As to how ubiquitously these drugs are used throughout the industry, the answer appears to be largely anecdotal.

“My responsibility immediately is to try to figure out, or at least try to educate our membership as to 'hey, nobody's sure what the potential side effects are of these drugs, and if you're using them, you need to educate yourself. As do all of us,'” Lyster added. “It's a little bit of a fact-finding mission for me, to be honest, and the CBA board.”

Niall Brennan is a prominent sales consignor based in Florida. He said that he and his veterinarian, Jonathan McLellan, with Florida Equine Veterinary Associates, were alerted to the possible dangers of bisphosphonate use in young horses a few years ago, and as such, have avoided using them on the horses he prepares for the sales.

“Now that it's out there, and we can all agree that it should be banned [for off-label usage], why did it get to this stage?” Brennan said. “Do you blame the pharmaceutical companies for not being more pro-active in pointing out what it should be used for? Do you point to the vets who were allowing their clients to use it? I think there's blame to be shared. The bottom line is, when there's a lot of money at stake, some people tend to check their ethics at the door, and that's what it really comes down to.”

As to the research component of the issue, Dionne Benson, executive director and chief operating officer at the Racing Medication and Testing Consortium (RMTC), admitted that “we haven't had any meaningful research breakthroughs [in recent years], and it's actually gotten to the point where it's quite frustrating.”

As such, “the RMTC is working with the Grayson-Jockey Club Foundation and the [American Association of Equine Practitioners], and we're assembling a group to essentially put together the questions we need answered,” Benson added.

The unanswered questions, said Benson, include the following: What are the pharmacodynamics of bisphosphonates? Exactly how long does the analgesia last? If we give it to 2-year-olds and we exercise them, do we see any difference in uptake? “And in the event we can take a sample from the bone, will we be able to find it?” Benson said.

“We need to see how this affects horses when they get it when they're young, when they're exercised. We need something that's really relevant,” Benson said. “It's certainly going to take more than one project, and they're not going to be short-term projects, but it's gotten to the point where we simply have to do it.”