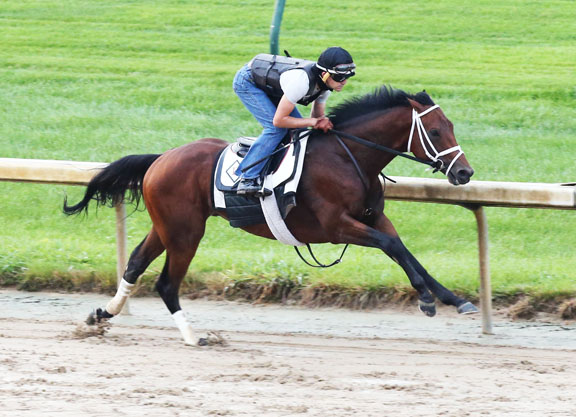 Bruce Lundsford’s Art Collector (Bernardini), winner of the GII Toyota Blue Grass S. in his latest start, worked over a muddy Churchill Downs track Saturday morning. Trained by Tom Drury, the colt carved out fractions of :12.80 and :24.60 before galloping out five furlongs in 1:01.20 and six panels in 1:14.80.

“It’s so nice to have a horse who is versatile and can really run over any surface,” said Drury. “He did everything very easily this morning and it was really just a perfect work. We are still taking things one day at a time. We just have to get there and we’re keeping our fingers crossed.”

“I was very happy with how [Enforceable] worked this morning,” said 21-year-old Declan Carroll, whose father, David, oversees trainer Mark Casse’s Churchill Downs string. “He did everything in stride. I was just the pilot.”

Highlighting the fairer set Saturday morning, Peter Callahan’s Swiss Skydiver (Daredevil) worked five furlongs in 1:01 in preparation for the Aug. 15 GI Alabama S. at Saratoga. The chestnut, who was runner-up behind Art Collector in the Blue Grass last month, carved out intermediate fractions of :13.40, :26.40 and :38.20 before rounding out the move in 1:14.20 for six furlongs, according to Churchill Downs clocker John Nichols.

“She worked really good and handled the muddy surface well,” Brian Hernandez Jr., who was aboard for the work. “She’s a very talented filly as we saw in the Blue Grass how well she handled running against the boys. She cruised along out there this morning.”