Home » Archive » Shared News Europe » Arqana August: Back and Better Than Ever

Arqana August: Back and Better Than Ever 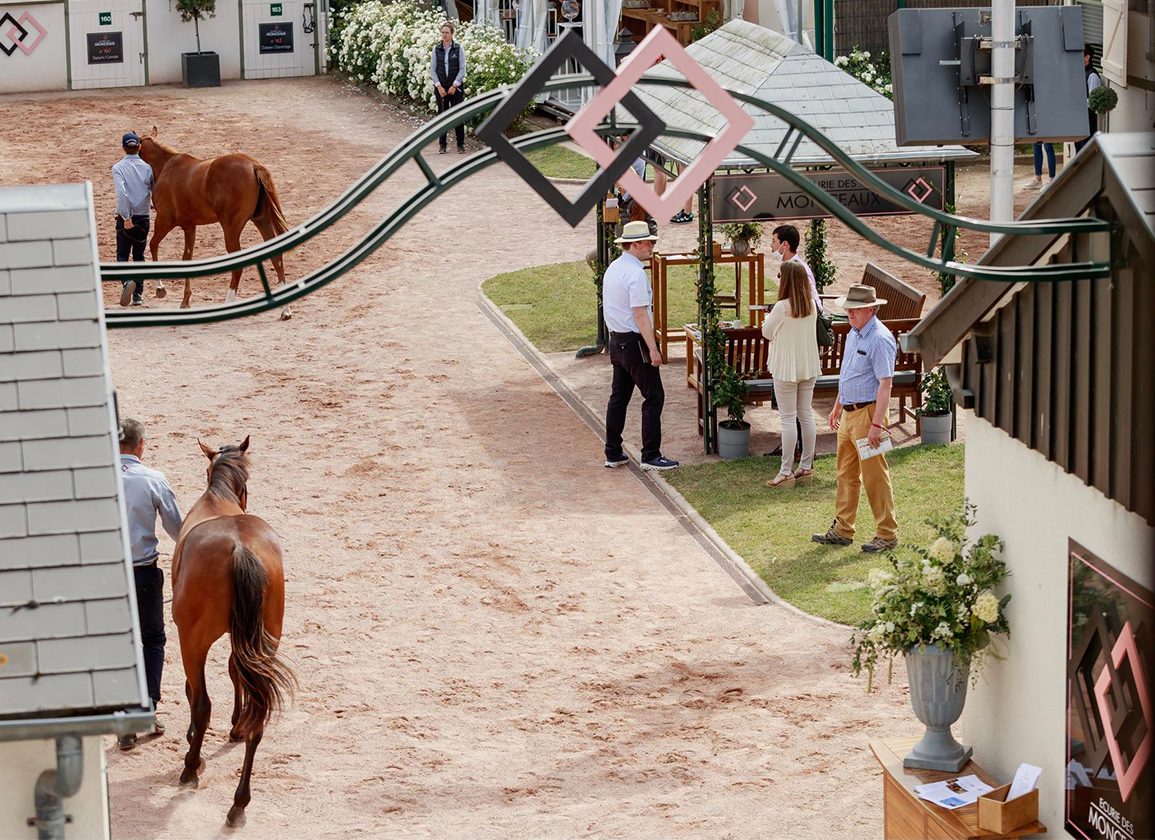 Inspections get underway from Wednesday in Deauville | Zuzanna Lupa

Aside from perhaps the odd delay at the Channel Tunnel for British-based visitors heading to Deauville, the Arqana August Sale should be just about back to normal this year for the first time since 2019. A loaded plane will jet in direct from Saratoga on Thursday morning, when the scene will be set for three days of trade at the auction which routinely acts as the bellwether for the European yearling market.

Small changes to the format can be found this year in the fact that the August Sale is no longer comprised of an unofficial part one on Saturday and Sunday with a follow-up all-day session on Monday. This year, France's elite yearlings (plus some visitors) will be sold alphabetically throughout the three sessions, and with the French holidays meaning that racing takes place on Sunday and Monday, the sale will begin at the earlier time of 2 p.m. on Saturday, 15 Aug., with the two following sessions beginning after racing at 5 p.m. each day. The V.2 Sale, which was traditionally held just after the August Sale, has now been replaced by a new two-day auction in September.

So, that's the housekeeping done. What of the catalogue?

“Arguably it's even better than usual,” states Arqana's executive director Freddy Powell, and there is plenty of substance in his bold claim.

“We have a number of siblings to Group 1 winners, but it's not really even the numbers, it's the Group 1 races they won: the Champion S., two Arc winners, the Prix de Diane, a champion 2-year-old, a Derby winner. And we have the first foal out of a Prix de Diane winner; that's never happened before.”

Indeed, there is plenty to get one's teeth into when compiling lists, and agents working the sale in earnest will simply have to plump for the 'all show' option as they arrive at each new consignment around the sales grounds.

We'll be hearing more from individual vendors as the week progresses, but to whet the appetite, here is a sample of some of the most desirable pedigrees in the book. As mentioned, the Prix de Diane does indeed loom large in the catalogue. Not only does the three-quarter-sister to this year's winner Nashwa (GB) (Frankel {GB}) appear on Saturday as lot 93, but, as referenced by Powell, Monday's session features a Sea The Stars (Ire) daughter of the 2019 winner Channel (Ire) (Nathaniel {Ire}), who will be sold by La Motteraye Consignment as lot 234.

Ten days ago, Nashwa backed up her French Classic win with another Group 1 victory, this time against her elders, in the Nassau S. at Goodwood. The fact that physically she appears still to have so much more to give, coupled with the assertion from her owner-breeder Imad Al Sagar that Nashwa will remain in training at four, only adds to the appeal to her younger sister by another Blue Diamond Stud Group 1-winning homebred, Decorated Knight (GB). The filly is the fourth foal of her listed-winning dam Princess Loulou (Ire) (Pivotal {GB}), whose finest moment on the racetrack came when finishing runner-up in the G1 Prix Jean Romanet just across the road from where her daughter will sell.

The two aforementioned Arc winners with siblings in the August catalogue are Sottsass (Fr) (Siyouni {Fr}), who will himself be represented by first foals at the sales later in the year, and the dual winner Treve (Fr) (Motivator {GB}).

It is fair to say that the family of Sottsass stole the limelight at this sale in its delayed format two years ago, when his half-sister Pure Dignity (GB) (Dubawi {Ire}) fetched €2.5 million. Sottsass himself was a more modest €340,000 but we can expect to see his full-brother, who sells early in Sunday evening's session as lot 154, command a higher price tag when sent through the ring by his breeder and leading consignor Ecurie des Monceaux. He has not only Sottsass to recommend him of course, as the first name on the page is his half-sister, the seven-time Grade I winner Sistercharlie (Ire) (Myboycharlie {Ire}).

In a year in which Haras du Quesnay sadly lost its patriarch Alec Head, the stud's four-strong draft contains an Intello (Ger) half-brother to the filly who was the apple of her breeder's eye, Treve. The son of the Anabaa mare Trevise (Fr) is set to sell on Sunday evening as lot 171.

Early attention on Saturday could fall on lot 10, Haras de Colleville's full-brother to the G1 Champion S. winner Sealiway (Fr) (Galiway {GB}), while another horse early into the ring with some pretty smart credentials is Haras d'Haspel's Sea The Stars filly (lot 17) out of a Kodiac half-sister to Classic winners St Mark's Basilica (Fr) (Siyouni {Fr}) and Magna Grecia (Ire) (Invincible Spirit {Ire}). She is not the only one in Jose Delmotte's draft who has a close connection to a recent European champion 2-year-old as later in that session the Haspel team will present lot 62, a Siyouni half-sister to Native Trail (GB) (Oasis Dream {GB}), who of course backed up his championship juvenile honours of last season by winning the Irish 2000 Guineas after finishing second in the 2000 Guineas at Newmarket.

Eric L'Hermite's Haras de Grandcamp will offer a Dabirsim (Fr) half-sister to last season's G1 Prix Marcel Boussac heroine Zellie (Fr) (Wootton Bassett {GB}) as lot 123, while a first taste of the market's response to Darley freshman Too Darn Hot (GB) could be found in the sale of lot 90, who is out of a three-parts-sister to Classic winner Persian King (Ire) (Kingman {GB}).

“We have simplified the format a little bit for people to be able to see all the horses before the start of the sale so they can enjoy the hospitality during the sale,” explained Powell.

“People are more and more professional on that front so we have limited the number of horses to the number of stables we have, so there is no turnover or anything like that. All horses will be there from the beginning of the inspections, and especially now that we have the consistent quality of horses though the three days, it was important that before the first horse goes into the ring that everybody has the opportunity to see the last horse who will go through the ring on Monday night.”

The late former champion sire Galileo (Ire) has been a staple of the elite sales for so long, and three of his penultimate yearling crop will find their way to Deauville, including the daughter of the Group 3 winner and Group 1 runner-up Wind Chimes (GB) (Mastercraftsman {Ire}), a member of the Haras des Capucines draft as lot 188. Galileo's close relative Adlerflug (Ger) was also lost to breeders recently, and the late German champion sire has just one representative at Arqana, lot 163, a filly out of a Lope De Vega (Ire) half-sister to the group winners Sevenna Star (Ire) and Savanne (Ire).

Young Coolmore sire Churchill (Ire) has provided arguably the best 3-year-old colt in Europe so far this season in the G1 Prix du Jockey Club and G1 Eclipse S. winner Vadeni (Fr), and his selection of 15 yearlings in the August catalogue include a half-brother to another Classic winner, the Derby hero Wings Of Eagles (Fr). The April-born colt has another four stakes-performing half-siblings and hails from a family replete with black type which has served his breeder Haras de Montaigu very well through several generations. He will be offered as lot 191.

As the countdown to next Saturday's opening session approaches, Powell has headed off to Saratoga to assist Arqana's American representative Amy Lanigan in making sure that everyone who wants a seat on the plane heading to Normandy is accommodated.

“It's the first big sale since we have had no travelling restrictions and you can feel that people are eager to embrace it as much as they can,” he says. “We have people coming from the US, from Japan, from Australia, from everywhere really. And we are looking forward to welcoming people back to Deauville at full capacity, with all the fun we can have here.

“Anyone interested in attending the sale should get in touch with our local agents for anything they need. We will be happy to help.”