Home » Archive » Europe » Alec Head: Farewell to the Most Remarkable of Horsemen

Alec Head: Farewell to the Most Remarkable of Horsemen 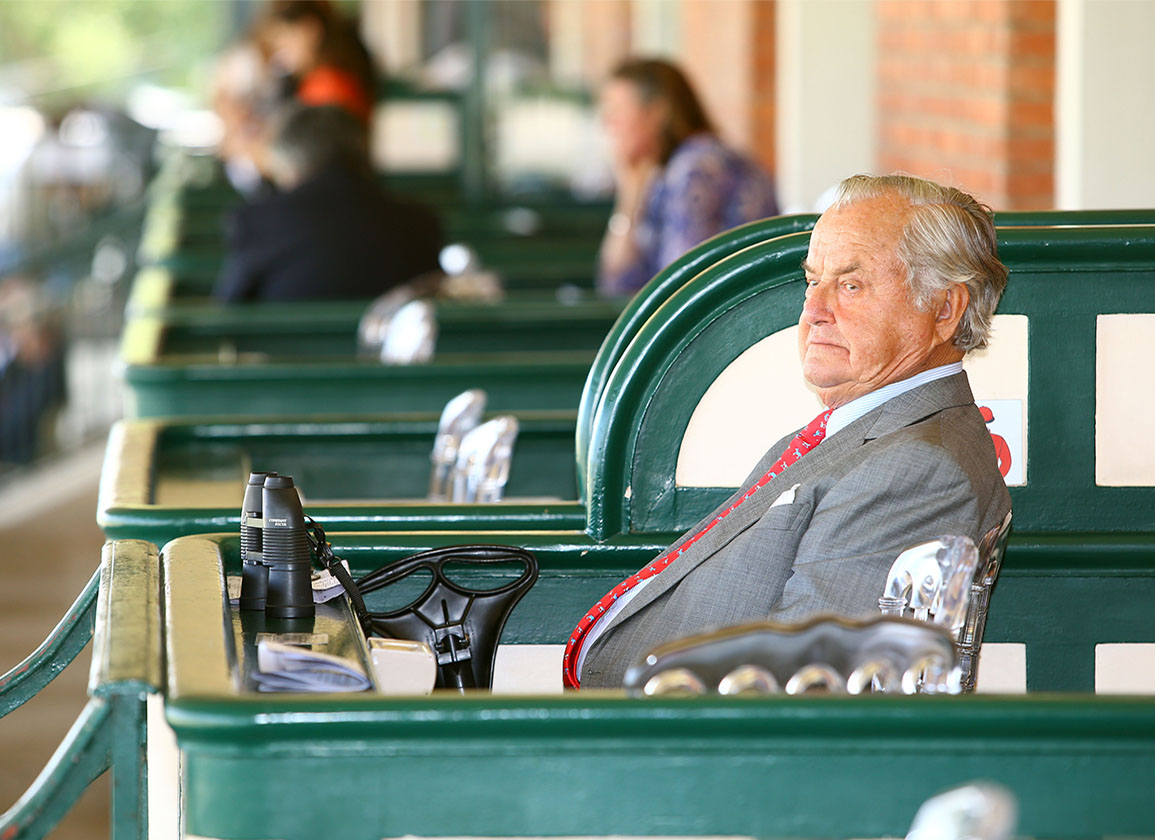 Few people genuinely deserve to be described as a legend in their own lifetime. Lester Piggott was one, while Alec Head, who passed away on Wednesday at the age of 97, was another. One of the greatest names in the world of both training and breeding, Alec Head was also a very accomplished jockey in his youth and, coming from a great racing family, he passed on his skills to the subsequent generations, to the extent that one could say that the influence of his family will live forever.

As their British surname implies, the Heads, like several of France's great racing families, have their roots in England. Alec Head's father William, who served in the British Army during the First World War, trained in Chantilly, where Alec Head was born in August 1924. Happily, the family's involvement in the sport survived the German occupation of France during the Second World War.  Just two and a half years after the liberation of Paris, Alec Head, aged only 22, enjoyed his most famous day in the saddle when guiding Le Paillon (Fr), trained by his father, into second place in the Champion Hurdle at Cheltenham, beaten only by the great National Spirit (GB). The form of that Champion Hurdle was given the ultimate validation later that year when, ridden by Fernand Rochetti, Le Paillon won the Prix de l'Arc de Triomphe. Already, though, Alec Head's thoughts were turning towards training and that same year he began to follow in his father's footsteps, taking out his own training licence.

So good was the start which Alec Head made to his training career that when HH Aga Khan III, influenced largely by the superior prize-money available in France, decided to move the bulk of his string from England to France at the end of 1951, he chose Head as his trainer. This arrangement reaped a very swift dividend. The Aga Khan, advised by Prince Aly Khan, had bought Nuccio (Ity) (Traghetto {Ity}) out of Italy as a 3-year-old at the end of 1951; in 1952 Nuccio won firstly the Coronation Cup at Epsom and then the Prix de l'Arc de Triomphe, thus becoming the first of the four winners of France's biggest race which Alec Head would saddle.

Head was thus established among the elite of French trainers while still in his 20s, thanks to the patronage of HH Aga Khan III and his son Prince Aly Khan as well as that of M. Pierre Wertheimer, the co-founder (with Coco Chanel) of the Chanel cosmetics empire. That Head had attracted the patronage of Wertheimer indicated the respect in which he was already held. Wertheimer had been racing horses since before the First World War and had enjoyed significant success on both sides of the Channel during the inter-war years with the likes of the brilliant Epinard (Fr), whom he bred, and the top filly Mesa (Fr), whom he leased and who, trained in Chantilly by Albert Swann, carried his colours to victory in the 1,000 Guineas at Newmarket in 1935.

It didn't take long for the name of Alec Head to become even better known on both sides of the Channel as a trainer than it had been as a jockey. Nuccio was the first to make the British public familiar with him as a trainer and next came Vimy (Fr) (Wild Risk {Fr}), bred and raced by Wertheimer. A good juvenile in 1954, Vimy established himself as a top-class 3-year-old in 1955. In France he won the Prix Noailles before finishing a close second in the Prix du Jockey-Club. Head then sent him to England for the King George VI and Queen Elizabeth S. at Ascot, where he became the first overseas-trained horse to win what was at the time the most valuable race run in Great Britain.  Vimy subsequently became an influential stallion, perhaps most notable for his son Le Fabuleux (Fr) who, trained by William Head for Mme Guy Weisweiller, won the Prix du Jockey-Club in 1964.

Vimy's dam Mimi (Fr) continued to be a great servant for the Wertheimer/Head team, most notably producing the mighty grey Midget (Fr) (Djebe {Fr}) who, two years Vimy's junior, was a fabulous filly.  She won the Cheveley Park S. at two, the Coronation S. and Prix de la Foret at three and the Queen Elizabeth II S. at four. In turn Midget bred Mige (Fr) (Saint Crespin III {GB}), winner of the Cheveley Park S. in 1968, as well as Madge (Fr) (Reliance {Fr}), who became the dam of Ma Biche (Key To The Kingdom). The latter, bred by Alec Head with his wife Ghislaine, won the 1,000 Guineas in 1983, trained by the couple's daughter Cristiane (Criquette) and ridden by their son Freddy.

The highest peak scaled by the Wertheimer/Head combination, though, was the biggest race of all: the Derby. Still aged only 31, Head sent out Pierre Wertheimer's home-bred colt Lavandin (Fr) (Verso {Fr}) to take the Blue Riband of the Turf in 1956. Further British Classic success for the stable followed shortly afterwards when the Aga Khan III's Rose Royale II (Fr) (Prince Bio {Fr}) won the 1957 1,000 Guineas. Later in the season she took the Prix du Moulin at Longchamp and the Champion S. at Newmarket. Two years later Prince Aly Khan's Taboun (Fr) (Tabriz {GB}), who had won the Prix Robert Papin at two, followed up a facile victory in the Prix Djebel with a three-length triumph in the 2,000 Guineas under George Moore. Later that season Head supplied Prince Aly Khan with more great days when Saint Crespin (GB) (Aureole {GB} took the Eclipse S. at Sandown in the summer and the Prix de l'Arc de Triomphe in the autumn, ridden by Moore on each occasion

Head was thus well established among the greats of the training ranks by the end of the 1950s.  He began the '60s in similar vein, saddling the first of his three Prix du Jockey-Club winners in 1960 with HH Aga Khan IV's Charlottesville, ridden by George Moore. By this time, though, he was already well on his way to occupying a position of similar eminence in the world of breeding. In 1958 William Head had bought Haras du Quesnay and, with the help of his sons Alec and Peter, set about making it a world-leading bloodstock operation. Since that day, many of the horses trained by the Head family have been bred and raised there, owned either by the Heads or by one of their longstanding clients.

Ultimately, Alec Head continued to train until 1984. He had been easing himself out of harness in that respect for a decade, with his daughter Criquette becoming responsible for an ever greater portion of the stock produced by Haras du Quesnay. For Alec, family was everything. His wife Ghislaine was utterly integral to his involvement in the sport. Criquette was just as much her father's daughter as he had been his father's son; while Freddy, six times France's champion between 1970 and 1984, was the jockey for the both of them before launching his own hugely successful training career. The highlight of this has, of course, been the legendary Wertheimer home-bred Goldikova (Ire). She is a Head horse through and through: her sire Anabaa ranks as one of the most fabled racehorses ever to pass through the Heads' hands and she comes from a family which thrived under Alec Head's tutelage for generations.

Furthermore, it was not just Alec Head's own family which revolved around him. When Pierre Wertheimer died in April 1965, his son Jacques took over his racing empire and in time became at least as close a confederate and friend of Alec Head as his father had been. Eventually, subsequent generations of Wertheimers have maintained the family ties. As regards jockeys, the one most synonymous with Alec Head's training career (aside, of course, from Freddy) was the great Australian George Moore. It was only natural, therefore, that in time Moore's son Gary (who became France's champion jockey in 1987) should ride for the Heads. Alec Head's final Prix de l'Arc de Triomphe winner (Gold River in 1981) summed this up: she was owned and bred by Jacques Wertheimer and ridden by Gary Moore. (Gold River subsequently achieved further fame as the third dam of Goldikova). Five years previously Ivanjica (Sir Ivor) had won the great race, owned and bred by Jacques Wertheimer, trained by Alec Head and ridden by Freddy Head.

The horses mentioned above represent merely a small fraction of the top-class thoroughbreds who bear the imprint of Alec Head's magic. Riverman, Lyphard, Roi Lear (Fr), Val De L'Orne (Fr) and Bering are five to spring instantly to mind, along with the mighty Treve (Fr). Bred and raced (until her sale to Al Shaqab) by Haras du Quesnay and trained by Criquette Head, the dual Prix de l'Arc de Triomphe heroine has Anabaa, Riverman and Lyphard as the sires of her first three dams. Her stellar racing career provided a wonderful tribute to the great racing brain of Alec Head in the autumn of his life, just as subsequent generations of his family (which include his grandchildren Christopher and Victoria, both of whom are now trainers in Chantilly) will continue to do so for many years to come.  We offer his family our condolences, while we marvel at the extent to which the racing and breeding worlds were enriched by this most remarkable of horsemen.

“For nearly 100 years, Alec Head has marked the history of racing, first as a jockey, then as a trainer for the sport's most prestigious owners, but also as a breeder of Prix de l'Arc de Triomphe winners that were bred at his Haras de Quesnay in Normandy and as an owner of champions. We remember him for his pioneering spirit, his talent for exploring new projects, for being a man ahead of his time who always looked towards the future. He was incredibly daring and ambitious. His exceptional career has influenced several generations of racing professionals and enthusiasts. Alec Head inspired his children and grandchildren who today carry on the family tradition. To his family and to all those who loved and admired him, France Galop offers its sincere condolences.”