Are Challenges To Lasix Phase-Out Baked Into Current Regulatory Policies? 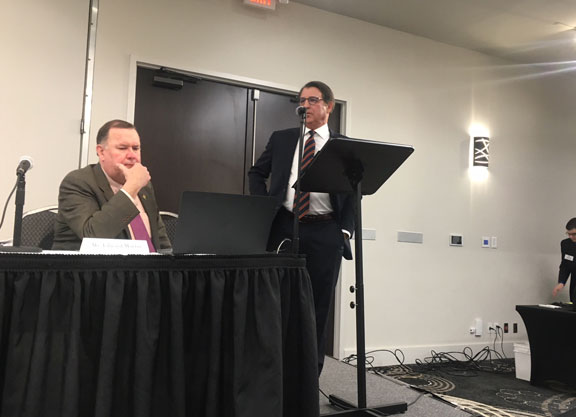 The Week In Review, by T.D. Thornton

One of the meatiest bones of contention from last week's Lasix phase-out debate is that representatives from the National Horsemen's Benevolent and Protective Association (NHBPA), the Thoroughbred Horsemen's Association (THA), and the Association of Racing Commissioners International (ARCI) all told TDN they were left out of discussions that led to the multi-track proposal to end Lasix usage in juveniles starting in 2020 and in all stakes races by 2021.

You can easily flip this argument on its head by pointing out that from the perspective of the coalition tracks–those owned/operated by the New York Racing Association (NYRA), The Stronach Group (TSG), and Churchill Downs Inc., plus Oaklawn, Del Mar, Keeneland, Lone Star, Remington, Tampa Bay Downs, and Los Alamitos (Thoroughbreds)–it's unlikely that this bold first step for United States medication reform would have ever gotten off the ground had horsemen been asked to actively partner in and shape the proposed phase-out.

Even Eric Hamelback, the NHBPA's chief executive, acknowledged to TDN on Apr. 17 that his organization runs the risk of being “labeled as obstructionists” by continuing to advocate for the Lasix status quo to remain firmly in place. Hamelback is willing accept that risk, he explained, because “I like to think that we're acting in the horses' best interest and acting alongside with the veterinary leadership community on this issue.”

TDN's Apr. 18 coverage of the Lasix phase-out announcement included pro and con comments from 15 different industry stakeholders. Interviews with Ed Martin, the ARCI president, and Alan Foreman, the THA chairman/chief executive, had to be truncated within that article because of space considerations. But their expanded comments (published below) yield key clues about how the practicality of the Lasix proposal might work–or be challenged–based on the regulatory structure that is already in place.

“Why are we not talking about something that's directly linked to potential breakdowns?” Martin asked rhetorically as soon as he picked up the phone to answer a TDN query on the Lasix phase-out. “It's a very pertinent issue, because that's the major problem that we have.

“We are always open to anything that's going to help address the breakdown a situation. I'm not sure that this will,” Martin continued. “But it's certainly a hot issue. It's been a hot issue for more than 15 years, and some people may see an opportunity to achieve something in the current [crisis-driven] environment that they may not have been able to achieve otherwise.”

Martin then ticked down a list of possible roadblocks the coalition might encounter on a path to implementation.

“It has to come in the front door. Nobody has proposed a model rule change for us to permit this, so we have not been at the table in these discussions,” Martin said. “They're obviously going to have to go to the individual racing commissions, and I am not aware of any of the commissions being involved in this. I know the ARCI has certainly not been involved in any discussions about this.

“So the question is how the tracks wish to implement this policy,” Martin said. “[From the regulators' perspective], somebody has to come in the door with an application [to change Lasix policy]. They did that in California, and they did it with the support of the horsemen.”

Martin is referring to an agreement between TSG and the Thoroughbred Owners of California to cut the permitted race-day dose of Lasix from 10 ccs to 5 ccs at Santa Anita and Golden Gate Fields. On Mar. 28, the California Horse Racing Board approved that regulation for the balance of those current race meets.

But beyond the broad issue of whether or not other horsemen's groups will support any sort of phase-out initiative, Martin postulated that the burden of additional Lasix testing could become a sticking point.

“The commissions' drug testing programs are done to enforce the official rules,” Martin said. “If a commission authorizes a departure from the promulgated rules that lets the track set [no Lasix] as a condition of entry…what obligation does a commission have to perform tests to enforce a different policy for different races at that racetrack? The concept of just making these announcements,” Martin added, doesn't solve the discrepancy between what the tracks would like to accomplish and the letter of the law.

Litigation–or at least the threat of it–is also sure to play a role, Martin said.

“Another issue has to do with if a commission does authorize this, is there any potential liability for damages from owners who might find that their horse has been excluded from participation?” Martin asked.

“Or even worse, if a horse [deprived of Lasix] suffers a bleeding incident that might exclude that horse from future participation?” Martin added.

Foreman noted that New York and Maryland tracks are currently the only THA-member entities under his direction that would be affected by the proposed phase-out. But he had a strong sense of what might or might not fly, Lasix-wise.

“New York's in a bit of a different situation [from other jurisdictions] because NYRA can card non-Lasix [stakes] races if they choose to do so,” Foreman explained. “Under New York's current medication regulations, I believe NYRA can establish whatever conditions it wants for individual races. They just can't do a blanket ban on Lasix because it's a permitted medication. So it would require a change of regulation by the gaming commission to eliminate the use of Lasix in 2-year-old races.

“In Maryland, TSG would need the Maryland Racing Commission to change its regulations to prohibit Lasix in the graded stakes races and with respect to 2-year-olds,” Foreman summed up. “They have not engaged at all with the Maryland horsemen or breeders on this issue. The Maryland horsemen and breeders have already voted to oppose any change to the current medication policy [because it is] not in the best interest of the horse, which is our primary responsibility.”