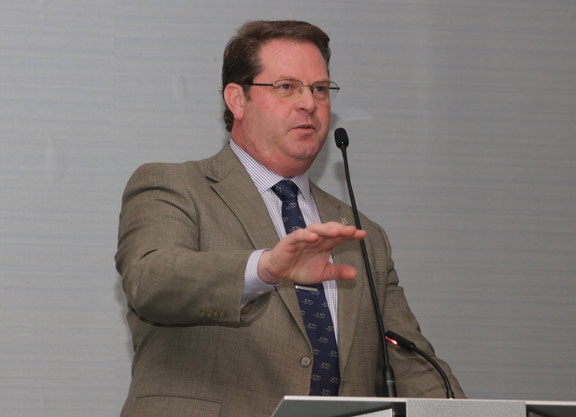 A proposed phasing-out of race-day Lasix starting in 2020 that is being discussed by track operators in Kentucky and New York has yet to formally involve representatives from the Horsemen's Benevolent and Protective Association (HBPA), Eric Hamelback, the group's national chief executive, told TDN Wednesday afternoon.

“The groups that own racetracks have every right to discuss safety measures for the industry. Any kind of discussions for safety are positive discussions,” Hamelback said. “But there were no direct discussions with the HBPA about this as a proposal. I checked with the Kentucky HBPA, and there wasn't even a formal discussion. The overall feeling–mine and theirs–is we certainly need to listen to what any track wants to propose as a safety measure.

“But at this point all horsemen are going to take the same stance” regarding Lasix, Hamelback continued. “We are, and are going to continue, to follow what the veterinary leadership tells us is best for the horse. We can continue to be labeled as obstructionists, but I like to think that [by keeping the status quo] we're acting in the horses' best interest and acting alongside with the veterinary leadership community on this issue.”

On Apr. 16, Daily Racing Form first reported that officials from Churchill Downs, Keeneland, and the New York Racing Association are set to announce a plan–possibly as early as this week–that would prohibit race-day Lasix usage for 2-year-olds starting in 2020. The ban would “then be expanded to all stakes at the tracks in 2021,” including the GI Kentucky Derby and GI Belmont S.

Joe Appelbaum, the president of the New York Thoroughbred Horsemen's Association, confirmed via phone that he knows a phase-out plan is in the pipeline, but he wanted to defer commenting on it until the tracks make an official announcement.

Hamelback said the HBPA would be comfortable participating in Lasix discussions with Kentucky tracks so long as veterinary leadership groups like the American Association of Equine Practitioners are also consulted.

In 2017, when proposed Horseracing Integrity Act legislation sought to end national use of race-day Lasix, the AAEP released a statement that read, in part, “The AAEP's current policy on race-day medication administration endorses the use of furosemide [Lasix] to help mitigate the occurrence of exercise-induced pulmonary hemorrhage in the racehorse. This policy is based on the overwhelming body of international scientific and clinical evidence.”

When asked if he thought the proposed Lasix phase-out was more of a public-relations reaction to a potential national welfare crisis brought about by 23 recent equine fatalities at Santa Anita Park instead of a true “what's best for the horse” plan of action, Hamelback chose his words carefully before responding.

“I agree that the situation that we've been placed in has been exacerbated in a public reactionary form,” Hamelback said. “But I think we can all agree that Lasix isn't the cause. What happened at Santa Anita is multi-factorial. The only thing that we probably all know is that Lasix wasn't a factor. So what I would encourage people to do is not make a reactionary response and paint yourself in a corner by removing something that A) Is in the best interest of the horse; B) We know didn't cause the breakdowns, and C) What will happen when a fatality does occur in a race where there was no Lasix administered on race day? I don't want to be driven by public perception if it's not in the best interest of the horse.”

Hamelback continued: “I do have a strong opinion about not caving to public pressure just because someone clamors or uses an incorrect semantic that Lasix is 'dope.' I take offense to that. Lasix is a choice. You don't have to use it. I don't want [any potential policy] it to be a knee-jerk reaction. And I don't think our industry should cave to public pressure from those outside the industry on something that they're not involved with and may not have as much working knowledge of as those of us in the industry have.”