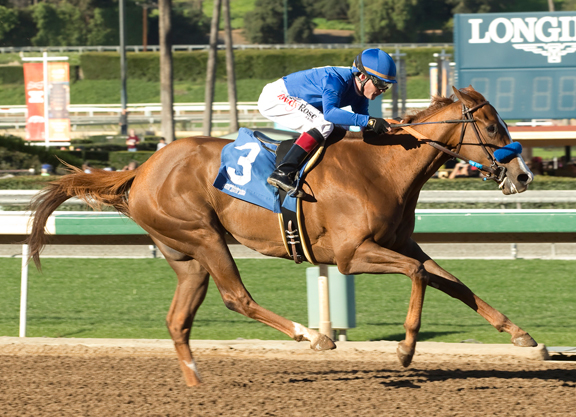 Campaigned in partnership by Taylor Made's Medallion Racing, breeder Keith Abrahams and Sandra Lazaruk and trained by John Sadler, it was decided to bypass the GI Beholder Mile S. in early June in favor of a summer/fall campaign with a long-term eye on the GI Breeders' Cup Filly & Mare Sprint at Churchill Downs.

“She's doing really well,” Medallion Racing's Phillip Shelton said. “She never left John's barn at Santa Anita. She basically just got a couple of weeks off. Really nothing wrong–John just felt like she wasn't 100%, and if you're going to try to face Unique Bella and Paradise Woods in a Grade I, we wanted to make sure that she was 100%. Once we knew that race was out of the picture we said, 'You know what? Let's just give her a little break, get ready for Del Mar and hopefully point to the Breeders' Cup.'”

A jaw-dropping debut winner last February, the chestnut is a perfect three-for-three during her 4-year-old season, which also includes tallies in the Kalookan Queen S. Jan. 14 and GIII Las Flores S. Feb. 18. All six of her career starts have been made sprinting at Santa Anita.

“She should have her first work back this weekend,” Shelton said. “She's been back galloping for the last couple of weeks and has been doing great. We always toyed around with the idea of stretching her out, but I'd say at this point that we'll keep her at one turn through the Breeders' Cup. That would probably be the plan. We'll point for something at Del Mar, then keep our options open for the final prep before the Breeders' Cup.”