Another For Frankel As Muguet Goes To Sibila Spain 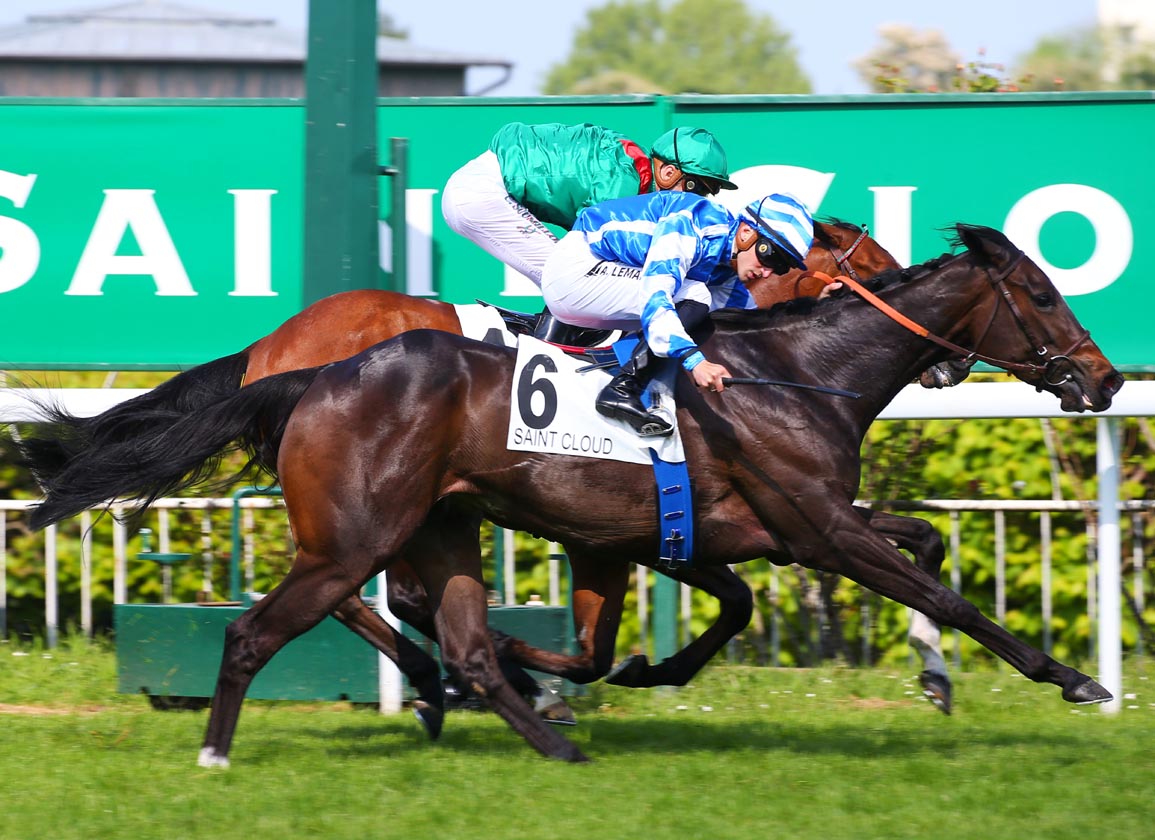 Galileo (Ire) had been omnipresent throughout the week and his influence even extended less directly to Saint-Cloud on Sunday when Sibila Spain (Ire) registered a pattern-race double for Frankel (GB). Following on from the impressive G2 Prix Greffulhe success of Onesto (Ire) earlier on the card, Yeguada Centurion SLU's daughter of the G1 Irish Oaks runner-up L'Ancresse (Ire) (Darshaan {GB}) took advantage of a change of plan to prevail in the G2 Prix du Muguet. Abandoning the front-running tactics that had been employed of late, Aurelien Lemaitre anchored the TDN Rising Star in last throughout the early stages and she duly demonstrated her versatility and tractability by relaxing into a steady rhythm. Enjoying a clear run down the outer inside the final two furlongs, the 7-1 shot built momentum to collar Dilawar (Ire) (Dubawi {Ire}) in the final stride and force a head verdict. “It was the right move to change tactics and come from behind,” trainer Christopher Head said. “My concern really was that she would not settle, even with cover but she proved me wrong. It's a great result and she proves she has lost none of her fighting spirit.”

Sibila Spain had suggested several times since her nine-length winning debut here last March that a race like this was within her capabilities, finishing less than a length in arrears when coming from the back to be fourth in the G1 Prix Saint-Alary and just over a length back when filling the same spot in the G1 Prix de Diane. Having attempted to take the Chantilly Classic by the scruff of the neck, she was asked to go from the front again when garnering ParisLongchamp's Listed Prix de Liancourt over the same 10 1/2-furlong trip in September. Forcing tactics failed to work in deeper ground and stronger company as she faded to seventh in the G1 Prix de l'Opera back there on Arc day and she was again caught late on when fourth on her return in the course-and-distance G3 Prix Edmond Blanc Apr. 2. Putting it all together here, the bay who has upped her stock will race outside of France for the first time on her next start according to her trainer. “Last year in the [G1] Prix Saint-Alary when she was held up she finished so fast, so I thought we had to try again,” he added. “For the time being, we will stick to mile races and most probably we will go next to the [G2] Duke of Cambridge Stakes [at Royal Ascot].”

Becoming the 63rd group winner for Frankel, Sibila Spain is a full-sister to the G3 Vintage Crop S. winner and G1 Gold Cup-placed stayer Master of Reality (Ire) and the listed-placed Eminent Authority (Ire). The aforementioned L'Ancresse, who was also runner-up in the GI Breeders' Cup Filly & Mare Turf, also produced the Listed Oyster S. winner Chamonix (Ire) from a mating with Frankel's sire Galileo (Ire) and is the second dam of the G3 Henry II S. scorer Magic Circle (Ire) (Makfi {GB}). L'Ancresse is a full-sister to the G1 Prix Saint-Alary heroine and stakes producer Cerulean Sky (Ire) and a half to the Irish Oaks heroine Moonstone (GB) (Dalakhani {Ire}), who is herself responsible for the G3 Chester Vase winner and G1 Epsom Derby runner-up US Army Ranger (Ire) also by Galileo. Frankel's influence in this family extends to Moonstone's G3 Ballysax S. and G3 Champions Juvenile S.-winning son Nelson (Ire).