Home » Archive » Shared News » And The Last Shall Be First…

And The Last Shall Be First… 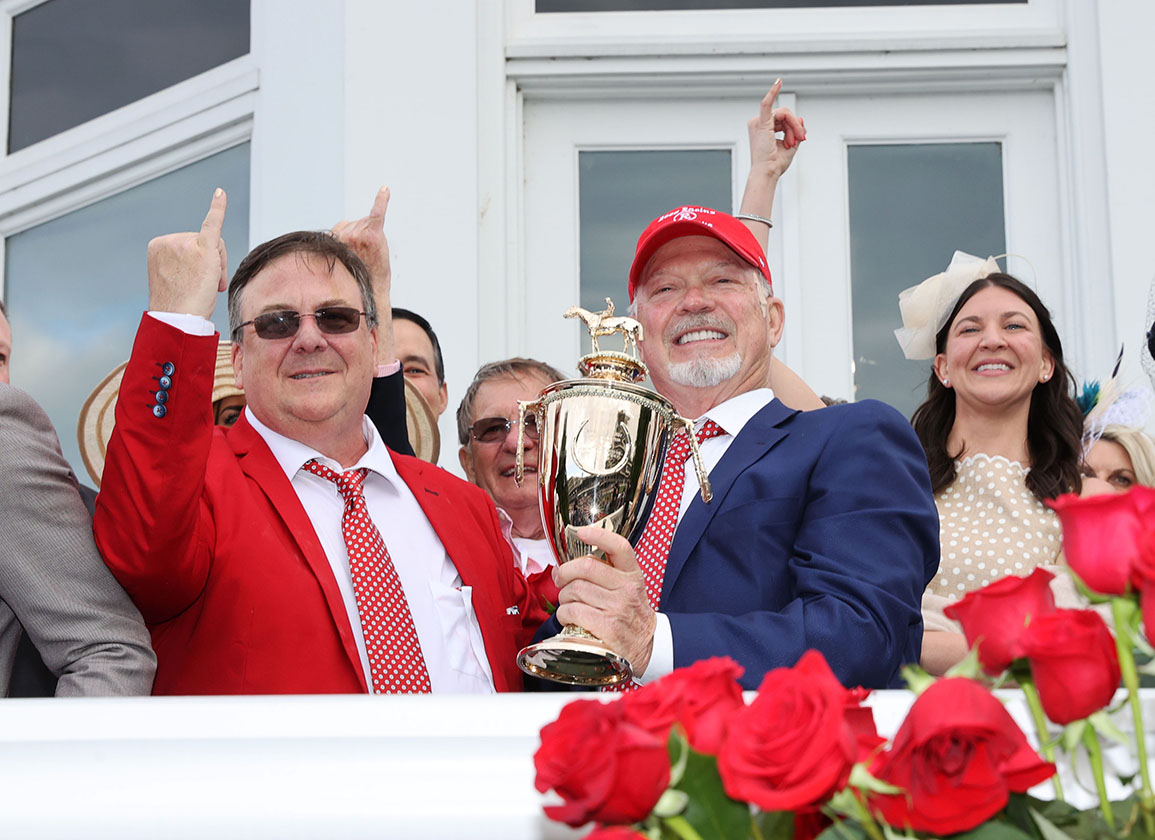 The Week in Review by T. D. Thornton

A blue-collar trainer lives through a devastating barn fire caused by a lightning strike that kills 23 horses. But he vows to rebuild his racing stable, and a few years later gets connected with an owner client who hasn't had much success at low levels of the sport, yet wants to forge ahead anyway because his love of Thoroughbreds exceeds his disillusionment with the industry.

They acquire a colt for relatively short money who is essentially a cast-off from a much larger racing operation that has bred a record nine GI Kentucky Derby winners. This longshot wins by a gaudy 17 1/4 lengths the day he is claimed by these new connections, then fails to win a race over the next eight months. But he manages to sneak into America's most important and historic horse race because of a quirky qualifying points system and the last-minute scratch of a higher-ranking entrant.

Out of loyalty, the owner and trainer stick with the colt's minor-track jockey who has never ridden in a major stakes, let alone a race of the magnitude of the Derby. The colt goes off at 80-1, the longest shot in the 20-horse race, starting from the undesirable outermost stall. He is last the first time the field flashes past the finish wire, then deftly weaves his way through the tight pack and blasts past the most regally bred and expensive horses in the nation to register the second-largest betting upset in Derby history.

Is someone taking notes for a movie script?

You needn't bother. Such a plot line would surely get rejected on the basis that no one would believe it could happen.

But it did at Churchill Downs Saturday, and the compelling “everyman” story line involving Rich Strike (Keen Ice), owner Rick Dawson, trainer Eric Reed, and jockey Sonny Leon has proven buoyantly irresistible in the immediate aftermath of the improbable upset.

“I'm not telling you by any means we knew we had a Derby winner,” Reed continued. “If we didn't think we were going to be in the Derby, we wouldn't have been prepping for this all year. We knew we had a horse that was capable of running good. And so anybody that's in this business, lightning can strike.”

Or–in Reed's case–strike twice. That first bolt of lightning, in 2016 at his Mercury Equine Training Center in Lexington, sparked tragedy. This one ignited triumph.

“We don't go out and buy the big horses. We just try to have a good-quality stable. We always perform well,” explained the 57-year-old Reed, a second-generation horseman who is based in Kentucky but campaigns most often at C-level tracks in Ohio, Indiana, and West Virginia.

“Our percentages are always good, and we take care of the horse first. And the rest falls into place.

“I never dreamed I would be here. I never thought I'd have a Derby horse. I never tried to go to the yearling sale and buy a Derby horse,” Reed continued. “I just wanted to buy my clients a horse that would keep them happy, have some fun, maybe make a little money. If we got a good one, terrific. So this was never in my plans. Everybody would love to win the Derby. I always would, but I never thought I would be here, ever.”

Happiness? Fun? A little money? The hard-charging chestnut with the skinny white blaze and ornery post-race disposition delivered on all counts Saturday.

Amid the press conference hoopla, Dawson wasn't even sure how many winners he's had in his brief foray into Thoroughbred ownership, which he now conducts under the stable name RED TR-Racing, LLC. Fewer than 10, he guessed? He didn't even think he had won an allowance race prior to taking down the Derby.

“We had one,” Reed reminded him.

“But as far as my career in horse racing, I think it just started,” Dawson said, eliciting laughter from a press corps that was relishing having fresh faces at the Derby podium speaking in a genuine, off-the-cuff manner.

“I have two horses training,” said Dawson, who hails from Oklahoma and is semi-retired from owning an energy-industry business. “One is rehabbing that was in training. It's not a serious injury. And we had a really nice filly that was really fast. We had great expectations for her. Eric detected a little something with her one day during training, and we had the vet take a look and said, yeah, she has a little knee issue and she might run 20 more times, but she may not. And Eric and I made promises to each other a long time ago. In fact, Eric made this promise to himself a long time before he met me. But we just don't push a horse on the track that's not ready.”

Dawson didn't mention that filly's name, but did disclose that he retired her and bred her to Keen Ice–not knowing at the time that stallion would be the sire of his eventual Derby winner.

“I'm kind of in the Keen Ice family, as you can tell,” Dawson said. “And just recently I actually bought a yearling [by] Keen Ice that's an Ohio-bred. So that's kind of the family right there. It's very limited. I guess there's five horses. And I think the most horses I've ever owned a share in at one time is maybe six. But I didn't get into this to win the Kentucky Derby–although I'm not giving the trophy back.

“I got in it because I loved it, and it was interesting. It was fun. I was at a point in my life where I had the time and the energy, wanted to go to the farm; and I learned the business. And Eric was so great about teaching me. If I asked him a stupid question, he didn't say, 'That's a stupid question.' He would just give me a great answer, and truthfully. And I would learn from that. And that's how we built what we built.”

Dawson said he partnered with Reed because he liked the way the veteran trainer “usually undersells and overperforms,” adding, “That's kind of the way he goes about life.”

Reed described their relationship like this: “Well, Rick and I were trying to build a stable. He had gone through a rough patch. And he really should have gotten out of the business, but he decided to give it another chance.”

At a later point in the press conference, Dawson was prodded to explain the nature of that “bad luck” as an owner. He showed no hesitation in taking the high road when answering.

“As far as my bad experiences in horse racing, I'm not going to go there,” Dawson replied diplomatically. “Thanks, though.”

The afterglow from the life-altering victory will give way to a back-to-work mode as Rich Strike heads to Baltimore–like all Derby winners do–with a figurative target on his back for the GI Preakness S. at Pimlico.

The colt's connections should be forewarned that life under a microscope awaits.

When they drape your horse in a blanket of roses at Churchill Downs, no one gives you a handbook that explains how every training decision will suddenly be hyper-scrutinized and second-guessed or how becoming famous literally overnight can wreak havoc on one's well-being.

But for now, Rich Strike and his people are entitled to bask.

Asked to articulate how the “win for the little guy” impacts the morale of the sport, Dawson put it this way:

“It's got to be a feel-good story,” the owner of the Derby winner said. “And I hope everybody takes it that way. I feel like the luckiest man alive. That's actually my nickname. So, sorry–I can't help it.”