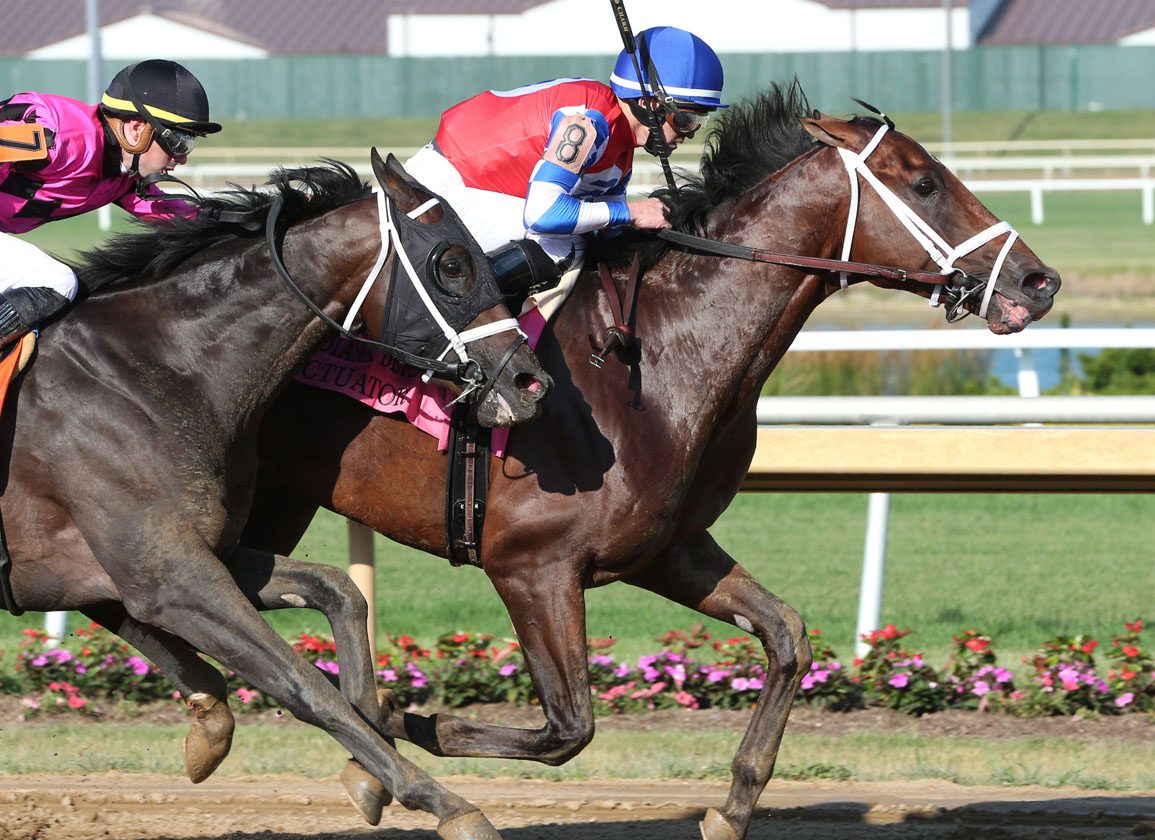 Third in his first two tries on grass for trainer Rodolphe Brisset at Horseshoe Indianapolis last term, including going a mile in his juvenile finale Oct. 6, he returned from the bench to air in his dirt debut going seven furlongs in his first try for trainer Michael McCarthy at Churchill Downs last time June 8.

With Black Type Thoroughbreds acquiring a 75-percent controlling interest since, 3-1 third-choice Actuator broke inward at the start from his outside draw here. Favored GISW Rattle N Roll (Connect), drawn two to his inside, took the worst of it at the break, clipping heels while getting bumped from both sides with rider Brian Hernandez, Jr. briefly losing the irons.

Actuator, meanwhile, raced in an outside fourth while rounding the clubhouse turn. Chasing from third while three deep heading down the backstretch, the bay was ridden to keep pace on the far turn, challenged from the outside while racing a bit greenly with his lead change as they straightened and dug down deep in the stretch to hold Best Actor (Flatter) safe while brushing with that rival inside the sixteenth pole.

Actuator survived a steward's inquiry involving the start and also an objection lodged by jockey Florent Geroux aboard the runner-up alleging interference in deep stretch.

“I don't know where I interfered with him,” winning jockey James Graham said. “He did break in a little bit, but his horse didn't break either. We kind of made contact. But that's the first jump. I grabbed him immediately and he actually came and leaned on me the last sixteenth. My horse ran his race. He showed a lot of grit and tenacity today, so I'm happy with that.”

McCarthy added, “He didn't get away from there great, but James was able to go ahead and get us into a great spot going into the first turn. Up the backside, he was sitting right off the speed and around the turn. James asked him to pick it up, and he slowly got into a rhythm. He was game through the lane.”

McCarthy continued, “Everybody was quietly confident. I thought his performance off the layoff was very, very good. The horse came back and trained well after his maiden score. Jake Ballis and his partners were very keen to get in on the horse. I thought there were bigger and better things to come with him.”

Actuator is the 11th graded/26th stakes winner for former WinStar stallion and current Jockey Club of Turkey resident Bodemeister. Like Bodemeister's 2022 GII American Turf S. winner Stolen Base, Actuator is also out of an Indian Charlie mare. Indian Charlie is now responsible for 30 graded/90 stakes winners as a broodmare sire. The E. Paul Robsham-bred Indian Rocket, a winner of two of 16 career starts, was a $175,000 KEENOV weanling. The half-sister to GISW and GI Breeders' Cup Juvenile Fillies runner-up R Heat Lightning (Trippi) passed away in 2019. Actuator was her final produce.