Zulueta Gets 33 Months in Prison 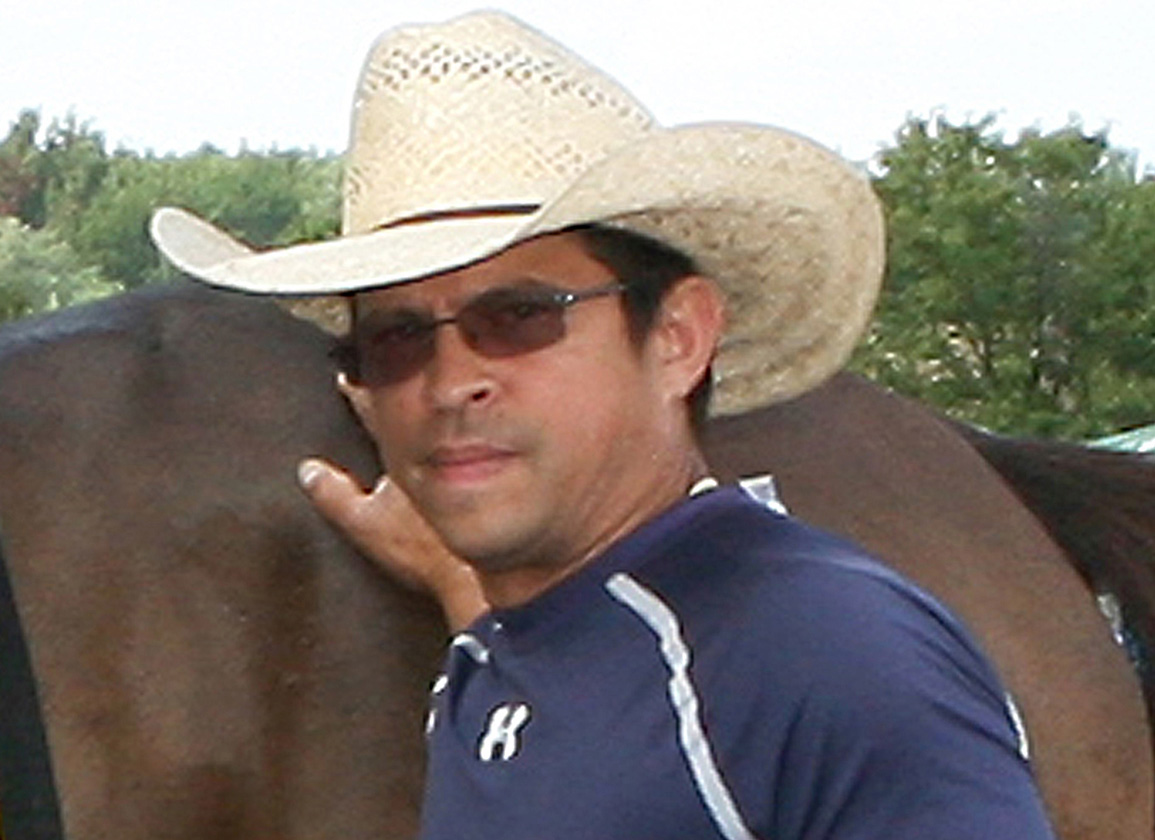 Marcos Zulueta, the former mid-Atlantic-based trainer with an abnormally high win percentage who was caught on wiretaps procuring drugs for and boasting about Thoroughbred performance-enhancing regimens with the convicted horse doper Jorge Navarro, was sentenced to 33 months in federal prison on Thursday.

Zulueta, 53, had pleaded guilty in October to one felony count of adulterating and misbranding drugs with the intent to defraud or mislead.

As part of a plea agreement, he had previously agreed to forfeit $47,525.

At his Feb. 24 sentencing, the remaining two open felony charges against him were dropped, which was also part of the agreement.

At the time of his guilty plea in in United States District Court (Southern District of New York), it was announced that Zulueta faced up to five years in prison. But because the statutory maximum for his crime was three years, prosecutors and the defense ended up agreeing that based on federal sentencing guidelines, his actual range called for 30 to 36 months.

However, subsequent to that agreement, when a routine presentence investigation report revealed (unbeknownst to prosecutors) that Zulueta got convicted in 2018 for driving while intoxicated while already on probation for another offense, it triggered an increase in his criminal history calculation for the doping offense, so his minimum sentence based on the guidelines got bumped up to 33 months instead of 30.

The feds had advocated for a sentence within that range; the defense argued for a variance that would allow for a sentence below the guidelines. Judge Mary Kay Vyskocil gave the minimum allowable sentence.

A separate presentencing report issued by the feds included snippets of secretly recorded phone conversations between Zulueta and Navarro.

In some of those starkly candid discussions, Zulueta admitted to fears that he was admitting purportedly performance-enhancing drugs (PEDs) so recklessly that he was afraid he was going to kill his own horses, either by injecting medications improperly or performing nasogastric tubing that went into the lungs instead of the stomach.

“I didn't want to tell you because you were going to [expletive] scold me,” Zulueta admitted to Navarro in an intercepted May 5, 2019, phone call. “I got creative, I gave them more medicine but I drown them–I drown them instead…. I didn't tell you about it because I knew you were going to get on my back…. I lost [expletive] lots [of] money. But, well, forget it–that's done.”

According to the government, Navarro had already warned Zulueta at least once to tone down his doping.

“Marcos, we need to clean up things because they are going to [expletive] us up. They are going to kick us out of the business if we keep up with the craziness,” Navarro said in a Mar. 10, 2019, call.

Zulueta agreed with Navarro, and Navarro persisted, “You have already made money…. Stop inventing [new ways to drug horses].”

Yet on other occasions, it was Zulueta who cautioned Navarro about keeping a lower profile.

“Yeah, you should be happy–happy–happy that you are not winning all of them,” Zulueta said, according to a wiretap transcript. “Otherwise, you will be arrested.”

Zulueta's words ended up being prophetic: On March 9, 2020, both trainers, plus several dozen others, were taken into federal custody in a coordinated series of arrests related to an international racehorse doping conspiracy. Listed below are the Thoroughbred-related guilty pleas and convictions that have resulted so far:

In March 2021, the guilty-pleading Scott Robinson, a veterinarian, got 18 months in prison and had to forfeit $3.8 million in profits.

In June, Sarah Izhaki was sentenced to time already served for selling misbranded versions of Epogen.

In September, Scott Mangini, a pharmacist who had pleaded guilty to one felony count related to creating custom drugs for racehorses, got sentenced to 18 months in prison and a forfeiture of $8.1 million.

In December, Navarro wept in court after getting the maximum sentence of five years imprisonment. Navarro had pleaded guilty to one count of conspiring to administer non-FDA-approved, misbranded and adulterated drugs, including PEDs. Navarro was also ordered to pay $25.8 million in restitution (an amount he will likely never be able to pay) and could face deportation to Panama.

On Jan. 5, 2022, Kristian Rhein, a veterinarian formerly based at Belmont Park, got sentenced to the maximum three years in prison after pleading guilty to one felony drug charge. Rhein must forfeit $1.02 million and pay $729,716 in victims' restitution.

On Jan. 6, Rhein's brother-in-law, Michael Kegley Jr., the former sales director for a Kentucky-based company that marketed and sold the alleged PED known as SGF-1000, got sentenced to 30 months in prison and a $3.3 million forfeiture.

The Florida-based veterinarian Seth Fishman faces 20 years in prison after being found guilty Feb. 2 on two counts of conspiring to violate adulteration and misbranding laws.

Although not a “headline” trainer like the graded stakes-winning conditioners Navarro or Jason Servis (who maintains he is not guilty and has a trial date looming), Zulueta won an outsized number of races on smaller circuits. In early 2020, just prior to his arrest, Zulueta's horses were winning at a gaudy 31% clip, primarily at Parx.

“Until the time of his involvement in the activity charged in the Indictment, Marcos Zulueta was an American success story,” his legal team wrote in a presentencing report.

“Born in Cuba in 1968, he experienced a very difficult and impoverished childhood,” the defense report continued. “His father left his family when Marcos was one. As the oldest of his brothers and sisters, it fell on Marcos' shoulders to work to support his family. He engaged in all forms of manual labor and finally became proficient in working with horses, with the money he earned going straight back to his family.

“With the goal of escaping the restrictions and deprivation of freedom in Cuba, Marcos emigrated to the United States in 1994 [and in 2011] became a successful horse trainer. Aside from a DUI and two summary offenses committed in a brief time frame, Marcos led a crime free life…”

The feds framed Zulueta's story differently in their own presentencing report:

“Although Zulueta did not earn as much in purse winnings as other defendants in this matter, including his co-conspirator Jorge Navarro, he nonetheless engaged in precisely the same conduct as Navarro: (1) procuring a variety of PEDs with which to dope his racehorses, including blood builders; (2) redistributing certain PEDs to other trainers, such as Navarro; (3) experimenting with novel PEDs by administering them to the horses under his care; (4) 'cleaning' the livers of horses he had doped to counteract the deleterious effects of his doping; and (5) using dangerous methods of administration, such as 'drenching.'”

The prosecution's report continued: “Zulueta was so attuned to the dangers of his conduct that he was reluctant to tell even Navarro–his co-conspirator, a trusted friend, and a prolific doper–that he had over-medicated his horses. Zulueta's private conversations underscore the callousness he displayed to the horses under his care…”

The feds further argued that “As with other defendants in this matter, it is not the case that the defendant's crime was the result of a single lapse in judgment, nor is it the case that he ceased his criminal conduct of his own volition. Zulueta continued to order and receive PEDs up until shortly before his arrest, and there is no indication that he would have otherwise stopped.”

Zulueta reports to prison May 24. The judge has recommended he be incarcerated at Fairton, a medium-security facility in New Jersey.