Zedan Back and Still Dreaming Big with High-Priced Juvenile Purchases 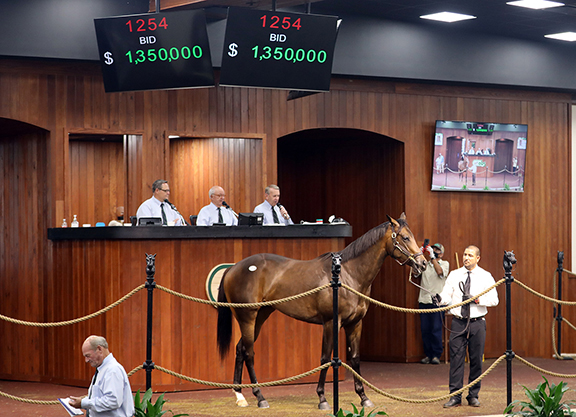 When Amr Zedan's first involvement with horse racing came as a partner in G1 Dubai World Cup winner California Chrome (Lucky Pulpit), the Saudi businessman assumed he'd found an easy game and jumped in with both feet with several notable purchases at the 2017 juvenile sales. But the group failed to find the success he dreamed of and he decided to take a step back and regroup. After a meeting with legendary trainer Bob Baffert two years ago and a nudge from his wife, Princess Noor bint Asem, Zedan decided to refocus on the sport and his return has been punctuated this spring by the $1.35-million sale-topping purchase of a filly by Not This Time (hip 1254) at last month's OBS Spring Sale and the $875,000 purchase of a colt by Candy Ride (Arg) (hip 443) at this week's Fasig-Tipton Midlantic Sale.

“I was a partner in California Chrome. That's when I caught the bug,” Zedan said from his home in Saudi Arabia Thursday. “And from there, I pivoted to North America and I worked with Dennis O'Neill. But we were very unlucky. We had a lot of horses, but a lot of them didn't run or break their maiden.”

He continued, “The problem is that I first tasted the sport on top in winning the Dubai World Cup with California Chrome. That's when I came in. I thought that would be the norm. And everything else would be easy-winning a Group 1 is nothing. Little did I know I was spending a lot of money there and then I realized it is a very hard sport. It's a crap shoot. It takes a lot of luck, but you can maximize the return by being scientific about it and having the right people.”

That's when Baffert entered the scene.

“I met with Bob at the Dubai World Cup two years ago,” Zedan said. “We had a conversation and it just materialized. And my wife really wanted me to stay at it, so she kind of pushed me.”

On the recommendation of California Chrome's jockey Victor Espinoza, bloodstock agent Gary Young joined the team and handled bidding duties at OBS and in Timonium.

“With the team we have assembled, with Gary on the ground and Bob at the background, it gives me confidence,” Zedan said. “I was contemplating just taking a backseat with it until I figured out what I wanted to do. If it wasn't for Bob and the confidence I have in him, I wouldn't be doing this. Bob needs to approve it and if he says go ahead, we go. That's how we are working. Let's see, maybe we'll have success, maybe we won't, but at least we gave it our best shot.”

When Zedan was buying horses in 2017, he admitted his goal in the sport was to win the GI Kentucky Derby. The Run for the Roses remains his primary focus in his return to the sport and he's willing to play at the highest levels to achieve that goal.

“We have decided to very carefully pick horses who are pretty much Derby types and horses that could go two turns,” he said. “That's pretty much our strategy. We are not in it for sprinters or one-turn horses. I love racing, but I want to do it right. My motto is go big or go home. My goal is the Derby.”

Zedan's first major purchase for the new incarnation of his racing stable came last month when he purchased the sale-topping filly for $1.35 million at OBS. From the first crop of Taylor Made stallion Not This Time, the juvenile had zipped through a quarter-mile work in :20 1/5 at the auction's under-tack preview.

“Frank Taylor actually pointed her out to me,” Zedan said. “And I've always been intrigued by Not This Time since he finished second in the [GI Breeders' Cup] Juvenile. So when the filly came in and everyone was raving about her work, I spoke to Bob. Bob said, 'She's a good horse, not bad, let's consider her.' But then when Bob saw her, he said, 'We cannot leave without this horse.' So I told Gary, 'Let's see what we can do.' I was texting Bob and I said, 'This is our horse, get her.' Again, if Bob says we need her, we bring her home.”

“She is doing what Bob wants her to do,” Zedan said of early reports on the filly. “The key is to let the horse tell us what she wants us to do with her. So far she has been progressive. Bob has her on a schedule. As to what that schedule means for her debut, I really do not know. I do not get involved at all when it comes to training her. If there is a win in her, rest assured Bob is going to get it out of her. It's all in Bob's hands.”

The sale-topping filly still has no name, but Zedan is contemplating naming her after his wife, the great granddaughter of King Abdullah I of Jordan whom he married in 2018. But the princess isn't so convinced.

“I wanted to name the filly after my wife, but she got upset. She said that was kind of tacky,” Zedan said. “So I call the filly Princess Noor in my mind. But we're still playing with names.”

Zedan added a colt by Candy Ride to his stable Tuesday in Timonium, but this time it was Young who really wanted to go home with the youngster.

“Bob's opinion of him was, 'If you're looking for a Derby-type horse, that horse ticks major boxes. We'll put in a range and let's see if he falls in that range.' Gary, on the other hand, was like a kid in a candy store with that horse. Had he left without that horse, he would have been crying.”

Of the colt, Zedan added, “If he is what we hope he is, that will be great.”

The 45-year-old Zedan was born in Los Angeles while his parents were studying at the University of Southern California in 1972. His family returned to Saudi Arabia in the late 70's, but Zedan returned to the U.S. to study before becoming chairman and CEO of his family's Zedan Group based in Al Khobar. Originally started by his father, the business specialized in engineering, but under the younger Zedan's leadership it now includes a number of companies that not only focus on engineering, but also infrastructure, power and water and oil, gas and petrochemicals.

His interest in horses first started with polo and he is the head of and a player for the Dubai-based Zedan Polo, as well as chairman of the Saudi Polo Federation.

Between his responsibilities at home and the travel restrictions due to the coronavirus pandemic, Zedan has yet to see his new acquisitions, but he trusts in the team he has put in place.

“I get the itch to be there, but it is hard with my time being extremely limited here and being in this part of the world, and obviously the coronavirus situation,” Zedan said. “But Bob has the final say and Gary knows exactly what Bob likes. We all come together and make a decision and I think we have a good system. As long as that system works and as long as we have Bob Baffert basically okaying the final horse, we are happy. I am happy with them sharing videos [of the horses]. Hopefully when they get to the races–I don't want to jinx them or get ahead of ourselves–but when one of our horses gets to the races, we are going to be there, hopefully.”

Zedan said he would not be limiting his purchases to the 2-year-old sales and hopes to attend the yearling sales for the first time this fall.

“I really haven't been there for the yearling sales yet and I'm developing a taste for yearlings,” he said. “I don't mind buying a couple of yearlings and seeing how they do. I am inclined to do it. Bob enjoys the yearlings and he has had success buying yearlings. It really depends on what is available. I think we've hit the target for this year. We were looking for the best filly at the sale and I think we hopefully, God willing, have found her. And we were looking to complement her with a good 2-year-old colt and I think we managed, in my opinion, to buy one of the best colts in the Fasig-Tipton sale.”

Zedan is clearly a man ready for big accomplishments in the sport. True the Derby dream is up front, but it doesn't end there.

But he quickly added, “Hopefully a Triple Crown, too. If I get the Derby, I'll be happy, but then I want the next big one, and the Triple Crown. And then I want to do the Triple Crown again. It never stops. You can't say it's impossible [after American Pharoah and Justify]-with two different owners, I give you that-but again you have the greatest trainer that the sport has ever seen. And you have him picking the horses you buy and you have a team you trust.”

He continued, “We were very unlucky the first time. And now we created a new formula. My role now is to pay the bills and Bob does everything else. If Bob wants a horse, we get a horse no matter what it costs.”