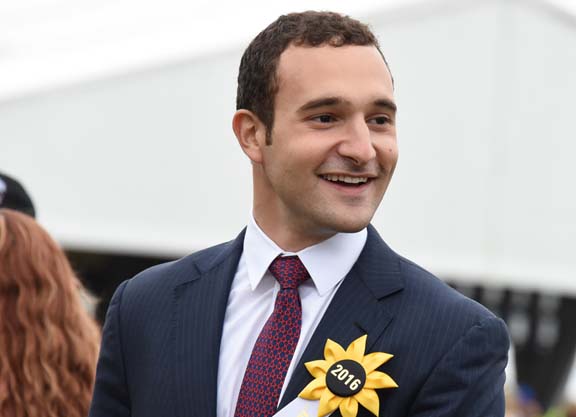 Zayat Stables, known more for racing than selling, will test the juvenile sales market scene with six horses purchased by the operation as yearlings last fall expected to go under the hammer at the Mar. 1 Fasig-Tipton Gulfstream Sale and a further 10 juveniles catalogued for the OBS March Sale two weeks later.

“It’s new for us,” Justin Zayat said. “We’re looking into doing new things. We really don’t have a plan and there is no gun to our head to sell any of these. We’re not entering horses just to run them through the ring, we are going to end up selling some, but whether we sell a piece of them, that’s an option, maintaining an interest to race is an option. So really, we’re just seeing where the market is and taking it from there.”

Zayat admitted the decision to offer the youngsters was a last-minute affair.

“Honestly, it wasn’t something we were thinking about at the yearling sales [last year],” he explained. “My dad [Ahmed Zayat] and I just decided at the entry time to sell. The McKathans were asking if we were going to sell anything and I told them no and then I called and they said, ‘What do you mean? The deadline is coming up.’ So this is nothing we had planned. We just wanted to see where the industry was going as a whole.”

The highest-priced yearling purchase in the Zayats’ Fasig contingent is a colt by Awesome Again, who sells as hip 87. Out of multiple stakes placed Kiss the Lady (Quiet American), the bay colt was a $400,000 Fasig-Tipton Saratoga acquisition. Also in the group is hip 28, a son of Into Mischief out of Broadway Lullaby (Songandaprayer), who was purchased for $250,000 at last year’s Keeneland September sale. The Gulfstream line-up is rounded out by: hip 21, a colt by Tale of the Cat; hip 118, a son of Bodemeister; hip 132, a filly by Pioneerof the Nile; and hip 134, a colt by Into Mischief.

The Zayats’ OBS March offerings include four of the top 10 highest-priced previously sold juveniles in the catalogue, led by hip 660, a colt by Giant’s Causeway who cost $675,000 at Keeneland September.

“When you take a $400,000 yearling and bring them to the 2-year-old sales, sometimes people may look at you like you have two heads,” Zayat acknowledged. “But one thing I’ve learned is that everyone going to these sales is very, very sharp and they know a good horse from a bad horse, so I entered the best horses we have on our farm right now. We want to see where the chips fall.”

The horses fit the mold of the typical type of yearling Zayat Stables tries to buy.

“We buy two-turn Classic horses–that’s what we like to buy when we go to auction,” Zayat said. “Horses who look like athletes and have the pedigree behind them. Since we typically buy two-turn horses, I don’t know if our horses are going to be working :09 flats like some of them, but they’ll shine. I’m very confident the horses that we are bringing to the sale are going to make a lot of noise. People are going to love them. They are by proven stallions and also by upcoming stallions.”

With less than a week to sale time, Zayat couldn’t be happier with how his sales horses are doing and he has big expectations for the group.

“All of the horses are training well, they vetted well and we are looking forward to a really good sale,” he said. “I wouldn’t be surprised, honestly, if we topped both sales. We’re coming in with good horses. As long as they breeze well and they show well on the shank, they should do really well. No ego, saying that, but I wouldn’t be surprised because I know what we are bringing over. We’re bringing over fancy horses.”

One juvenile catalogued for the Fasig-Tipton sale who didn’t make the trip to Gulfstream is a son of Frankel (GB) (hip 98) purchased by Zayat Stables for €410,000 at last summer’s Arqana August sale. Out of Manerbe (Unbridled’s Song), the 2-year-old is a half-brother to group placed Marbre Rose (Ire) (Smart Strike).

“I love that horse so much, I told my dad he could not sell that one,” Zayat laughed. “He has a very interesting pedigree. He’s not a typical Frankel. He’s got a very American pedigree–he’s out of an Unbridled’s Song mare. He breezed already on the farm and he worked really well over the dirt. Obviously, in the back of my mind, Frankel is probably is going to be a grass horse, especially out of an Unbridled’s Song mare, but he is training really well on the dirt and we decided we really didn’t want to sell this horse. I don’t know who he is going to go to, but he’ll be with some top trainer. He’s doing really well and we are going to race him ourselves.”

Zayat said the family is keep its options about future plans open, but he expects they will continue to be active sellers.

“We are going to see what happens,” he explained. “Selling a lot of yearlings is something we might be interested in doing. This is a game of buying and selling horses. You have to trade horses–you have to buy and sell and that’s what we do every day. We are really trying new things and we’ll see how it goes. We are playing it day by day. As a trainer would say, we’re letting the horses tell us.”

In addition to its activity in the sales ring, Zayat Stables will still maintain its high-class racing stable. Zayat said the stable’s current 2-year-old crop numbers 65, so there will be plenty of potential stars to carry the family’s turquoise and yellow colors.

“We enjoy racing and all our intentions are to keep racing,” he confirmed.

The operation is also reveling in the arrival of the first foals of its Triple Crown hero American Pharoah.

“Every day I go on twitter, someone else tweets a photo of another American Pharoah foal at me,” Zayat laughed. “They all look very athletic and everyone is very happy about them. I miss him being on the racetrack. So now to see his offspring come along and the little ones that we have that resemble him, they make you dream.”