Zayat Looks for Solomini to Step Forward in Futurity 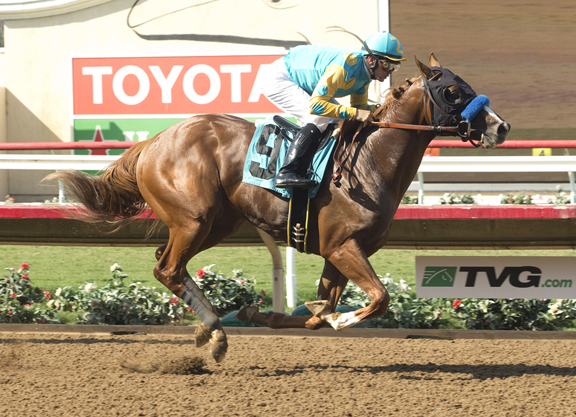 Zayat Stables' Solomini (Curlin), already a runner-up in a pair of Grade I race in just three lifetime starts, will have another chance at a top-level victory when he faces four rivals in the GI Los Alamitos CashCall Futurity Saturday. The Bob Baffert trainee contested the pace before settling for second behind Good Magic (Curlin) in the GI Breeders' Cup Juvenile last time out and connections look for continued improvement Saturday.

“He came out of the Breeders' Cup in good shape and the last couple of weeks he's been training very well,” said Justin Zayat. “Obviously, being by Curlin, he's bred to get better with age. Next year, hopefully, he'll improve and be even better, but right now he's training really well for the Los Al Futurity and we're very happy with him and with the way he's doing.”

Solomini faces stiff competition in the Futurity from his promising stablemate McKinzie (Street Sense), who was tabbed a 'TDN Rising Star' after his 5 1/2-length debut victory at Santa Anita Oct. 28.

“It looks like McKinzie may be a pretty special horse,” Zayat admitted. “On paper, we've done more so far. McKinzie has only had one race and he hasn't gone two turns yet, so he has some questions to answer. But he ran a 5 on the Ragozins first time out. That's pretty sensational for a 2-year-old first time out. If he moves forward off of that, I'm sure he'll be super tough to beat. I know Bob is high on him also. I've been in that position–we had American Pharoah against Dortmund–sometimes you've just got to run against your stablemate.”

After a determined debut victory at Del Mar Sept. 2, Solomini was second behind the highly regarded Bolt d'Oro (Medaglia d'Oro) in the Sept. 30 GI FrontRunner S. He will be making his third start at 1 1/16 miles in the Futurity.

Zayat admitted Solomini's early success has been something of a surprise.

“We always thought he was a nice horse, but we never expected him to win that early on, in his first race,” Zayat said. “Then running in the Grade Is, he kept on stepping up to the plate. The Breeders' Cup was a big test for him to see if he was a really good colt or if he had just run two good races. And he ran a really big race in the Breeders' Cup.”

Solomini is out of the unraced Surf Song (Storm Cat), who is a half-sister to Midshipman and to Fast Cookie (Deputy Minister), dam of Grade I winner Frosted (Tapit). The Zayats purchased the colt for $270,000 at the 2016 Keeneland September Yearling Sale. And, while the family had plenty of success pinhooking juveniles this past spring, Solomini was not under consideration for resale.

“He actually wasn't one we thought about it,” Zayat said. “We had another Curlin that we took instead of him. On the day that we bought him, for some reason, I just fell in love with him. I always thought something was special about him. I always had a good feeling about him, especially with his pedigree. He's out of a Storm Cat mare and you don't see that many of them out there anymore. It's a very deep pedigree with Frosted down there, so he's an exciting prospect.”

In preparation for the Futurity, Solomini worked five furlongs in 1:01 4/5 Sunday at Santa Anita.

“It's a good position to be in at this time of year,” Zayat said of having a promising juvenile. “It lets us dream a little bit. Hopefully, he'll do something good Saturday and we can continue the dream.”