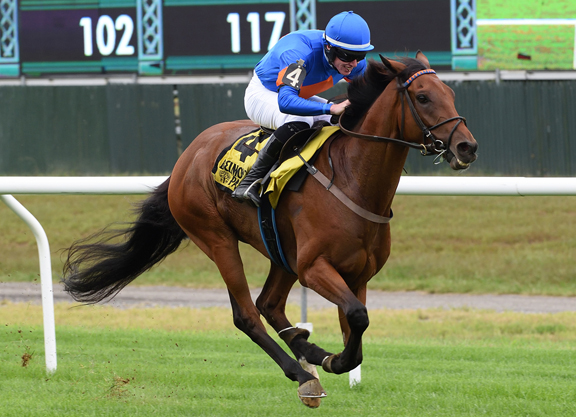 Saratoga Race Course's big-money races are hard to ignore, but trainer Ricky Hendriks had a plan for Zanjabeel (GB) (Aussie Rules) after his relatively easy victory in the G1 Calvin Houghland Iroquois in May.

The ultimate goal is to get to the Far Hills Race' G1 $450,000 Grand National Oct. 20, with Belmont Park's G1 $175,000 Lonesome Glory H. a necessary and desirable step along the way. That was the plan, and Hendriks was sticking to it.

The first goal was accomplished Thursday when Zanjabeel turned back a strong challenge from Hinterland (Fr) (Poliglote {GB}) deep in Belmont's stretch to win by 1 3/4 lengths, with Hendriks-trained Optimus Prime (Fr) (Deportivo {GB}) a neck farther back in third.

Hendriks understandably was pleased with the effort by Zanjabeel, who is owned by the Rosbrian Farm of Mandy and George Mahoney and the Meadow Run Farm of Wendy and Ben Griswold, who purchased him after his victory in Far Hills' Foxbrook Champion Hurdle last year and turned him over to Hendriks.

“We were tickled to death with Zanjabeel coming off the layoff,” Hendriks said. “You just never know how horses are going to run coming off the layoff. We've only had him for about a year, so we don't know him as well as some of the other horses, but he ran a super race.”

At the start of the Lonesome Glory, Clarcam (Fr) (Califet {Fr})–owned by Rosbrian and Meadow Run–went to the lead with Optimus Prime close behind him and Zanjabeel in third or fourth position. Clarcam, trained by Irish horseman Gordon Elliott, led over the last fence, located on Belmont's backstretch.

But Kennedy had Zanjabeel on the move on the inside, and they seized the lead as the field of eight turned into the homestretch. Three Kingdoms (Ire) (Street Cry {Ire}) launched a brief attack, but the serious challenge would be thrown down by Hinterland.

Sean McDermott was getting everything from Hinterland, and Kennedy, sensing the attack, went to work on Zanjabeel. With a furious drive to the finish line, Zanjabeel retained his margin over his challenger.

Kennedy said he was surprised by how much stronger Zanjabeel had become since Far Hills, and he was pleased with his trip in the Lonesome Glory.

“I had a lovely position,” Kennedy said. “He jumped great and traveled very well. He kicked on well off a steady pace. He did everything very well.”