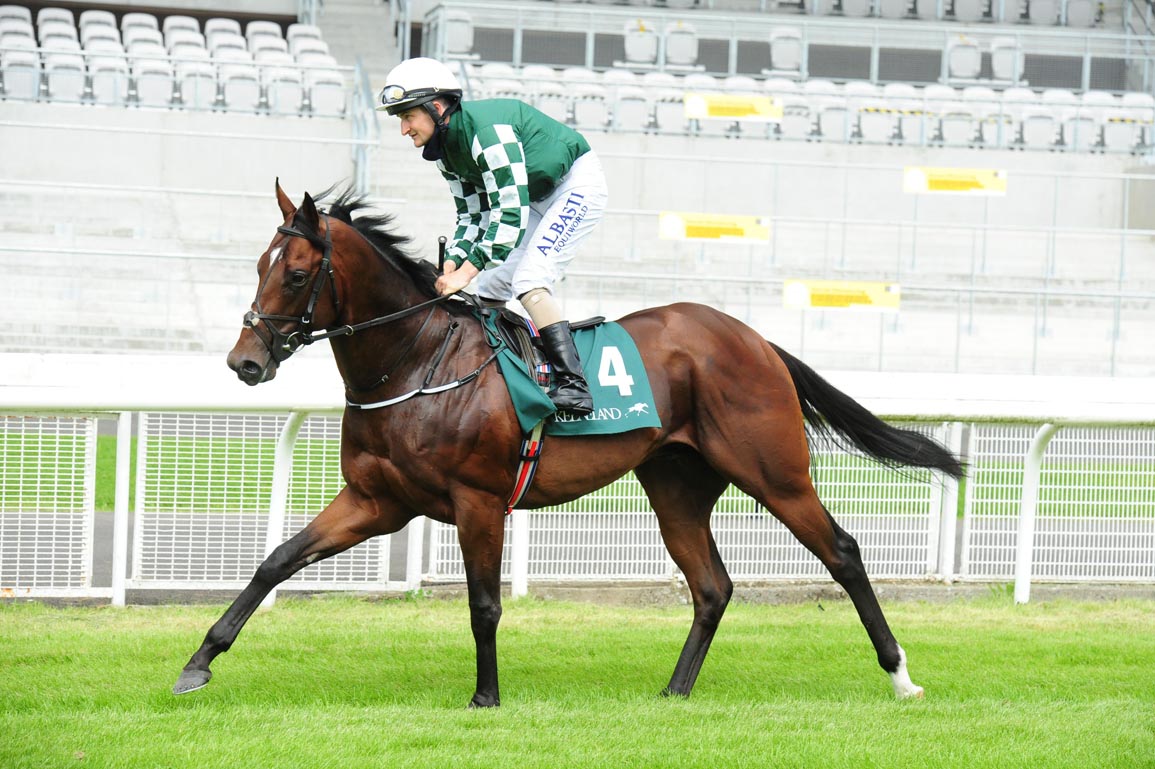 When a colt retires to stud, a regular theme of the promotional drive to attract mares involves a bullish statement by the owner pledging to support the stallion with their own mares, as well as a commitment to invest in the stallion's progeny at the foal and yearling sales. Yulong Investments' Yuesheng Zhang has hit the ground running with his commitment to his young sire Lucky Vega (Ire), who kicks off his Northern Hemisphere stallion duties at the Irish National Stud early in 2022. Spearheaded by BBA Ireland's Mick Donohoe, Zhang's Yulong Investments began a shopping spree for mares in earnest at Goffs last month, where its near €2-million spend included the €825,000 sale topper Plying (Hard Spun)–already the dam of a brilliant performer in Alcohol Free (Ire) (No Nay Never)–along with a number of other 'blue hen' types all purchased to visit Lucky Vega.

The investment continued at Tattersalls and Arqana, where again seven-figure sums were put on the table to assemble what looks like being a stellar book of mares for the Group 1-winning son of Lope De Vega (Ire).

“In fairness to Mr. Zhang, he's a great man and he realises the potential Lucky Vega has in both hemispheres and he wants to give him the best chance of being a success at stud,” Mick Donohoe said. “He wanted to target those nice stakes-producing mares, and obviously Plying was an standout one to try and buy. She is still a young mare and already is the dam of two stakes winners including Alcohol Free, who is a Group 1-winning 2-year-old and a proper top-class filly, and there aren't too many first-season sires being sent that type of mare.”

“We all know what Galileo can do as a broodmare sire; I don't think there will be an equal to him for many years so we were keen to stock up on them,” Donohoe said. “We then bought seven or eight high-end mares at Tattersalls, including a few more by Galileo as well as mares by Pivotal (GB) and Siyouni (Fr), so it is very exciting.”

Among the Tattersalls acquisitions was Class Act (Ire) (Galileo {Ire}), a half-sister to stakes winner Most Beautiful (GB) (Canford Cliffs {Ire}) offered in foal to Wootton Bassett (GB); and Rose D'Etoile (Ire) (Zoffany {Ire}), a stakes-placed mare carrying to the same sire. Donohoe said some of the foals the mares are currently carrying could go through sales rings.

“Mr. Zhang is running a business and in Australia he sells a lot of yearlings, so I imagine he will follow a similar path over here,” he said. “Obviously I'll have to talk to Mr. Zhang and Sam [Fairgray] and see what the long term goal is, but I would say a lot of the progeny would be offered for sale. He is a trader and he wants it to be as viable a business as possible, so I imagine that will be the plan.”

Galileo was again to the fore when an energised Donohoe continued on to Arqana for Europe's final flat breeding stock sale of 2021, and it was two daughters of the late, great stallion that featured among another significant spending spree. The stakes winner Ame Celeste (Ire) (Galileo {Ire}) and It's Magic (Ire) (Galileo {Ire}), a half-sister to Mukhadram (GB), are both slated for Lucky Vega when they deliver their respective Siyouni (Fr) foals early next year. Donohoe again went down the tried and tested route of buying a Pivotal (GB) mare when purchasing the well-bred Duet (GB) (Pivotal {GB}), who is in foal to Blue Point (Ire).

“We bought some gorgeous mares in France and as well as the Galileos and the Pivotal, we also got a lovely mare called Pink Paint (Fr) by Redoute's Choice (Aus) from the family of Peintre Celebre,” Donohoe said. “She cost €130,000 in foal to Almanzor (Fr) and we think she was well bought, as she is a winner and comes from a fantastic deep family. They are all lovely purchases and being in foal to such high-class stallions, they could be carrying future champions already.”

“Mr. Zhang is very much of the mindset about breeding Classic horses rather than just early maturing fast 2-year-olds, hence the investment in the Galileo mares,” Donohoe added. “We know Lucky Vega could probably have stayed a mile and a quarter if we had asked him to, but he was more of a speedy miler than anything. He showed amazing speed to win his Group 1 over six furlongs as a 2-year-old when he sprinted away from them, so he should be a good speed influence for those Galileo mares.”

Despite such an accumulation of stock in recent times, Yulong has not yet dipped its toe into land investment in Ireland, preferring instead to outsource the boarding of mares and young stock.

“The majority of the mares are with Bill Dwan in Castlebridge and Mr. Zhang doesn't really have the appetite at the moment to buy his own farm in Ireland. His main interest is in Australia and there hasn't been any talk of buying somewhere here. There are around 30 mares in Ireland and at that level he's happy enough to board them with top-class people such as Bill.”

If Zhang were someday to develop a European base, one can be sure it would be a project carried out to the highest standards, Donohoe said. “I've seen it already with other projects he has undertaken, whether it's building that magnificent farm in Melbourne, acquiring some top-class stallions like Written Tycoon (Aus), or developing that fantastic training facility in mainland China; Mr. Zhang has the means and the expertise to get things done and to do them right,” he said. “He also has a very good guy, Sam Fairgray, working with him in Australia, where as I mentioned already his main bloodstock interests lie.”

What this means for Lucky Vega is that he will continue to shuttle between both hemispheres as long as he stays healthy and well, and unusually for a horse born, raised and raced in Ireland, he is technically a reverse shuttler, having been launched in Australia.

“He's done his first season in Australia and he was very popular, especially with anyone who got to see him as he's such a good physical,” Donohoe said. “He is the type of horse that appeals to both Europe and Down Under, as he has that great hindquarter, hip and walk and a lot of those attributes that Australian breeders put importance on.

“As popular as he is in Australia, I think he will be received even better in Ireland as people got to see him run here.”

While that statement is true, there did appear to be an element of unfinished business on the track for Lucky Vega, as he ran only three times as a 3-year-old before he was summoned to Australia in mid-summer for their breeding season. Despite not getting his head in front, he ran with great credit finishing third in the G1 2000 Guineas, then fourth in the Irish version before posting a runner-up spot again behind Poetic Flare (Ire) in the G1 St James's Palace S. at Royal Ascot.

“He retired sound and it was a commercial decision made by Mr. Zhang to send him to Australia, in part to capitalise on the popularity of Lope De Vega down there,” Donohoe said. “The team in Ireland were obviously disappointed to see him go, but we understood the rationale behind the decision. Mr. Zhang is buying these yearling colts and our job is to make stallions out of them, and he was a prime candidate to go and do that even though we firmly believed he could have won at least another Group 1 in the second half of the season.

“I hope Jessie [Harrington] won't mind me saying, but I'm not sure her horses were firing on all cylinders in the early part of the flat season and we might not have even seen Lucky Vega at his very best. He ran a smashing race at Royal Ascot and he proved that he trained on to be a high-class 3-year-old, and that he wasn't just a top juvenile.”

Lucky Vega's placement at the Irish National Stud is also a feather in the cap of Cathal Beale and his team in Kildare. Explaining the link up, Donohoe said, “Mr. Zhang was looking for someone to stand the stallion on his behalf. Apart from that, though, he has been a big supporter of the National Stud over the years, particularly with Invincible Spirit (Ire), a horse he has bought a lot of yearlings by and also sent mares to. Also, the Irish National Stud is a state body, something that Mr. Zhang puts a lot of importance on, so we are very happy with the arrangement. Even from a BBA Ireland point of view, the INS has stood stallions for Ms Patino, who is a long-standing BBA client so it ties in well for all involved.”

With such a powerful and determined team behind him, coupled with Lucky Vega's own inherent credentials, it should be exciting times for all involved, and Donohoe is already looking further down the line. “I'm very much looking forward to buying Lucky Vega's progeny in the coming years and the instructions from Mr. Zhang are to go and try to buy the best of his foals and the best of his yearlings,” he said.