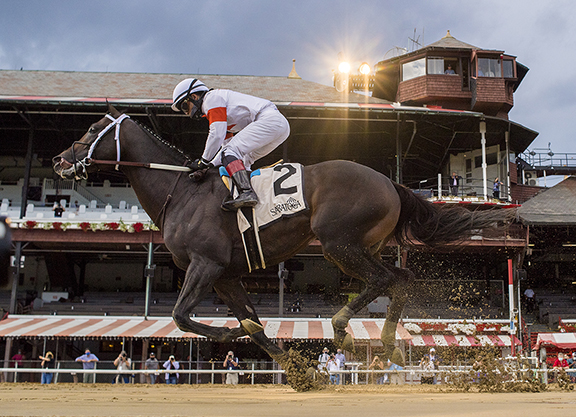 Yaupon took his record to a perfect three-for-three and became the second graded winner of the day for Uncle Mo with a victory in the GII Amsterdam S. Hustled up to the front by Joel Rosario, the dark bay clicked off an opening quarter in :21.93 with Long Weekend giving chase in second. Registering a half-mile in :44.68 with a host of pursuers ranging up menacingly, Yaupon kept on finding over the sloppy going, pulling clear in the lane for a decisive score.

“He's extremely fast. He's got an elite amount of speed,” trainer Steve Asmussen said. “It's very important that a horse with his physical, and as fast as he is, is a graded stakes winner here at Saratoga. I think we can sit down and map out a serious future for him from here.”

As for a potential match-up with stablemate and GI Alfred G. Vanderbilt S. winner Volatile (Violence) in the Breeders' Cup, the Hall of Famer said, “It's maybe why there are different people [jockeys] on them to begin with. He's just that level. We're very fortunate that they're both doing so well.”

Graduating by a nose in his Churchill downs unveiling June 20, Yaupon wired a track-and-trip optional claimer July 18 and breezed a bullet three panels in :37 flat over the Oklahoma Aug. 24. Carrying the same orange and white Heiligbrodt colors as Asmussen's champion sprinter Mitole (Eskendereya), the sophomore was a $355,000 KEESEP yearling, who RNA'd for $485,000 at FTFMAR before selling to these connections for $255,000 at last year's OBS June Sale.

Asmussen explained why the colt did not debut until this year, saying, “He's a 2-year-old that worked :20.3 at Gulfstream for the 2-year-old-in training sale. He had very minor issues, but it was just the physics of it when you're capable of going that fast. We wanted to give him all the maturity we could. We were trying to follow a similar plan with him as we were with Mitole for the Heiligbrodts. They had expected to run him over the winter at the Fair Grounds, but he had another minor issue, so we erred on the side of caution as far as waiting and letting him get to 100%.”

Yaupon is the second 3-year-old son of Uncle Mo to win a graded stake at Saratoga Saturday, following Bye Bye Melvin's win on soft turf in the GIII Saranac S. earlier on the card. He is the 64th black-type victor and 36th graded victor overall for the Coolmore stallion. The winner's dam is GISP Modification, a saughter of SW Swift Alliance (Afleet) and a half to GSW Sky Alliance. Also the dam of MGSP Sawyer Hill, the mare's recent produce includes a yearling filly by American Pharoah and a Good Magic colt born May of this year. The 15-year-old was bred back to Uncle Mo this spring.